In recent decades, more and more traditions dedicated to global holidays have become international. Since Christmas in Slavic countries began to be celebrated relatively recently, our people adopted most of the customs from other cultures. When you learn about the ancient and modern traditions of Christmas in England, you begin to better understand their meaning and origin. 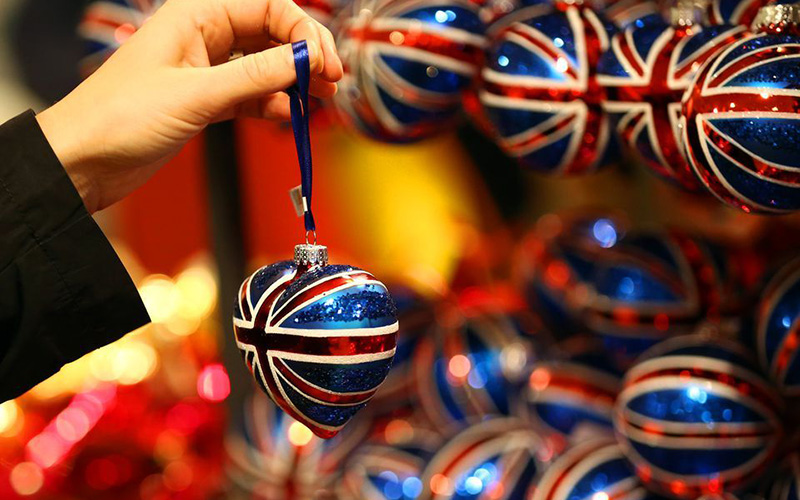 New Year’s Eve in the UK and the rest of Europe is celebrated less actively than Christmas. The elegant spruce also appeared here much earlier, and the British should be grateful for this custom to the wife of Queen Victoria. He himself was from Germany, where all his childhood it was customary to decorate a fir tree for the Christmas holidays. Apparently, having married the Queen of England, the husband felt nostalgic for his homeland, and in 1841 he decided to introduce this custom in his wife’s family.

For several years, the local population liked the idea so much that in every noble palace for Christmas they tried to put a tree more magnificent and slender than their neighbors. Since there was no problem with deforestation at that time, and there were enough coniferous plantations, poor people began to imitate their masters in the same way, who were pleased to feel no worse than the British of noble blood. 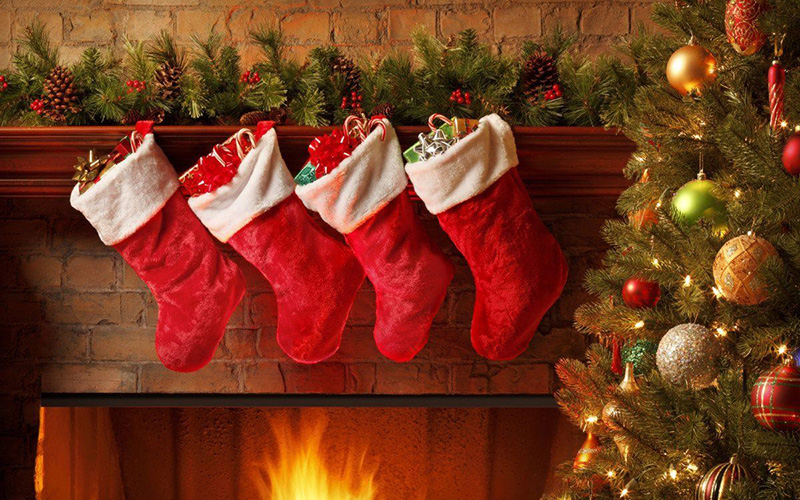 There is nothing surprising in the fact that conifers were chosen as the Christmas tree: they can normally stand for some time in the house after they have been cut down. In addition, among the Druids, these trees were a symbol of endurance in the face of any dangers and, according to legend, they could protect the family from otherworldly evil forces.

Since childhood, we have been accustomed to the red star on top of the spruce. Since it echoed the main symbols in the USSR, after its collapse, many crossed out this decoration from their list of New Year’s Christmas decorations. Therefore, our fellow citizens are very surprised when they learn that the list of Christmas traditions in England also includes a star on top of the tree. 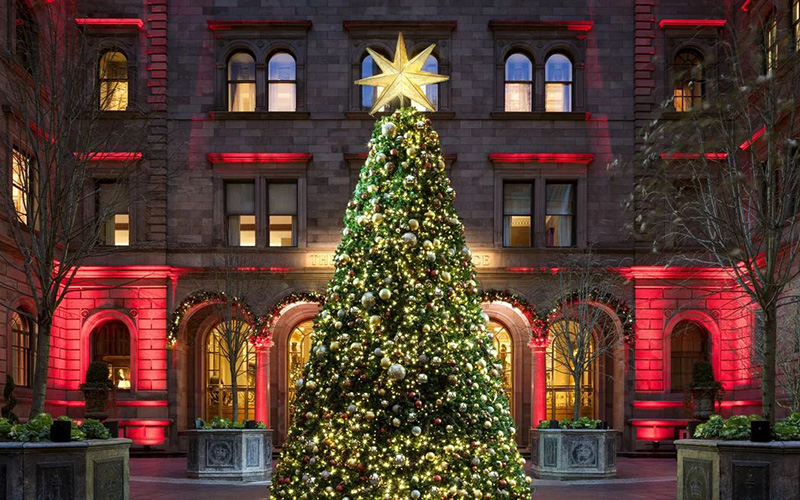 Of course, this has nothing to do with the Red Army. In fact, this decoration symbolizes the Star of Bethlehem, which rose in the sky just at the moment when Christ was born. It is surprising that this religious tradition was adopted from Europe in an atheistic state, but despite the different meanings, our and British Christmas trees look the same in appearance for many decades.

For 150 years in a row, one of the main symbols of Christmas in England was the robin – a bird that we call the robin. She has very bright red feathers on her chest, and people have such plumage in the form of postmen. Most often, postal workers came to each house before the holiday, bringing postcards with congratulations from relatives or friends. Therefore, such a bird became traditional on postcards, and later – a toy on the Christmas tree. And although the plots on the messages to each other in England have long changed, the robin is still considered a symbol of winter among them, just like the bullfinch is among us. 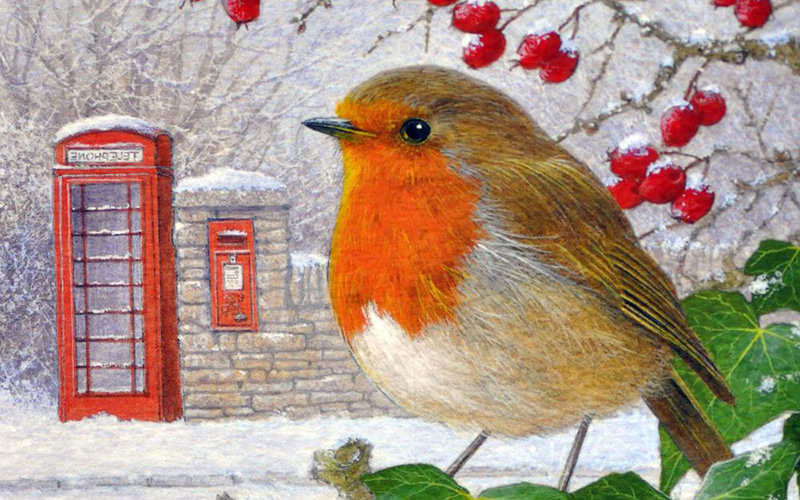 One of the English traditions associated with Christmas is the so-called Advent. The word came from Latin and is translated as “coming.” It is associated with a great fast, which the believers observed for four weeks before the holiday and plentiful feasts. This period was devoted to purification, thoughts about God, tried to do as many good deeds as possible, to prove themselves in charity. Priests during this time dressed in purple clothes, because this color symbolizes repentance. 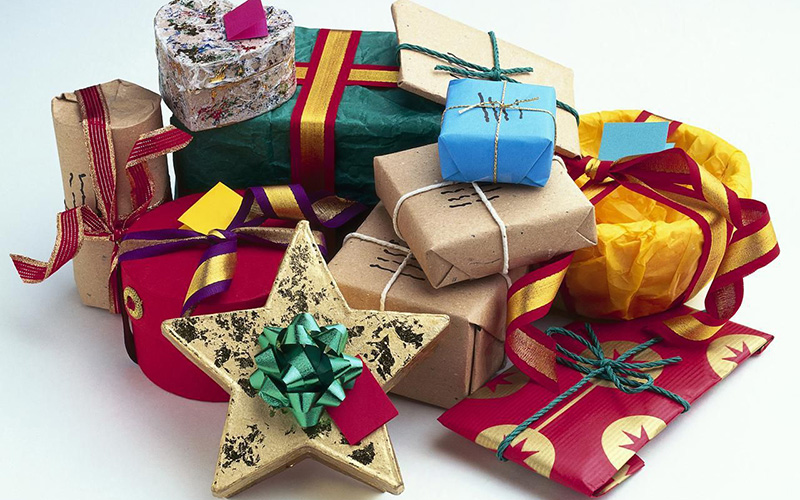 Now this religious English Christmas tradition has been transformed into another preparation – buying gifts, preparing outfits, decorating the house, etc. The daily good deeds of Advent have also been rethought a bit. Now they are presented in the form of an advent calendar, firmly included in the December list of entertainment for Russian children. In this calendar, each date corresponds to some kind of task for the kids. This may be helping parents, memorizing a poem or making a New Year’s toy.

The name of this plant appears in a huge number of English-language Christmas songs. In the days of the Druids, when spruce was not yet the main tree of the holiday, this plant was considered sacred. It was brought into a dwelling to protect people from lightning and bad weather. The value of mistletoe for the Druids increased most on the day of the winter solstice. 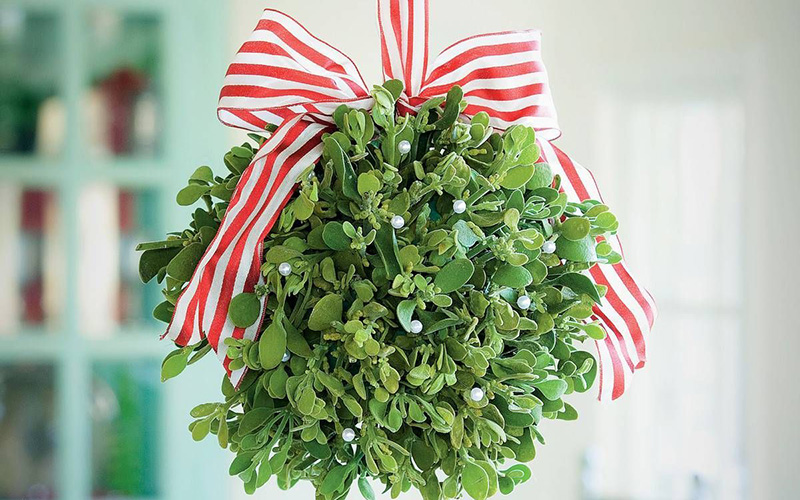 Later, the custom of bringing mistletoe into homes became associated with the New Year holidays. Under this plant, you can kiss any member of the opposite sex, and he will not be able to refuse or be offended for this. After such a kiss under the mistletoe, one berry must be eaten from it. Since there are only two fetuses left, her “magic” action ends, and it is no longer possible to kiss with everyone you meet, hiding behind the old custom. Historians attribute this “frivolous behavior” under the mistletoe to the fact that several centuries ago it was considered conducive to conception.

Everyone has heard about the turkey for Christmas among the British, but this is not the only mandatory treat on the festive table. They have a dish that is prepared just as often on December 25 as we have a herring under a fur coat for the New Year. It is called mince pies and is a sweet dessert. Although the filling is translated from English as “minced meat”, there is no meat in these pies. But there are dried fruits, zest, brandy and traditional winter spices – cinnamon, nutmeg, cloves, etc. 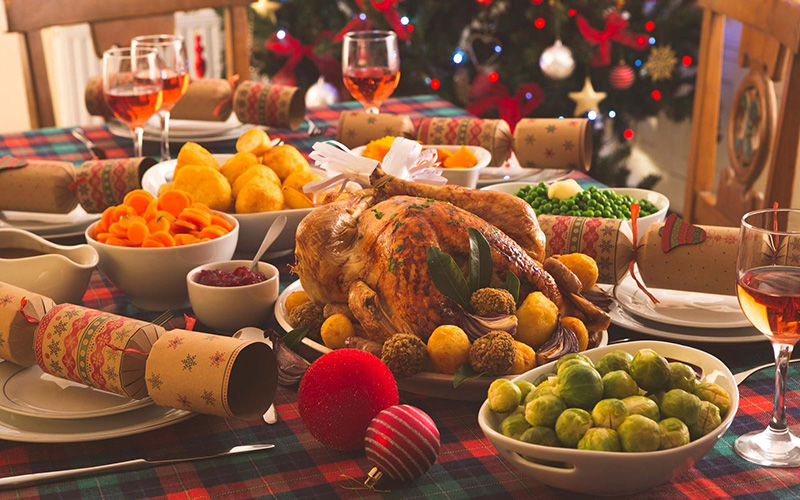 Only a fanatical hostess can master the correct preparation of such a filling, since according to the classic recipe it lasts 4 months. This means that according to tradition, they begin to cook it in early September. This is a very important delicacy, because it is enjoyed not only by all family members, but also by Santa Claus himself. Children put these pies on the eve of the holiday near the fireplace, through which Santa descends to leave gifts. Here, in gratitude for the gifts, the children hide goodies nearby. Of course, the next morning, sweets should not be in place, and parents take care of this after the kids fall asleep. God forbid you forget to remove the pies – this is fraught with huge disappointment and suspicions that Santa Claus does not exist.

A carrot is placed nearby for the reindeer from Santa’s team, so that next year they will not carry the fabulous sleigh past the house.

If children are more waiting for sweets, then adults in the UK have their own traditions for Christmas regarding the festive table. Pigs in blankets is a great name for a winter dish, it translates as “pigs in a blanket”. The role of pigs is performed by sausages, and the role of a blanket is a slice of bacon, in which these sausages are wrapped. They are supplemented with sauces based on cranberries, mustard, onions, etc. In order not to get your hands dirty, this dish is fixed on wooden skewers. 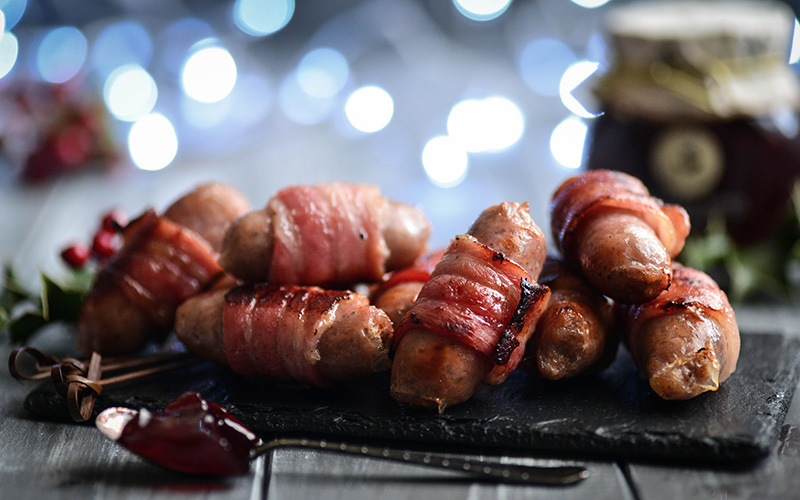 Gifts of the Magi

Among all the customs and traditions at Christmas in England, the most beloved, like ours, are gifts. But the British take a slightly different approach to this issue. Gifts are prepared only for members of their family, not sprayed on everyone else.

But the British are more often aware of where this tradition came from. And it is connected with the gifts of the Magi, which were presented to the newborn son of Mary. That is why gifts are given to children in the first place. 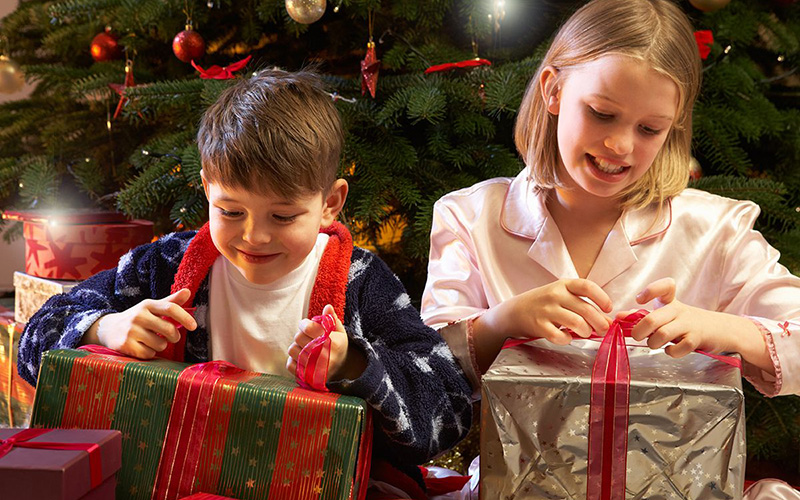 Rarely does a house in England go through the winter holidays without bells. They used to signify the news that the son of God was born. In shape, such bells resemble the vault of heaven, as it was seen hundreds of years ago. 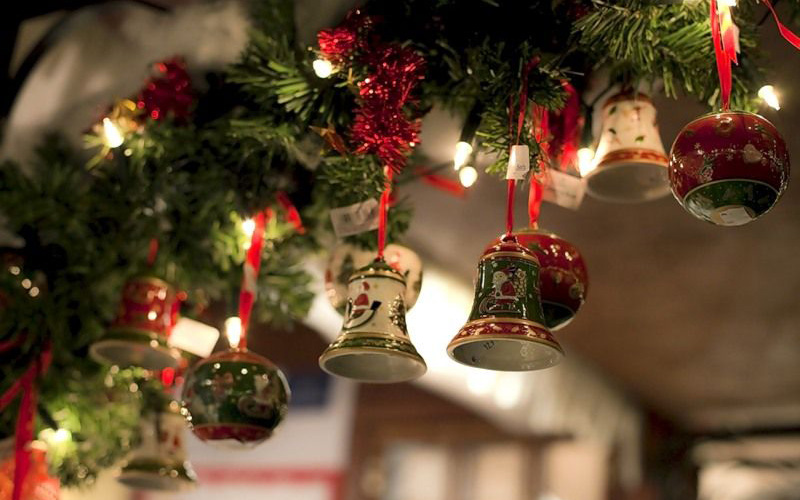 According to tradition, candy canes are placed in gifts for children in England at Christmas. This sweetness has nothing to do with the staff. Its author back in the 17th century was a priest who was prevented from celebrating a long mass at Christmas by impatient noisy children. Exhortations and even parental threats to punish did not help to appease them. Therefore, such lollipops were invented. It is inconvenient to shout or talk with a full mouth, so the “invention” made it possible to hold mass in silence, and made children even more friends with the church. Within a few years, the invention has become one of the traditions of Christmas. 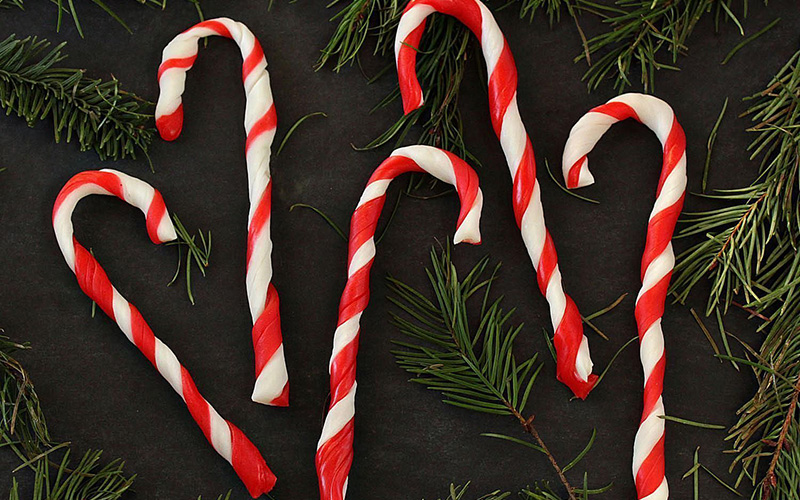 According to one version, the curved shape of the cane repeats the staffs of the shepherds who visited Mary after the birth of Christ. Another point of view is that the curved cane is the capital letter J in the name Jesus.

Wine with spices is enjoyed at Christmas festivities throughout Europe, but it is the stiff English that make this drink surprisingly sweet. Only they have sugar in the classic recipe, and in all other countries it is additional, and they are added to it at will. 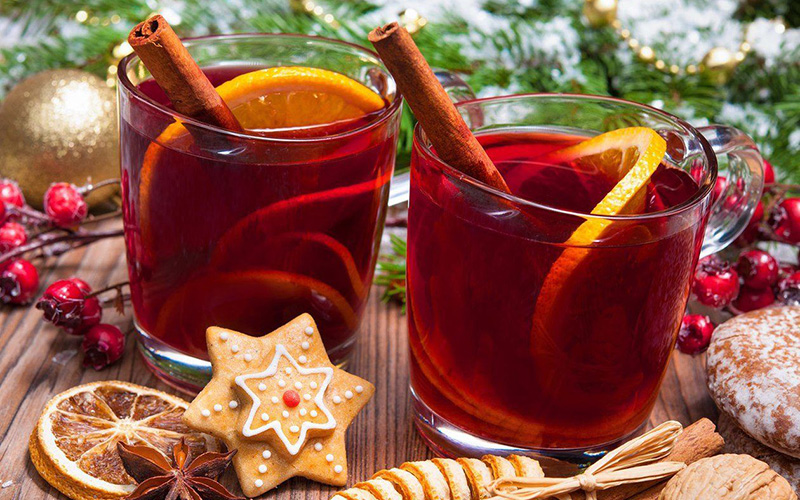 It is simply impossible to get to England for the Christmas holidays and not hear Christmas Carols. Initially, these songs were sung by the Druids, standing around round stones on the days of the solstice. Then this custom smoothly flowed into Christianity, becoming the anthem of charity. The current purpose of Christmas hymns has not changed, they are performed most often where donations are collected in the name of the born Christ. Surprisingly, the British still consider it shameful not to make donations when such a song is performed. 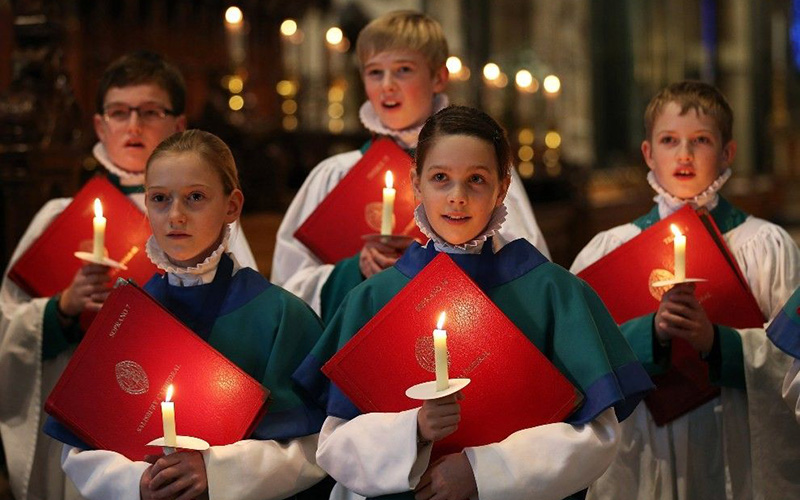 Under the accompaniment of these chants, they put ideas about the birth of the son of God. Beautiful performances with Christmas Carols can be seen in London in the middle of Trafalgar Square, and this tradition attracts a lot of tourists here.

The ratings of our presidents with their speeches on New Year’s Eve will never come close to the ratings of the speech of the Queen of Great Britain. The British love it very much, so the entire population of the country at 15-00 on December 25 watches TV or live on the Internet. This tradition began in 1932. The text for the reigning monarch was then created by Rudyard Kipling himself. And although members of the royal family did not dare to bring this idea to life for 10 years, it immediately became one of the most beloved by the British. Now without it it is impossible to imagine a real English Christmas. 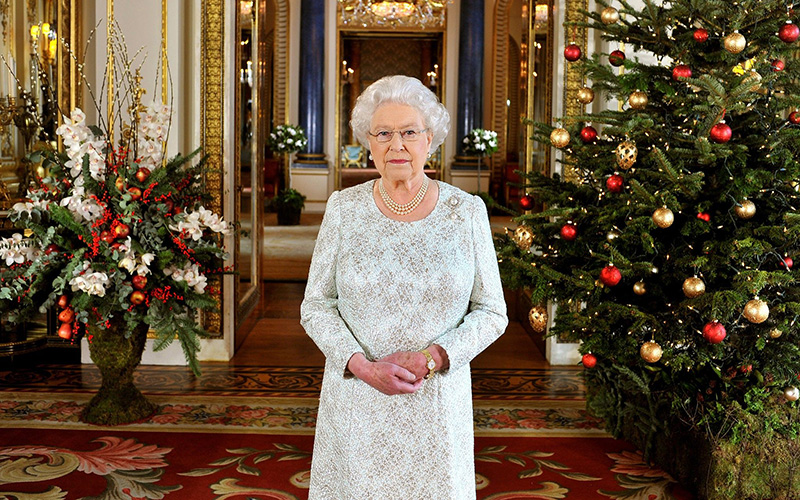 It is customary for us to celebrate New Year holidays in noisy companies, in restaurants and cafes, with friends, fly to warmer climes, etc. In England, a person who left home on the eve of Christmas will not be understood. The fact that the whole family should gather at the table that evening is an unspoken law. This is the most family holiday of the country, and it is attended by representatives of different generations. It passes with joint games, the most favorite of which is pantomime. 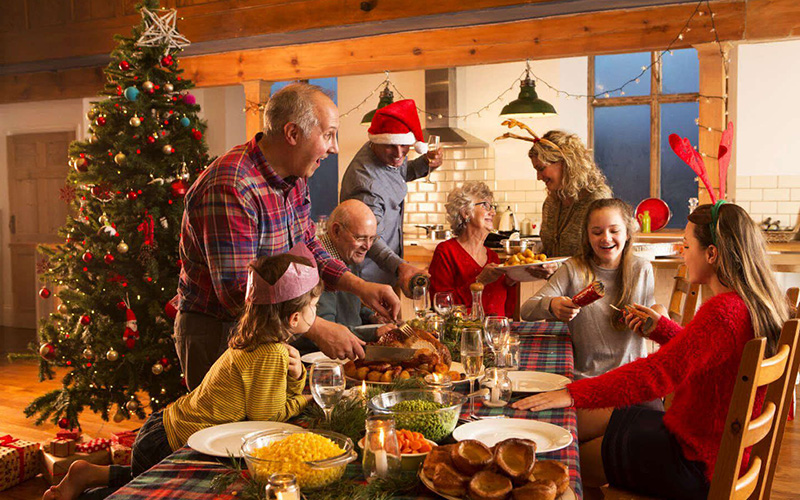 The British every year with trepidation wait for this day, dedicate it to rest and relatives. The beauty that envelops the central streets and remote corners is eager to see many tourists, but the British themselves do not go on trips very often at Christmas.