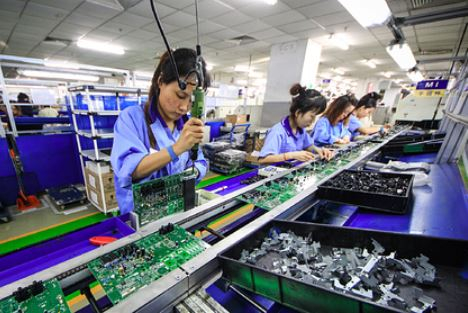 China will help the world tackle the chip shortage that has stalled the global economy. Semiconductor Manufacturing International Corporation (SMIC) has decided to invest $ 8.87 billion in the construction of a new plant in Shanghai, which will lead to a significant increase in manufacturing capacity in the country. Bloomberg writes about it.

The company signed an agreement to set up a semiconductor factory in Lin Gang, Shanghai’s free trade zone, where duties have been lifted. Such areas have been singled out in China to attract foreign investment and develop trade. The plant will be designed to produce 100 thousand 28-nanometer wafers per month. The company will register it as a $ 5.5 billion joint venture with the Shanghai government, in which the firm will own at least 51 percent. After the project went public, SMIC shares jumped 2.7 percent in Hong Kong and 4.8 percent in Shanghai.

The Shanghai plant is SMIC’s second major semiconductor material expansion project. The company plans to build a $ 2.35 billion factory in South China’s Shenzhen. It will produce up to 40 thousand 12-inch plates a month. SMIC aims to strengthen its leadership in chip manufacturing in China while increasing the country’s share of global semiconductor shipments. Now all of the company’s factories are already operating at full or almost full capacity.

The width of integrated circuits decreases every year with the advent of new technologies, but the demand for older, but reliable 28nm devices remains steadily high. This year the demand for such semiconductors has become a record – the world economy is experiencing an acute shortage of chips for the production of cars. Chips are needed to equip modern cars with sophisticated electronics that control entertainment systems, safety features and advanced driving aids.

During 2021, the auto industry is forced to cut production of cars due to the fact that chip manufacturers have reoriented themselves to the home appliance market, as the popularity of this group of products skyrocketed during the lockdown. The shortage forced Toyota Motor to cut car production in half, the largest Volkswagen plant switched to one work shift instead of three, and Volvo Cars completely stopped its plant in the Swedish city of Torsland. Even the electric car giant Tesla, which has temporarily stopped making cars in China, has been affected by the crisis.