Can we do without migrants?

Recently it became known that the ban on the expulsion of migrants from Russia was extended until December 30, migrant workers were given another opportunity to legalize in the country. What can the Russians expect from this decision?

For the first time, a moratorium on the deportation of migrants was introduced in April 2020 – exactly at the time when representatives of Asian states stormed airports in droves in the hope of flying home. Realizing that without cheap labor, the economy will collapse completely, officials have created almost all conditions for guest workers to remain in the country, even without an official job. Obtaining citizenship has become easier than ever. The authorities have canceled the requirement for applicants to renounce their existing citizenship. The order to grant citizenship only to those who have lived in the territory of the Russian Federation for three years has disappeared. Nobody asked to confirm the source of income. The Federation Council approved a draft on the right of foreigners to repeatedly apply for a patent without leaving Russia, as was previously required.

But the most important innovation was that foreign citizens were forbidden to be expelled from the country. The moratorium on deportation was in effect until October 1. Now the Ministry of Internal Affairs announced that it will be extended until the end of the year, but only for those who have legalized themselves by registering for migration. However, illegal immigrants will not suffer much. There is already a recommendation for police units to fine them, but not to send them to their historical homeland.

Representatives of enterprises and businesses vote with both hands to ensure that there are as many foreigners as possible. Anna Rybakova, general director of the Tver plant of reinforced concrete products and pipes, told reporters that she has been hiring guest workers from Central Asia for 10 years. Before the pandemic, there were no problems with migrants, but in 2020 the workers disappeared. “The local unemployed failed to fill the shortage of personnel – no one responded. As a result, the volume of production fell, the plant lost part of the market, as customers reoriented to other manufacturers, ”Rybakova complains.

Social activists working in the field of migration insist on legalizing all migrant workers without exception. “You can arrange raids, pick up people, but what to do with them when the borders are closed? In my opinion, this will lead to the spread of corruption: we will finally drive all these people into a corner and they will be forced to pay bribes to the police, ”says Vyacheslav Postavnin, ex-deputy head of the Federal Migration Service, president of the Migration – XXI Century Foundation.

MIGRANTS SET THE ORDER ON THEIR LAD

The fact that it is unacceptable to save the economy at the expense of the safety of the local population was already talked about at the highest levels. It is enough to look at the summary of incidents, as it becomes clear: the number of reports of mass fights with the participation of guests from the south has grown exponentially over the past year, and last summer they began to arrive almost every week.

On August 5, in Mytishchi, on Pogranichnaya Street, Chechens and Tajiks started a fight with shooting. In total, about 40 people were counted as violators. Local residents said that there were more Tajiks, but Chechens started shooting. Frightened townspeople called the police. When they arrived, there was no one at the scene of the fight. On the same night, the Tajiks and Uzbeks in Odintsovo did not share something. The migrants smashed construction shops and attacked each other with knives. Residents heard shots in the street.

On August 29, residents of Babaevskaya Street cut off the phones of the operational services all evening. A real massacre was taking place right under their windows – more than 100 guest workers were trying to sort out relations with each other. This place has been turbulent before. There is a large hostel inhabited by guests from Asia. Shouts, swearing, short skirmishes – the locals are already used to all this. But such a massive brawl happened here for the first time. When police cars arrived, the migrants scattered. More than 160 hooligans were detained during the search operations.

Friday 15 October A massive brawl took place in the Kuzminki metropolitan area. Against the background of all other incidents, it turned out to be small – only 10 migrants from Central Asia participated in the scuffle.

Recently, the Secretary of the Security Council of the Russian Federation Nikolai Patrushev said that “a large-scale influx of labor migrants to Russia can lead to an increase in crime, ethnic conflicts, contributes to an increase in tension among the indigenous population and the outbreak of mass riots.” In March, Patrushev has already raised the same topic. Then he said that the uncontrolled influx of migrants from abroad provokes “the activation of Islamic radicals and an increase in the number of their” sleeping “cells in the Urals.” The Secretary of the Security Council noted that more than 25% of 274 thousand foreign citizens are in the region with violations of migration legislation. In 2020, they committed over 2.5 thousand crimes. But soon after this statement, foreigners were again allowed to bring numerous relatives into Russia. It seems that no one listens to the opinion of the head of the Security Council.

TRAINS FOR MIGRANTS TO GO TO RUSSIA

Nikita Stasishin, Deputy Minister of Construction and Housing and Communal Services, said that the department plans to establish a mechanism for the import of foreign workers to Russian construction sites. “We will have a trip to Uzbekistan next week. We are planning to organize the selection, vaccination and everything related to labor migrants in a pilot mode. This will enable us to safely import migrant workers on trains in a centralized manner through the territory of Kazakhstan, ”Stasishin said at the Eastern Economic Forum. The delivery of guest workers is planned to be completed by the end of the year.

Deputy Prime Minister Marat Khusnullin is also in favor of large-scale import of migrants into the country. The concept “Aggressive Infrastructure Development”, which he presented to the government, directly states that Russia needs a “new migration policy” and needs “to open the borders for foreign builders.” The document proposes to increase the number of guest workers by 5 million by 2024. 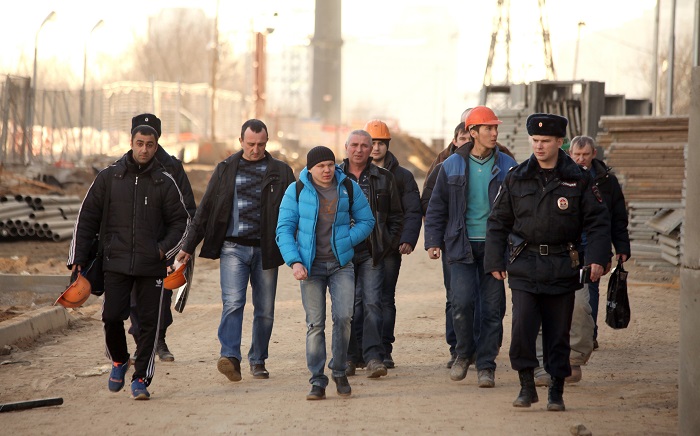 In a peculiar way, the migrants solved the registration problem in Tomsk. They bought 1 cm of housing from a 40-year-old resident of the village of Khromovka. Formally, the transaction was formalized as a donation, and everything happened quite legally: a man came to a notary in the company of another migrant and calmly made out a centimeter in his name. He simply could not give more to a new “friend” – the area of ​​the house was only 11 square meters. m, and there are more than a hundred people willing to buy property here. When the prosecutor’s office became interested in what was happening, it turned out that 125 people from Central Asia already owned the hut. It is not surprising that they lived elsewhere. In addition, the donated house was cut off from water supply, heating and all communications.

The investigators failed to prove that the previous owner made money on this. The man himself said that he gave shares in the house solely for good intentions. When the court ruled that the transactions were sham, the failed seller even tried to challenge this decision in a higher instance, but did not find support there.

Deputy Mayor of Moscow Andrei Bochkarev said that the capital’s authorities are now solving the problem of personnel shortages at construction sites. By raising the qualifications of workers, abandoning foreigners and increasing salaries, the mayor’s office expects to reduce the number of builders several times, but multiply their efficiency.