Buryatia is a country that is at the crossroads of European and Asian cultures. This left an imprint on the history and cultural heritage of the entire population of the republic. The traditions of the Buryat people are gradually leaving everyday life, as elsewhere, but they are still treated with respect here, especially in the outback. As a rule, the older generation still follows the customs and customs that the ancestors tremblingly and steadily adhered to. 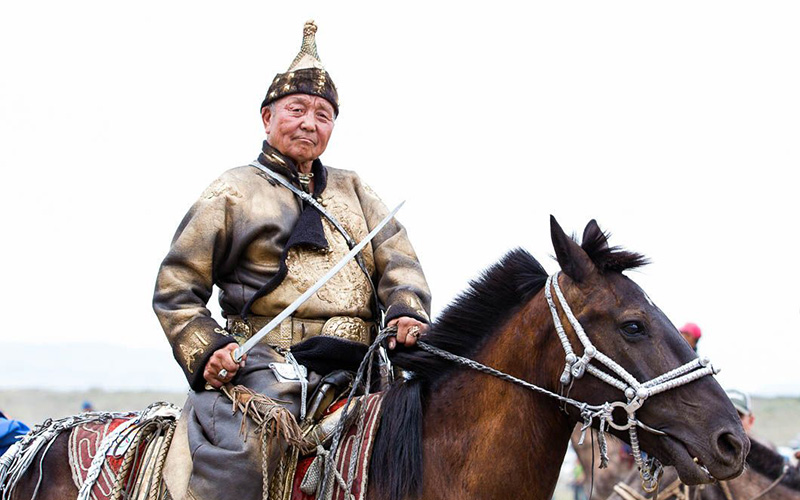 Back in the 18th century, the Buryats had the so-called tradition of “tukhalamzha”. Its essence was that within a group or tribe, everyone supported each other. Someone lived poorer, and someone richer, but the community did not allow the poorest to get into it. They all worked together, if someone had a problem, then there was no need to ask for help: everyone immediately thought of how he could help.

Together they worked in the fields, sheared flocks, stocked up for the winter, celebrated weddings and buried the dead. Since then, the Buryats have been a very friendly people, and this trait can be traced today too. This allows you to feel supported and not be alone in any situation.

Here they love meat very much, but without dairy products, even a full table will be considered empty. The number of dishes made from milk among this people is so huge that it is unlikely to be found in any other culture. Milk and all products made from it are considered sacred white food here. It is she who is offered to the deities during ritual ceremonies, and on a holiday such dishes are the first to be put on the table. 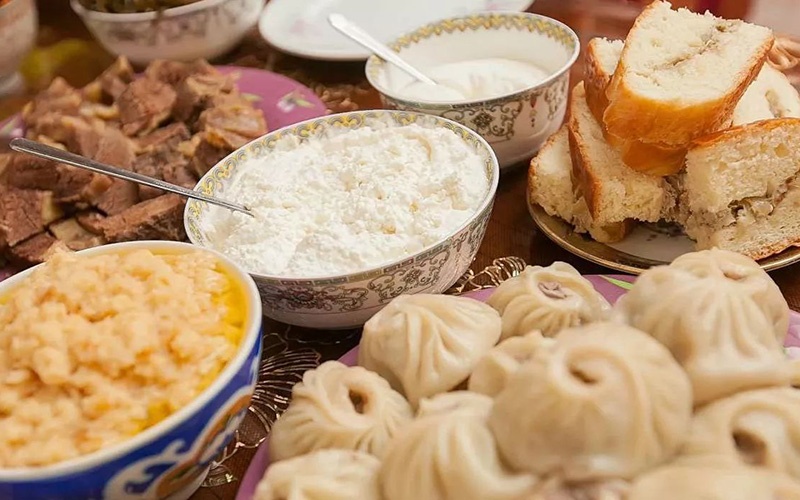 The Buryats have one interesting tradition that you need to learn before you come here. When a person enters the house, everyone carefully looks at how he will do it: step on the threshold or cross it. The fact is that the one who specifically steps on the threshold wishes the owners failure and hides evil intentions.

In front of the threshold outside the yurt, it was necessary to leave your weapons and luggage. So the person showed that he came with honest thoughts and completely trusts the people living here.

Usually in yurts, the entrance was equipped so that it was oriented to the south. This approach is preserved among the Buryats even now, especially in rural areas. The northern part of the dwelling is considered better, so guests are invited here, but without an invitation to enter this zone on their own is the height of bad manners. Another point related to the cardinal points: women can only be in the eastern part of the yurt, and men – only in the western half. That is, before visiting the dwellings of the Buryats, you need to repeat where which part of the world is located, so as not to blunder inside and not go where you should not. 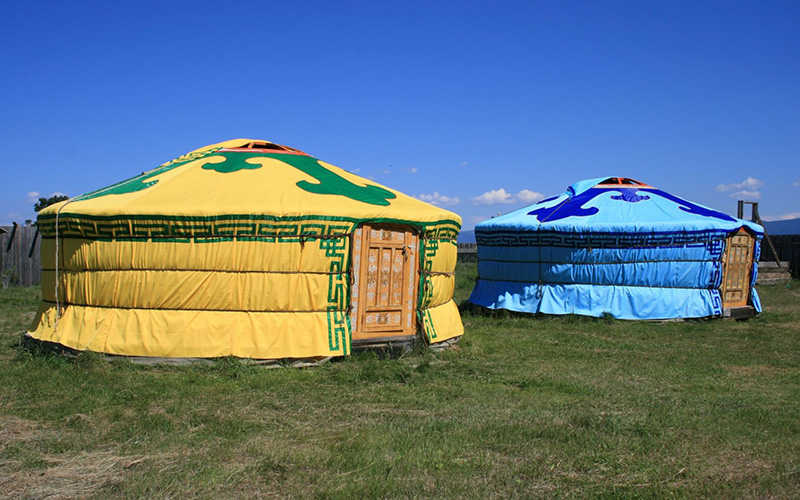 Like many Muslims, the Buryats have a very peculiar attitude towards the right and left hands. The left hand is considered dirtier, so only the right hand should be given during a greeting as a sign of respect. They also take all gifts, offerings, etc. with their right hand. If the person who is being greeted is especially valuable and loved, then they give him two hands at once, folded palms to each other, like Buddhists during bows. In this case, the return shake is performed with both hands. At the same time, when offering treats, the hostess holds the bowl with both hands as a sign of respect.

There is a tradition according to which the Buryats give gifts to the long-awaited guests in their house during the visit. It is impossible to refuse them so as not to offend the owners, even if it is some very valuable thing. An old Buryat proverb says: “Hands outstretched with a gift are not taken back with a gift.” Therefore, when planning to visit one of the Buryats, it is better to prepare something in advance in response.

Respect for the family

At any Buryat holiday there is a tradition at the feast to talk about family, ancestors. Each Buryat can list his line of kinship up to the 7th generation and will be surprised if you know little even about your great-grandfathers and great-grandmothers. Pedigree, as well as family relationships, is a special value for every family in Buryatia. 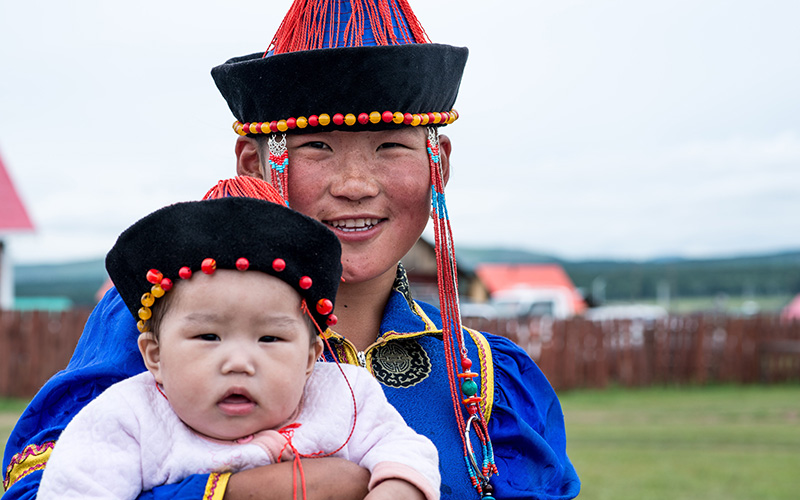 At a feast, they like to say toasts here, but here they are short, it is considered inappropriate to occupy people with raised glasses for a long time with their eloquence. By tradition, the first few toasts are made by the hosts, and only then the right of the toast passes to the guests.

Buryat traditions prescribe to drink and feed everyone who comes to the house. At the same time, it is impossible to rush and try to leave as soon as possible, since a guest in the house is a great joy. Also, be sure to try each dish, putting at least a little on your plate. All of them will be very tasty, as the Buryat cuisine is considered one of the most diverse and suitable for lovers of different food cultures.

The guest should not leave abruptly either. It is necessary to warn that it is time to return home in advance and several times.

Buryat funeral traditions are very different in different regions: those who lived in the Trans-Baikal Territory and in the territory of the Irkutsk Region had a different approach. It also changed over time.

In some tribes, cemeteries were built near groves and coffins were made, while in others they were not. At the burial place, the saddle of the beloved horse of the deceased was often left, and the horse itself was killed. Sometimes the corpse was not buried, but left to lie on the ground, making a mound of branches above it. Somewhere the dead were burned.

Special treatment was given to those who died from lightning strikes. It was believed that they were chosen by the gods. Wine and delicious dishes were placed next to their graves as sacrifices. In other groups, the deceased was laid as if he had just fallen asleep, the right palm was leaned against the ear and the legs were bent at the knees. 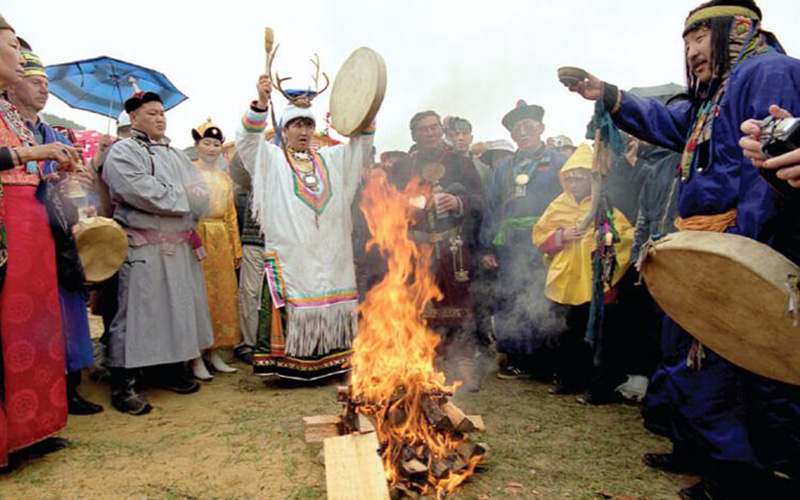 The graves were either not dug at all, or they were dug very shallow, but in the Baikal region, after the spread of Christianity, they began to bury, according to customs close to us, to a great depth and with a commemoration on the 40th day.

Such a great diversity in the Buryat burial traditions is due to the fact that the Western Buryats remained shamanists for a long time, and there were Buddhists in Transbaikalia.

The tradition of family games is still widespread here. Most of them consisted in reproducing the sounds of birds and animals, showing their behavior and habits. It was very useful for representatives of nomads and hunters to develop such abilities.

In addition, some games were used to get to know and make friends with neighboring settlements. On holidays, the Buryats had a tradition of playing Zemkhen, a game in which young people often split into pairs.

The family in Buryatia is considered the highest value. Very often a husband and wife live with their parents, grandparents. Previously, the Buryats allowed polygamy, but only if the husband could feed and provide for all the wives and all the children.

The female gender was surrounded by a mass of prohibitions and restrictions: the girl did not make any decisions, even those that directly related to her life, everything was decided for her by her father and brothers. After marriage, this role was taken over by the husband and father-in-law. After the death of her husband, the widow automatically became the wife of the younger brother of the first husband.

Even in the last century, girls and women could not participate in rituals, but now the female part no longer adheres so strictly to the strict orders of their ancestors. Education and the opportunity to work opened up for them in the second half of the 20th century. 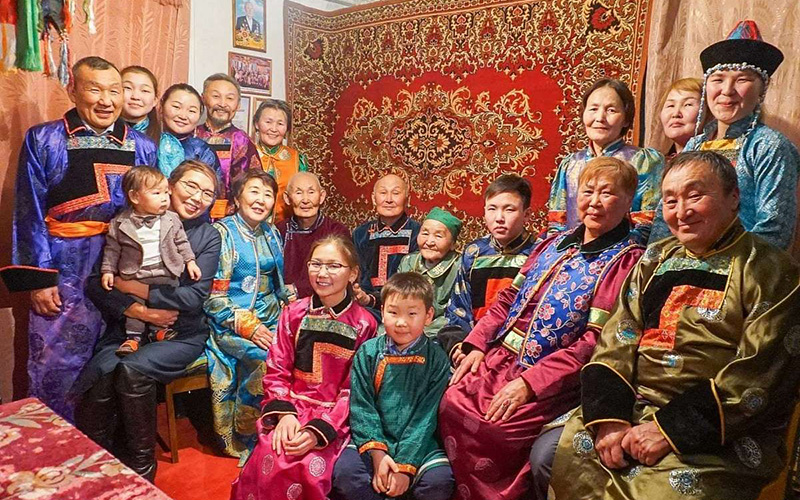 The childlessness of a couple was considered a punishment from heaven. For some Buryats, childless families aroused sympathy, for others, contempt. To remedy the situation, young people in such cases tried to adopt or adopt someone. It was not easy, since abandoned children among this people are a huge rarity. The kids were left alone only after the mother and father died together, and none of the relatives were left anymore.

The Buryats are big fans of holidays, but one is celebrated especially. This is the New Year or Sagaalgan in the Buryat language, which is associated with many traditions. Unlike the Slavs, who celebrate the beginning of the whole year for one day, here the rites lasted for 2 whole weeks. At that time, the white color ruled the ball: it was necessary to dress in white clothes, put white dishes on the table, use white curtains, white dishes, etc. in home decor. The name Sagaalgan itself is translated as “white month”. This is due to the fact that in the Buryat traditions this color marks nobility and purity.

The wedding customs and rituals of this people are very interesting. The fact that the children will get married, often their parents agreed even when the “newlyweds” themselves did not grow out of the cradle. This was celebrated at the table together with the matchmakers, while the parents exchanged gifts. Despite the fact that the contract was oral, it was no longer possible to choose another groom or another bride.

Tanks were concluded very early, the newlyweds were most often 14-15 years old. By this time, the girl’s parents were preparing a dowry, which she alone would then dispose of, and the groom’s parents – a ransom for the future wife – “baril”.

If a boy and a girl grew up in a family, then it was possible to significantly save on the ransom: for this, the bride and groom were found for their children in another family, and then they were simply exchanged. The wedding was celebrated very magnificently, with many guests, endless refreshments, contests, dances and songs. Interestingly, the guests gave gifts only to the bride. At the same time, her parents had to remember who and what gave, in order to give these people something similar for the holidays. 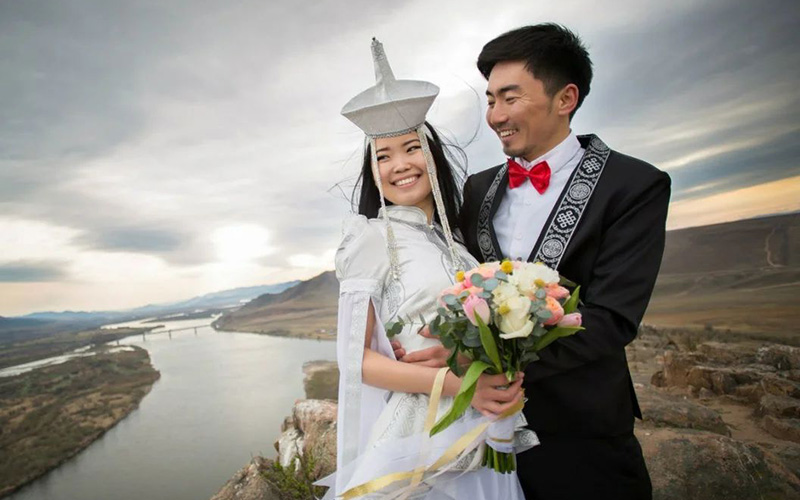 The appearance of a child

Pregnancy and childbirth were a difficult ordeal for young women, as the death rate during childbirth was very high. This was due to the fact that almost until the very birth, pregnant women were not freed from hard work, they were forced to lift heavy things. Just before the birth, the expectant mother was isolated from everyone, but not in order to protect her from risks, but because she was considered “unclean”.

After the baby appeared in the house, the right to name him was given to the oldest in the family. If the children of the spouses often died, then the names were chosen so that evil spirits would not covet them: “fool”, “hammer”, “wolf”, “crooked”, etc. The first months the child was hidden from prying eyes so that no one jinxed his.

The Buryats are an original people with original traditions, most of which are still preserved. They have slightly transformed in a modern manner, the role of women in the family and society has changed, but it is still interesting to recognize them.