During the era of Leonid Brezhnev (1964-1982), our country laughed at anecdotes and cried in stores where the shelves gaped with frightening voids.

This was the result of the fact that the country by the end of the 70s was ruled by the Areopagus of senile frail people.

Could this be in America? Not only can, but already there! With the arrival of Joe Biden in the White House, we are witnessing a clear “Brezhnev renaissance” in Washington.

ARE ALL AGES SUBMITTED TO POLITICS?

Of course, the age of the leader is an internal affair of every sovereign country. However, since the United States has taken on the role of the world gendarme, this state bears a special responsibility for the decisions taken and implemented in the international arena.

What would happen if at one time the Roman dictator-emperor fell three times, climbing the Capitol? Apparently, he would have been killed by the loyal Praetorian guard on the spot. And they just laughed at Biden, who was rolling like a tumbler on the ladder of the presidential plane before flying to Georgia. Like, well, what can you do – old man, coordination of movements is impaired, the head cooks badly … But all reasonable people understand perfectly well that all this is actually far from funny.

Joseph Biden is now 77 years old. Before becoming the 47th president of the United States last January, the peak of his career was the vice presidency (2009-2017) under Obama.

Leonid Brezhnev, when he died on November 10, 1982, was 76 years old, and he already had difficulty walking, talking and thinking. In recent years, assistants have worked for him. But who works today for Biden, whose condition also corresponds to the age and condition of Brezhnev in his last years? Vice President Kamala Harris, an overly tough, almost extremist woman? Isn’t this strange, if not worse, the situation for the United States and for world politics and economy? Or are we offered to consider that politics, like love, are of all ages and there is nothing to pay attention to the age of the head of state? ..

Nevertheless, it is quite obvious that it was precisely the old style of leadership and the state of health of Leonid Brezhnev that ultimately led to the fact that the country had to declare perestroika, including the ideological one. It is not necessary to tell what this led to – and ten years after the browstable general secretary did not pass, the USSR ceased to exist on the world map.

And what if a similar fate befalls the United States, which represents 40% of the world economy and the most powerful nuclear power? After all, this will drag the entire planet with it into the funnel of catastrophe!

Well, in order not to be unfounded, let’s compare the age-related eccentricities and painful manifestations of Secretary General Brezhnev and President Biden, people in power of about the same age. And we will try to understand what to expect next.

Leonid Ilyich got to the top due to tirelessness and efficiency. He fought, was wounded, could not rest for weeks and months, starting up some kind of plant, fulfilling a plan on virgin soil. This went on for decades. So stress, lack of sleep and continuous smoking severely undermined his health.

When in 1968 Brezhnev did not sleep for days due to the Prague Spring, he finally became addicted to sedatives and sleeping pills. And now, during the next meeting, the leader’s diction suddenly began to creep, the secretary general turned pale, weakness appeared in his legs. In the presence of other leaders of the USSR, he was forced to fall on the table, doctors came running and stated a hypertensive crisis. Prior to that, he had already suffered a heart attack in 1951.

On December 26, 1974, there was another crisis. On the train, Brezhnev had a cerebrovascular accident, he fell into a deranged state. But the secretary general was on his way to Vladivostok to negotiate with the then US President. Well, what kind of quality of leadership work can there be?

The leader of the USSR began arriving at the Kremlin very late, leaving home early. Most often, he was lying in the clinic or sitting in the country. He led, as a rule, by phone. From the regular meetings of the Politburo there were only 20 minutes of endorsements, when, without discussion, they raised their hands for the decisions already prepared by the apparatus. “Once an elderly and frail general secretary passed out at a meeting, lost the thread of the conversation,” an eyewitness recalled.

The whole country, including on TV during the broadcast of the congresses of the CPSU, saw: Brezhnev mumbles, confuses, makes mistakes. People were ashamed of the head of state, it was not only his personal tragedy, but also the tragedy of the whole country.

“There is also a historical pattern,” comments political scientist Pyotr Krasilnikov. – When the leaders of the state do not retire in time, they, as a rule, justify all this ideologically. In Brezhnev’s case, it was a struggle for peace and the building of communism. But when the aged leaders serve “the only correct and ruling ideology” – expect insanity in everything as a result. In the 70s and 80s, all around was: “Glory to the CPSU!”, “The economy must be economical!”, “Forward to the victory of communism!” … It was a lie, and the lie ruined the state. “

JOE BAIDEN: ON THE SAME RAKE

The current American president-gerontocrat repeats Brezhnev’s path. He, too, with his party serves and actively implements the newfangled ideology. Only this is not Marxism-Leninism, but the ideology of New Leftists – encouraging the influx of migrants, sexual minorities, when transgender people become ministers, when historical, racial claims like the BLM movement are heating up in the country. But the essence is the same: where the “only correct teaching” is being introduced, wait on the throne of the senile.

Today the whole world is amused and frightened by Biden’s frequent mistakes and blunders. For example, the famous scandal when, speaking in front of voters, an American leader confused his wife and sister. He remembered for a long time which of them was who. And when his wife waved her hand negatively, the old man realized that he called his 69-year-old wife Jill a sister. He has been married to her for 45 years, and to forget who she is, you have to be in dementia. Biden distinguished himself by the fact that his granddaughter Finnegan, the daughter of Hunter’s youngest son, was publicly named after another granddaughter, Natalie.

About Biden, as well as about Brezhnev, jokes began to circulate: “One old man asks another:” Colleague, what do you think is better: sclerosis or insanity? ” – “Sclerosis is unambiguous. If you have certain problems with sclerosis, you simply forget about your own insanity. “

The buzz was caused by Biden’s recent speech at the Pentagon headquarters. Here is a quote: “I also want to thank s… the former general. I continue to call him General, but this is mine … Well, the guy who is at the head of that department. “

The US President succeeded in the impossible: forget the name of the Secretary of War and who he is. How will Biden contact him, for example, in the event of an attack on his country? At the same time, the head of state immediately forgot the name of the Pentagon, in the building of which he was then.

A whole bunch of reservations and blunders have accumulated, and Trump knowingly sarcastically that his rival suffers from dementia. Still, Mr. Biden called Trump himself George. Then, instead of 200 thousand deaths from coronavirus, he suddenly reported 200 million, that is, he buried two-thirds of the US population at once. And Biden dumbfounded the public by claiming that he had entered the Senate 180 years ago.

Experts say that today in the United States, as in the time of the late Brezhnev, all decisions are made on a collegial basis by Biden’s entourage, as well as Kamala Harris. And how else to run a huge state, if its president himself called himself “the machine of oversights.”

How will this end for the United States and the world? As if not in the same way as the rule of the Brezhnev gerontocracy for the USSR – decline and disintegration. 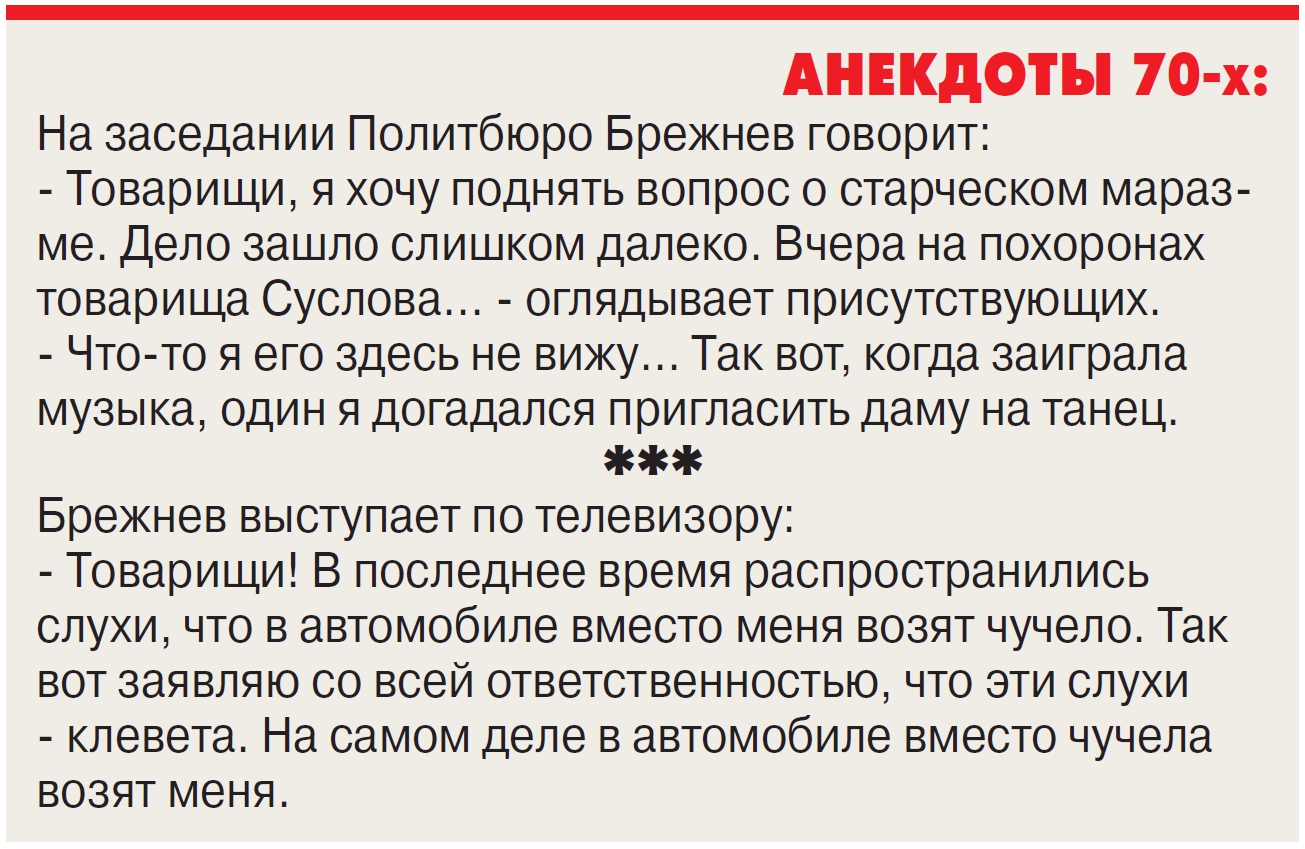