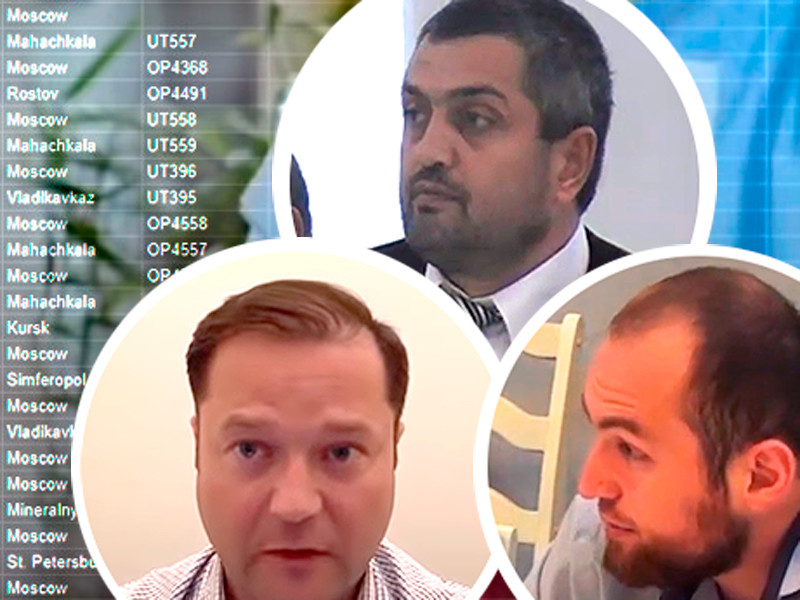 Bellingcat investigation team and publication Insider published an investigation into the murders of journalist Timur Kuashev, activist Ruslan Magomedragimov and leader of the New Russia movement Nikita Isaev. The authors of the publication suspect that FSB officers were involved in these crimes, who allegedly used chemical weapons of the Novichok family to poison the opposition politician Alexei Navalny.

The body of Timur Kuashev, a 26-year-old journalist and human rights activist from Nalchik, was found on August 1, 2014 with bruises and a trace of a syringe under his arm. Presumably, the killers wrapped a rag dipped in chloroform around his mouth and nose to render him unconscious. This is evidenced by abrasions on the upper part of the face, which look like hand marks.

The official cause of death of the journalist was called acute coronary insufficiency. On the day of the murder, there were “Navalny’s poisoners” Konstantin Kudryavtsev, a doctor from NII-2 FSB Ivan Osipov, and two more officers, Denis Machikin and Roman Matyushin, in Nalchik.

Machikin and Matyushin, according to the findings of the authors of the investigation, are employees of the Second Service of the FSB, which is called the “Service for the Protection of the Constitutional System.” Since 2006, the Second Service has been headed by a native of St. Petersburg, General of the Army Alexei Sedov. According to the Dossier Center, Sedov is the henchman of billionaire Roman Rotenberg, ex-mayor of St. Petersburg Georgy Poltavchenko and “presidential masseur” Konstantin Goloshchapov. It is the Second Service that is involved in the persecution of political activists in Russia, and also investigates the crimes of bandits and extremists (for example, the activities of the Jaco gang and the neo-Nazi group BORN).

When the father of the journalist Khambi Kuashev (who became a distinguished investigator in the Soviet years) tried to find out what happened to his son, he found many oddities. So, for example, all cameras at the place of travel from Kuashev’s house to the place where his body was found in the forest near the road (and there were at least four cameras there) were turned off due to “failure of the switch”.

Kuashev’s father also told The Insider that Timur’s keys were missing (they were not found at the scene of the murder). The father believes that the killers then entered the house, because Timur had a flash drive, usually stuck into a computer, and it disappeared. The father also insisted on conducting an examination to check the version of the poisoning. Samples of Kuashev’s blood were sent to Moscow, where the killers from the FSB NII-2 themselves tested it. Of course, they found nothing suspicious. The examination was signed by the same Vasily Kalashnikov whom Kudryavtsev mentioned in a conversation with Navalny (Kalashnikov is the only known member of the group of poisoners who was in Omsk, and as an expert in the field of gas chromatography / mass spectrometry, it was he who most likely should have made a conclusion about whether it is still possible to detect “Novice” in the blood).

Detailing by Kuashev’s number shows that all calls and SMS up to August 2 have been cleared: there is no mother’s call, nor even those SMS dated July 31, which are mentioned in the case file.

The journalist Maksim Shevchenko, who knew Timur Kuashev and his father, carefully studied the circumstances of this death and believes that the reason for the poisoning was Timur Kuashev’s coverage of the trial of an armed mutiny in Nalchik in 2005. However, Kuashev constantly received threats – he was one of the few independent journalists in the region, local authorities and security forces constantly put pressure on him.

An activist of the public regional movement “Unity” (“Sadval”) Ruslan Magomedragimov was found dead on March 24, 2015 in Kaspiysk, Dagestan. According to the official version, he died of suffocation, although no traces of violence were found. The activist’s relatives said that two marks were found on his neck, similar to the marks from injections. In addition, in the car of Magomedragimov, in which he traveled before his death, as part of a pre-investigation check, a trace of the shoes of an unknown person was found. The car itself was found 400 meters from the place where Magomedragimov’s body was found.

As an activist of the public regional organization “Sadval”, Magomedragimov defended the rights of the Lezghin people, and also advocated the idea of ​​reuniting the Lezghins of Russia and Azerbaijan through the creation of the autonomy “Lezgistan”. Despite the fact that the activities of the organization were harmless, it could be viewed by the FSB as hostile, since the special service often reacts very aggressively to organizations promoting the idea of ​​”national autonomy” in different regions of Russia, The Insider notes.

Exactly a year after the poisoning of Magomedragimov, on March 20, 2016, in Makhachkala, the chairman of Sadval Nazim Hajiyev was found dead in his apartment. According to official figures, he died from multiple stab wounds. During those days no one from the group of poisoners was in the city.

Poisoning on the train

Nikita Isaev, leader of the New Russia patriotic movement, died on the Tambov-Moscow train on November 16, 2019. His companion said that he suddenly felt bad. Isaev, before his death, assumed that he had been poisoned. Shortly before his trip to Tambov, the head of the Fair Russia party, Sergei Mironov, appointed him as an advisor for regional development. Isaev’s task in the city was to select candidates for the party and prepare them for the elections.

Bellingcat suggests FSB officers began spying on Isaev in December 2018. The journalists found seven matches in the city and travel dates of Isaev and the officers. Alexei Alexandrov and Ivan Osipov, who were involved in the assassination attempt on Navalny, allegedly participated in the operation to poison him. Both “poisoners” have medical degrees. Comparing data from the flight database with Isaev’s well-known trips, which he wrote about on social networks, the authors of the investigation found 7 matches in the city and date of the trip (not counting his last visit to Tambov), and, most likely, there were more intersections, given the incompleteness of the base flights available at Bellingcat’s disposal.

FSB officers Alexander Samofal, Viktor Kravchenko and Mikhail Tikhonov also participated in the alleged poisoning of Isaev, writes The Insider. The authors of the investigation, studying the air travel databases, could not find traces of the presence of the said FSB officers in Tambov at the time of Isaev’s poisoning. This means that they either used different names, or “cleaned” the information from the base, or used a car (from Moscow to Tambov about 5 hours drive). However, according to the phone metadata of one of the five “poisoners”, it was possible to find out that he really was in Tambov on November 1, 2019. Bellingcat will not disclose the man’s name to avoid jeopardizing its source.

Isaev’s acquaintances and relatives do not hide the fact that he had close contacts with the Presidential Administration since Vladislav Surkov’s work there and was an absolutely loyal politician to the Kremlin. He collaborated, for example, with Vasily Yakemenko (the ex-head of Rosmolodezh, the former leader of the pro-Kremlin movements Nashi and Walking Together), and recently he also actively communicated with Alexander Malkevich (the right hand of “Putin’s chef” Yevgeny Prigozhin). Isaev often spoke on state channels, criticized Navalny, although he considered himself an opposition, and built his political activities on the struggle for the environment in the regions.

In 2019, Isaev had a good career in the A Just Russia party, deputy Oleg Shein introduced him to Sergei Mironov, they agreed on cooperation, and if everything went according to plan, in 2021 Isaev would have been nominated to the State Duma from SR.

What Isaev did not please the FSB, one can only guess. But since June 2019, he was clearly afraid of something. Relatives and friends of the politician recall that he even discussed the possibility of taking his family abroad.

Presumably, Nikita Isaev worked not only for the Presidential Administration, but also for the Russian special services, for example, the SVR: his frequent trips abroad, including as an “employee of an insurance company” and “export specialist”, could be an ideal cover for such work. In addition, the fact that he quickly found an understanding with Sergei Mironov speaks in favor of this hypothesis (among Mironov’s closest aides there are two SVR officers). In this case, something in Isayev’s actions could have been interpreted by the special services as a betrayal, The Insider believes.

His assistant Alina Zhestovskaya, who accompanied him on the train, could have participated in the operation to eliminate the politician. The girl also claimed to have become his lover.

Not long before his death, Isaev began to suspect that Alina Zhestovskaya was “assigned to him,” and was going to get rid of her. Zhestovskaya met Isaev on the train, began working with him free of charge, and soon replaced part of his team for him, taking over his responsibilities, including controlling his schedule.

After the death of Isaev, his body was cremated without waiting for the results of the examination (according to the former wife, this was the will of the deceased). Zhestovskaya subsequently began to assert that Isaev died of a heart attack, and everyone who talks about Isaev’s poisoning (or Navalny’s poisoning) is simply promoting.

The authors of the investigation described in detail only those victims, whose movements and locations have repeatedly coincided with the movements of the “poisoners from the FSB.” But there are other murders as well. For example, in 2013, the leader of the Chechen separatists, Doku Umarov, died. According to sources of the “Caucasian Knot”, he was poisoned with a potent poison as a result of a special operation by the FSB. It is known that two of Navalny’s “poisoners” – Vladimir Panyaev and Aleksey Aleksandrov – went to the south of Russia at the end of August (Panyaev – to Makhachkala, Aleksandrov – to Krasnodar). But it could have been a coincidence, the authors of the investigation admit.

In December, The Insider, CNN, Der Spiegel and Bellingcat published an investigation into the poisoning of Alexei Navalny. They gave the names of eight FSB officers who had traveled for Navalny throughout Russia for three years. This surveillance of the politician began after in December 2017 he announced his intention to run for president of the Russian Federation.

Some members of the “poisoner gang” have medical and chemical education. Later, the author of the investigation, Hristo Grozev, published data on the movement of security officials over the past 16 years and said that he was investigating the FSB operation in the North Caucasus, as well as the poisoning of politician Vladimir Kara-Murza Jr. in 2017.