Baza: 22-year-old daughter of Shuvalov, ballerina of the Bolshoi Theater, received over 2 billion rubles in 2018 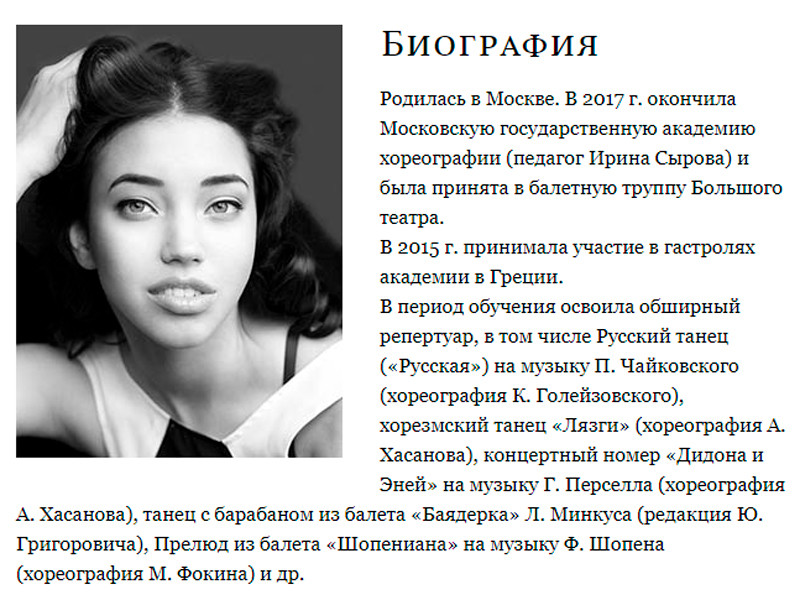 The income of the 22-year-old daughter of the former First Deputy Prime Minister of Russia, now the head of the Russian state development corporation VEB.RF Igor Shuvalov, Maria Shuvalova, in 2018 at KSP Capital Asset Management amounted to 2,062,326,565 rubles (about 22,532 815 euros). This was reported by the Internet project Baza, citing a source with access to the databases of the Federal Tax Service.

And Igor Shuvalov himself in 2018 officially earned only 71 million rubles.

Maria Shuvalova is a ballerina. In 2017 she graduated from the Moscow State Academy of Choreography and was admitted to the Bolshoi Ballet Company. According to Baza, Shuvalova’s earnings in the theater in 2018 were 851,000 rubles (about 9,286 euros).

At the same time, according to the authors of the investigation, the net profit of KSP Capital Asset Management for 2018 amounted to 63 million rubles (about 687 366 thousand euros) – “that is, 33 times less than the salary of her employee Maria Shuvalova.” “Baza” does not say what position the daughter of the head of “VEB.RF” could have held in “KSP”.

Meanwhile, the press service of the company, responding to a request from the publication, notes: “Maria Shuvalova does not hold and has never held any position in KSP Capital Asset Management and, as a result, has never received any salary there. “.

“Neither KSP Capital Asset Management” nor its sole beneficiary Sergei Kotlyarenko are and have never been “nominal owners” of any property of their clients, including the family of Igor Shuvalov, “they add. Maria Shuvalova herself has not yet commented on the publication.

Igor Shuvalov in 1997 was appointed head of the Department of the State Register of Federal Property of the State Committee for Property Management. In 2000, he took over as chief of staff of the government, and four years later became an assistant to the president. From 2008 to 2018, Shuvalov served as First Deputy Prime Minister. Since May 2018, he has been the head of the state development corporation VEB.RF.

As the deputy general director of Transparency International – Russia, Ilya Shumanov, said in an interview with Baza, it is difficult to imagine what competencies a girl should have in order for her to receive an income of two billion rubles. And given that the relationship between Kotlyarenko and Shuvalov has long been reported, it all looks like withdrawing money from the company. “

“It would be logical to assume that this method was chosen to make the Shuvalov family look better in the eyes of foreign regulatory authorities. For example, in the UK, where, as you know, the Shuvalovs have real estate, there is now a so-called Unexplained wealth order – an extrajudicial mechanism. allowing the confiscation of property from a person who cannot explain the origin of his huge income, “Shumanov recalled.

Earlier, Russian and foreign media reported that the former Deputy Prime Minister of the Russian Federation purchased spacious apartments in Whitehall Court, a luxurious Victorian mansion located within walking distance of Trafalgar Square and the Prime Minister’s residence on Downing Street. The value of this property is estimated at at least £ 11.5 million.

When the Unexplained wealth order began to be applied by the UK authorities, Transparency International UK drew their attention to five properties whose foreign owners should be verified. The honorable second place in this list was taken by Shuvalov’s apartment.

The family of the head of VEB.RF has not only an apartment in London, but also a castle in Austria, a villa in Dubai, numerous real estate in Russia, as well as its own plane, Baza reports.

In Russia, the value of his property turned out to be much more modest, not because it was cheaper, but because its real value was understated. For example, the cadastral value of the huge (7.6 hectares) Shuvalov estate in the Moscow region was estimated at only 107.5 thousand rubles, that is, its value was underestimated by 2800 times. True, after the publication of these materials in the media, the cadastral value of real estate was recalculated and approached the adequate – 297 million rubles.

Recall that the 2004 law on the Russian civil service prohibits officials from “engaging in entrepreneurial activities personally or through proxies.”