The culture and traditions of the Bashkir people have a long history. The first mention of people who settled in a large area at the foot of the Urals and on the banks of the Volga date back to the 9th century. The freedom-loving and brave Bashkirs have endured many difficulties, but throughout their history they have never been under the yoke of any state, although they lived as part of Hungary and the empire of Genghis Khan. They always occupied a privileged position and showed respect to other nationalities, accepting strangers on their territory with an open heart. 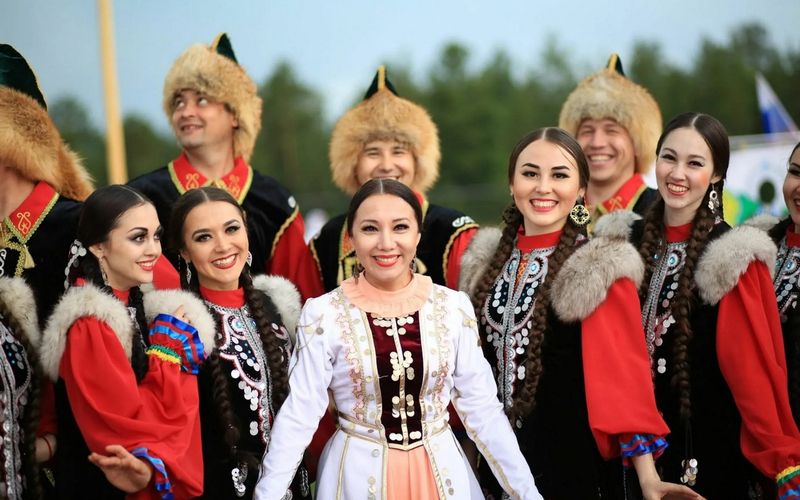 This people has its own Bashkir language. It has been formed over the centuries and is a symbiosis of the Kypchak, Tatar, Bulgar, Arabic, Persian and Russian languages. Philologists distinguish several dialects within it: Kuvank, Burzyan, Yurmatinsky. They differ from each other phonetically, while being understandable to all the peoples of Bashkortostan and even the Tatars.

The language that the Bashkirs speak today was finally formed only at the beginning of the 20th century. The basis of the vocabulary is the words of ancient Turkic origin. The semantic function is played by stress and affixes, but prepositions, prefixes and generic forms are not used in this language. They write in Bashkiria in Cyrillic with 9 additional letters to designate specific sounds, although 70 years ago the Volga Central Asian script was in use. 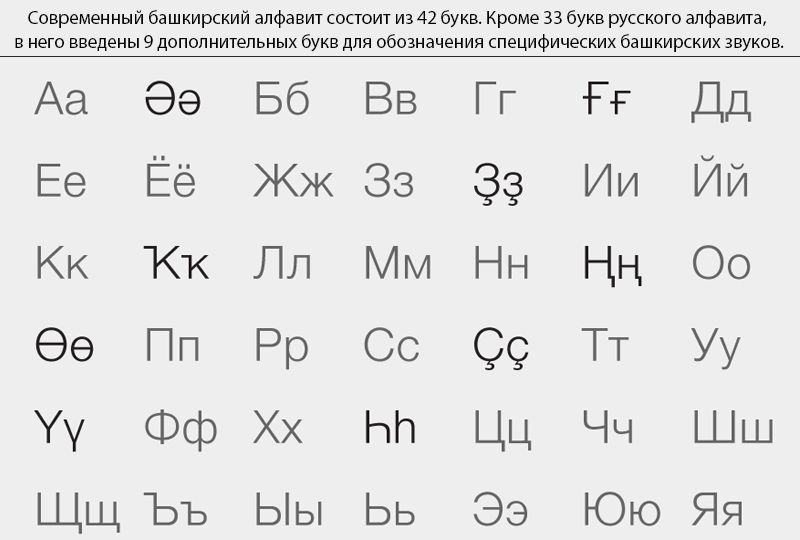 The formation of family traditions of the peoples of Bashkiria was influenced by two religions: Christianity and Islam. Until the 19th century, a small family was a priority, when the young after the wedding went to live in a separate house. Cases when sons brought girls into their family were rare, and this was due to the extreme need to conduct common affairs, as they say today, business.

From the Orthodox foundations, the Bashkirs developed a tradition of a monogamous family, but bigamy was not completely denied. In the past, polygamy was characteristic of beys and members of the clergy. Rich men could also marry a second time, but only if the first wife was sick or could not have children. For widowers, the father of the deceased was looking for a new spouse, provided that the dowry was paid in full for her. If a woman remained a widow, then she could marry a relative of the deceased spouse.

By tradition, the Bashkirs of the Urals have a patriarchy. The father is considered the head of the family. His word determines not only financial and property expenses, but also the fate of children. The rights of women in Bashkir families vary depending on age. The mother is always held in high esteem, she is responsible for all household chores and has the right to vote in relation to the future of the children on an equal basis with the father. If several generations live in the same house, then the hardships of the household always fall on the shoulders of the daughter-in-law: she cleans, does laundry, cooks for the whole large family, and also takes care of the livestock. 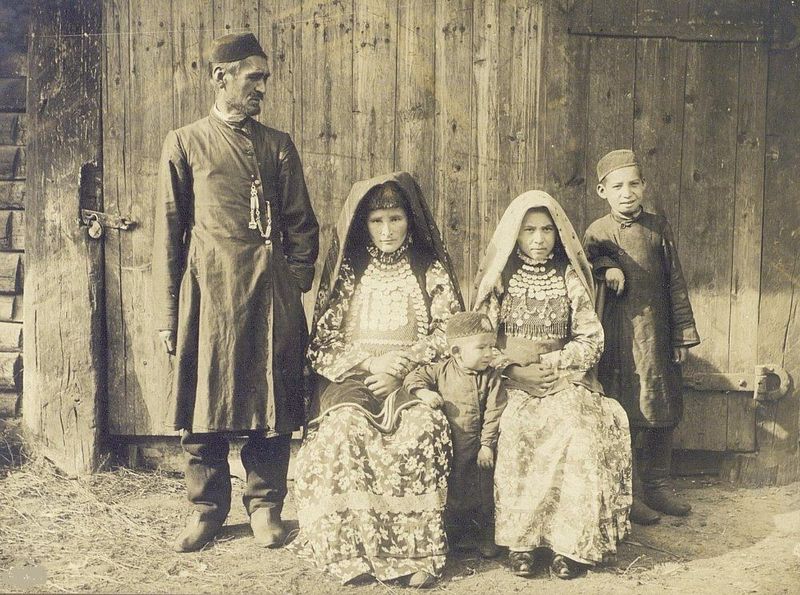 The Bashkirs value their traditions very much, and that is why the percentage of divorces, in comparison with other regions, is at a low level. Previously, in order to break off relations with a spouse, a woman had to prove that she was being mistreated. This was an extreme step, since after a divorce, remarriage was prohibited.

According to tradition, the Bashkir wedding is a rite that has remained unchanged for many centuries and is subject to Sharia law. Even today, the bride and groom are looked after by their parents, but unlike the harsh realities of the past, the sympathy of the young for each other remains a priority. The boy’s father wooed the girl. He had to get the consent of not only the bride’s parents, but also her, otherwise the wedding was not agreed. The ceremony of courtship among the Bashkirs ended with the parents drinking koumiss and honey from one container. After that, it was impossible to terminate the engagement. 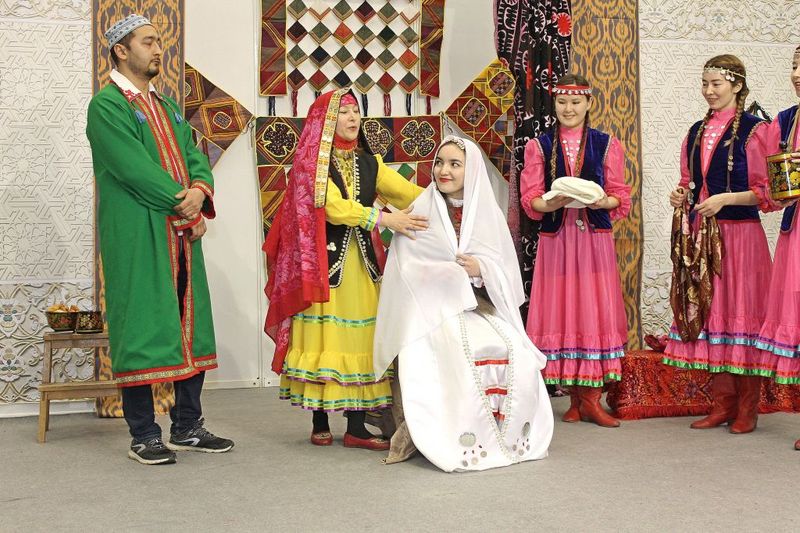 According to folk tradition, the Bashkirs have a rule for paying kalym for a young woman. Its size is determined by the financial situation of both families and is negotiated immediately after the matchmaking. Usually the kalym was:

Nowadays, from the entire list, the tradition of giving alcohol, several boxes of vodka for the bride has been preserved. This is received by the girl’s relatives, but she herself is entitled to the mahr from the groom. According to the national tradition, among the Bashkirs, these are gold and silver jewelry (rings, earrings), which, from the moment they receive the gift, are considered exclusively the property of the girl, and not part of the family capital.

Immediately before a secular wedding, according to Sharia law, the Nikah rite is performed. He goes to the girl’s side. At this time, guests gather in the house, two witnesses and one guardian from the bride and the groom’s parents are always present at the ceremony. Mullah reads a prayer, which, in fact, is permission to marry.

These days, Nikah is rarely performed, usually it comes down to a traditional secular wedding. But many interesting traditions are connected with this custom among the Bashkir people. For example, the ritual “yyrtysh”, in which the young daughter-in-law plays the main role. In the evening after Nikah, a feast is held, during which the bride runs away from her husband and hides in her brother’s house. The groom must find her, otherwise he cannot claim the wedding night. The rite is comic, but at the same time very symbolic. When a man finds “loss”, he is obliged to give a ransom to his daughters-in-law in the form of beautiful scarves. In response, they give him a red cloth, which the groom tears with his foot, which symbolizes the receipt of the right to deprive his betrothed of virginity. 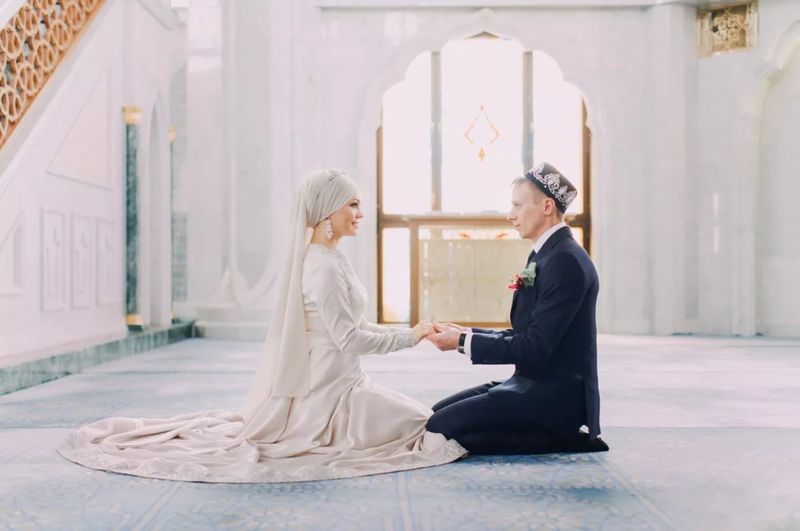 Another comic custom is to heat a bathhouse for young people. The daughters-in-law also do this, adding as much heat as possible. In response, the groom leaves them a gift: he puts money in a towel and ties it in a tight knot as a symbol of male power.

The wedding itself, or the rite of Tui, was celebrated after the full payment of the bride price. They walked her for three days: the first in the bride’s house, the second at the groom’s, and on the third day the girl went to a new house.

The most famous national holiday of the Bashkir people is Sabantuy, the traditions of which have evolved over many centuries. In the original, the name sounds like “habantuy” and means “haban” – a plow and “tui” – a holiday. It is celebrated at the end of sowing for a whole month from the end of May to the end of June. In the culture of the Bashkirs, the traditions of the holiday are of great importance: many people gather for Sabantuy, showing their unity among themselves. Initially, it was celebrated to appease the spirits that patronized a good future harvest. 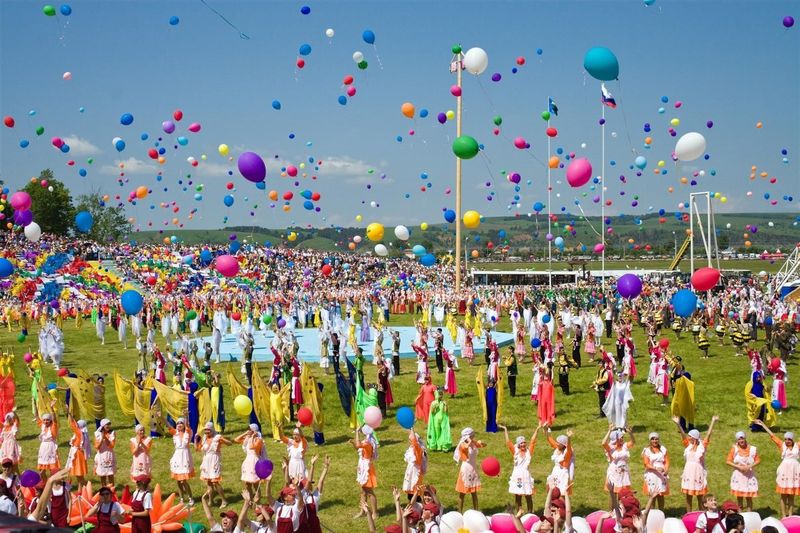 During the holiday, various games and contests are organized, in which men take part. The most popular: horse racing, sash wrestling, running of various kinds, climbing a pole, wrestling with bags of hay on a log. There are also creative tasks for singers, competitions for athletes, among which wrestling is held in high esteem. The winner of the competitions receives a valuable prize, previously it was the carcass of a whole ram. While the men are showing their talents, the women in yurts (tents) set up next to each other are preparing dinner in cauldrons.

The Bashkir people are very hospitable and responsive. This is especially felt in the villages. As soon as the hostess throws a cry for help, her neighbors immediately reach out to her. The tradition of Kaz Umahe, or Goose Help, is interesting. This is a general preparation for any holiday. The owner of one house slaughters geese, after which the women sit down to pluck them together. Such an ordinary occupation was transformed into a whole custom that precedes matchmaking. The thing is that when the older housewives coped with their work, the girls took the bird and went to wash it on the river. There they were waiting for the guys who sang songs and played the accordion. Back, already young people returned home together for goose noodle soup and games of forfeits. 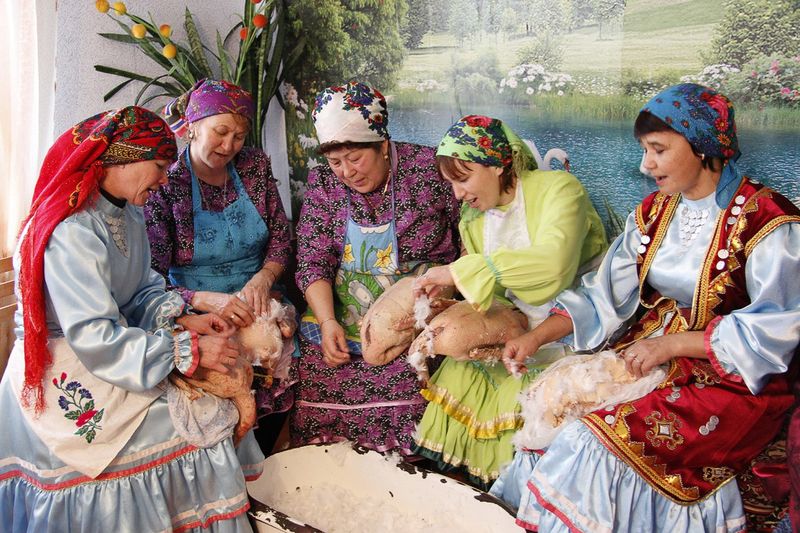 Refusing to help someone is considered a great sin for the Bashkir. In the old days it was an honor to host a traveler and give him food. People believed that the more the guest ate, the more successful their life would be. For example, the invitee was sure to be given milk to drink so that the cow’s milk yield was good.

The Bashkir people in the past led a nomadic lifestyle, so the basis of the national cuisine is thick and hearty dishes with lots of meat. Of spices, red and black pepper are used in cooking, other herbs and spices are not held in high esteem. They eat mostly horse meat. A traditional treat is meat with a large piece of fat, in addition to broth and koumiss. 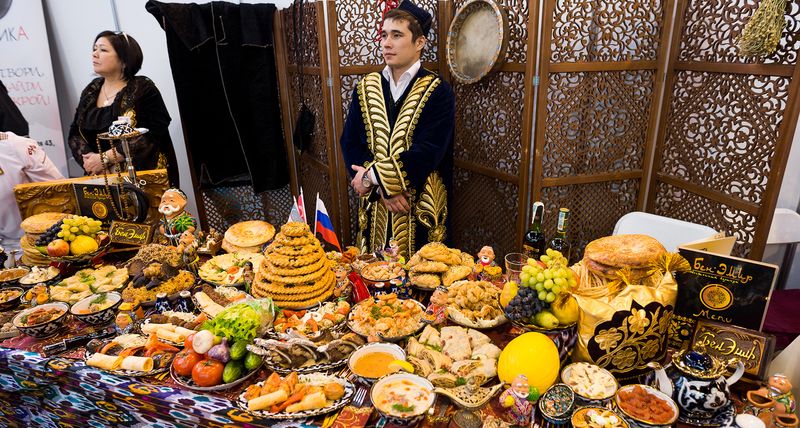 The nomadic lifestyle led to the appearance in the diet of the Bashkirs of long-term storage products: dried and dried meat, dried fruits, honey, sour-milk drinks. The most popular dish is beshbarmak – a soup with large pieces of meat and large noodles. As an example of the gastronomic traditions of this people, guests are also served goose meat soup with noodles, meat and potato pies, stuffed chicken.

One of the interesting customs of the Bashkirs is the tradition of tea drinking. Usually many guests are invited, who are served fragrant herbal tea, and to it – sausage, yuuas (flat cakes fried in oil), cheesecakes with honey and sour cream. For unprepared people, such a tea party is akin to a real dinner.

The Bashkir people have many forbidden topics. They are due to both religious views and the historical past. Some of them seem unimportant today, but all are still respected: 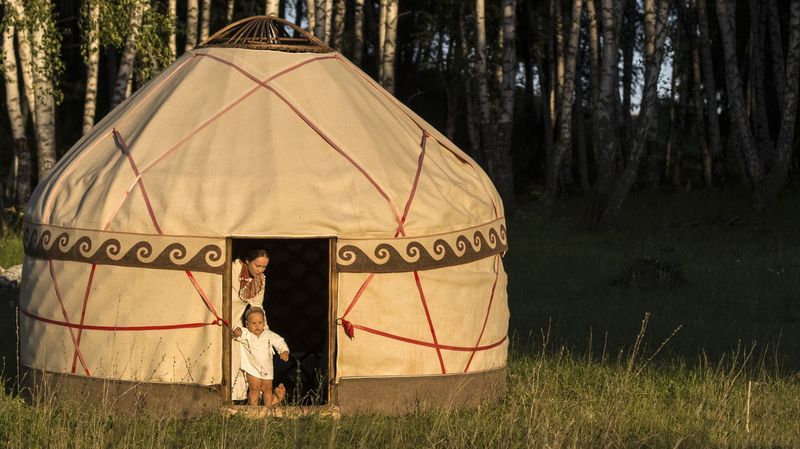 The traditions of the Bashkir people are mainly based on maintaining family values. They are an example of how people should live in unity with each other and not forget about nature.