Baptism of a child: traditions and customs

The traditions of baptizing a child in Russia are dictated by the charter of the Orthodox Church and have remained unchanged for many centuries in a row. Nevertheless, the people have developed their own unspoken rules associated with this sacrament.

They are not supported, but they are not categorically denied by the church, although they are considered echoes of the pagan past of the Slavs. The priests are responsible for ensuring that the sacrament is performed according to Christian canons, and already the parents at home arrange a holiday according to folk traditions. 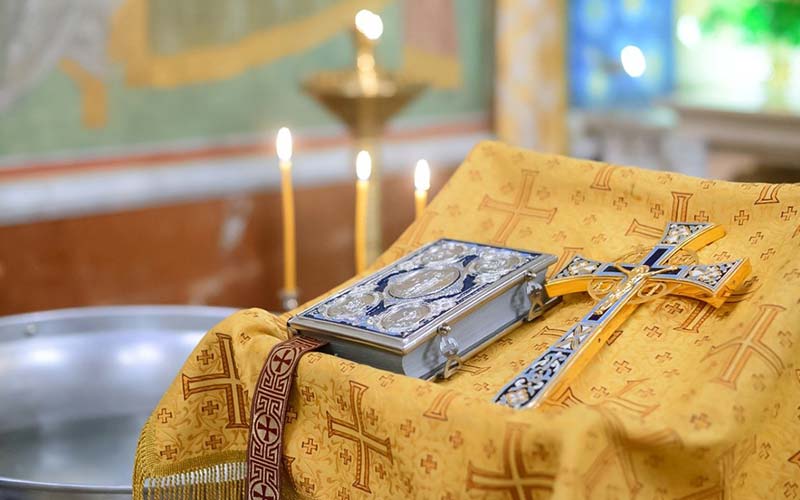 According to tradition, children are baptized 40 days after the birth of the baby.

This rule dates back to Old Testament times: it was on the 40th day that the baby was first brought to the temple, and a special prayer was read over his mother. This is due to the physiology of a woman after childbirth: in impurity, a young mother cannot attend services, touch shrines.

Premature or threatened children can be baptized on the 8th day to strengthen their physical strength or have time to perform the sacrament, so that in case of death, the baby could appear before God, and the church could pray for him.

The period of 8 days was also not chosen by chance: according to the Old Testament rules, it was one week after birth that children were given a name.

The traditions of the baptism of a child regarding the time of the sacrament are not strict. The ceremony can be performed both in the first days after the birth of the baby, and much later. Some parents deliberately postpone this moment until the 7th birthday.

This is explained by the fact that baptism is a sign of repentance and forgiveness of sins, and children under 7 years old are considered sinless and do not even repent before communion. But this is a delusion: a person is born in sin, and it is he who is forgiven by the Lord.

According to the tradition of the church, baptism is usually held on Saturday or Sunday after the Liturgy, but these are unspoken rules, since there are no strict instructions for choosing a day in any document. Even in Great Lent, the sacrament is possible: an exception is made only on Holy Week. 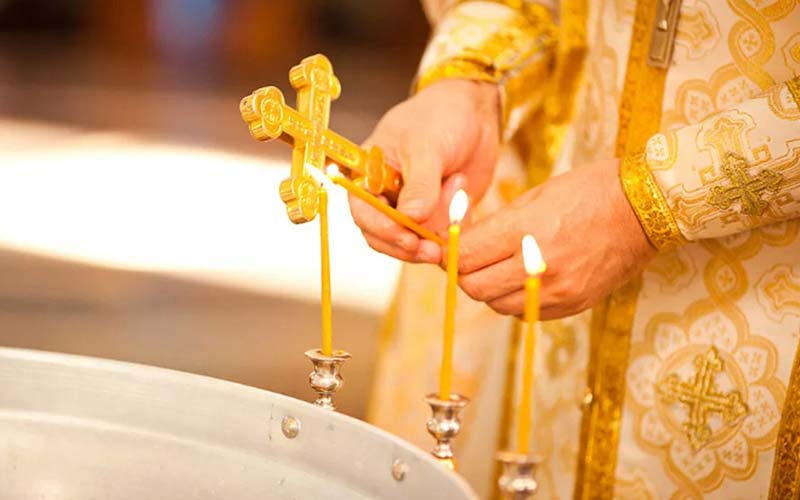 Nowadays, it has become fashionable to choose a richly decorated church for christening, so that during the ceremony you can take beautiful photographs and filming. This makes no sense, since a person can be baptized even at home, in a hospital ward, in the forest.

Baptism is the sacrament of coming to God, and not putting this event on display and public discussion.

Previously, there was no question of choosing a temple: the child was introduced to the church in the nearest parish, while at the same time the sacrament was performed on several babies at once. This tradition of baptism is still preserved: 3-4 babies can be recorded for one day at once.

When choosing godparents, they are guided by both the rules of the church and the unspoken folk foundations.

Signs are also associated with the baptism of a child:

According to an unspoken rule, the godmother prepares clothes for the baby for the sacrament: a diaper, kryzhma, undershirt, and several candles. The godfather gets to pay the expenses.

As for the purchase of a cross, a woman buys it for a girl, and a man buys it for a boy. This is not considered mandatory for the recipients, just such traditions have developed among the people. In addition, on both sides, the baby can be presented with a personalized icon. 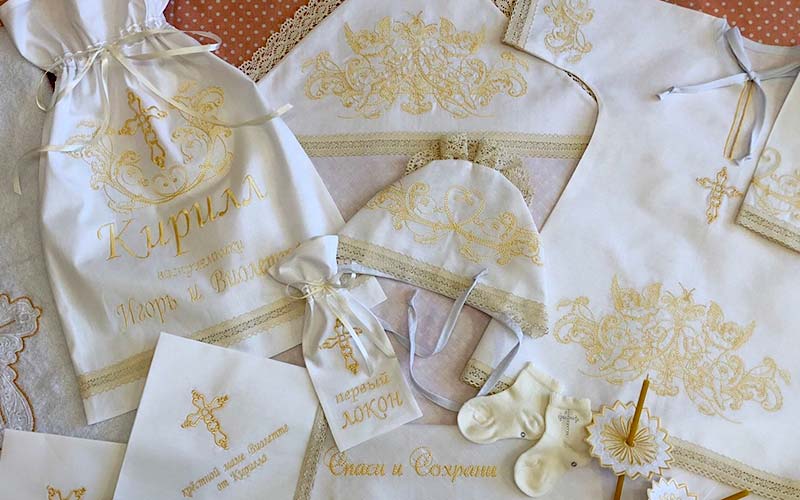 A traditional gift from close relatives is a silver spoon with the name of the baby. Among the most popular gifts: the Bible, the Gospel, bedding and dishes.

The sacrament of baptism takes place according to church charters and does not depend on the place where it is performed. At the same time, there were many prejudices associated with this event among the people. 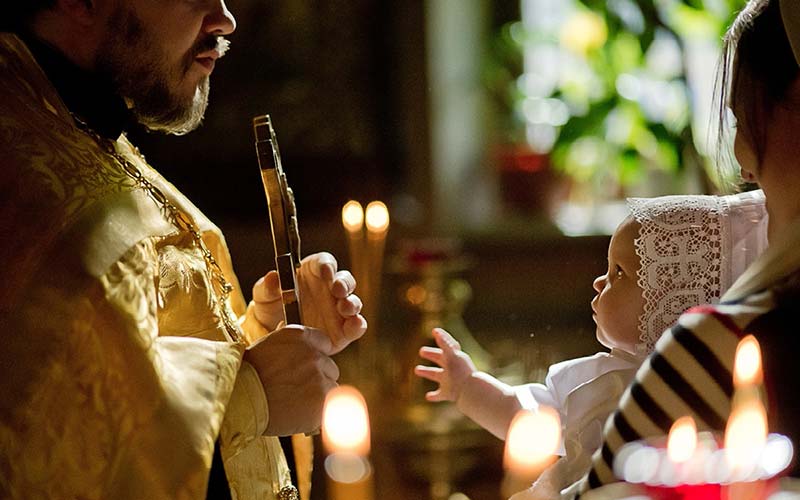 According to tradition, after the baptism of the child, they arrange a feast. Today it is a noisy feast, but in the old days the event was celebrated exclusively at home in a close circle. The main treats were dough and cereal dishes. There was also a tradition to cook porridge for christening.

There were two dishes: father’s and midwife’s. The first option is evil, mixed with wine, with spicy spices and salt, porridge, the second is hearty, seasoned with butter and meat.

The treat from the midwife was put up for auction: first, the guests symbolically gave money, then, a little more, the godfather, and the main costs fell on the shoulders of the godfather. He, having received a pot of tasty, satisfying brew, smashed it on the floor so that the contents would scatter around in small fractions. It symbolized a happy life.

Another custom was associated with porridge for the baptism of a child. Having redeemed a pot of treats, the godfather, putting all the money laid out for him directly on the cereal, presented porridge to the mother of the baby.

Next came the turn of “father’s porridge.” It had to be eaten in order to take all the bitterness of life upon itself, protecting the baby from failures. This was done in a special way: after the first spoonful, all the cereal was thrown up, while the guests made a noise, as if frightening demons.

The godparents also joined in eating such a treat, but they ate porridge with the convex part of the spoon so that the godson would not be stooped in the future.

Godfathers also got other roles: while everyone was sitting at the table, the godfather had to take two buckets and bring water into them. Kuma, after that, took a piece of linen fabric prepared in advance and ran with it to the river to wash it – they did this so that the baby started walking faster.

Many superstitions are associated with this important event in the life of every person. They are not supported and even denied by the church, while many people try to adhere to the folk rules for organizing christenings. 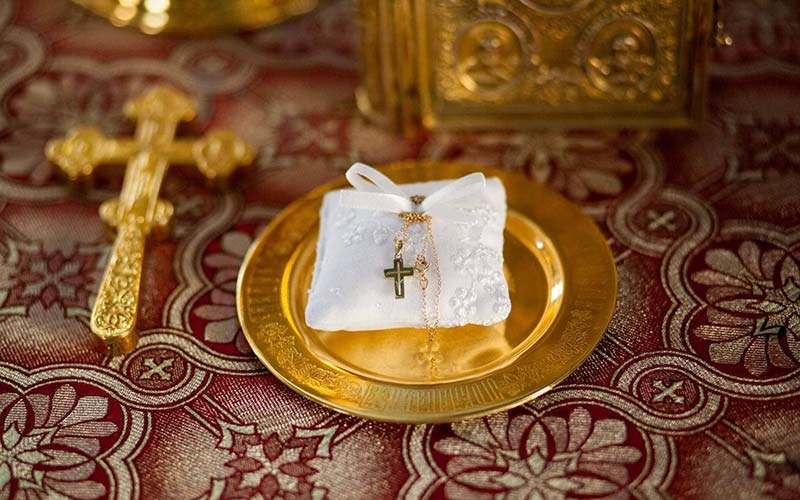 The Orthodox Church has a negative attitude to such superstitions, since this is considered a manifestation of faith in otherworldly forces, and not hope in the will of God. The true traditions associated with this sacrament can be learned from the priest. By adhering to the rules established by the church, you can ensure a happy life for your child.