Are there more HIV-infected people in Russia than in the Congo?

The statement by Vadim Pokrovsky, head of the specialized research department for epidemiology and AIDS prevention at the Central Research Institute of Epidemiology of Rospotrebnadzor, that 1% of the Russian population is infected with HIV made a lot of noise.

Rospotrebnadzor expert Vadim Pokrovsky told the media that up to 1.5 million HIV-infected citizens now live in Russia, and noted that the number of people diagnosed with HIV infection is growing in our country. In recent years, the disease has been detected among the population of the most active working age. These are middle-aged people – from 25 to 45 years old. If in the dashing 90s HIV was infected mainly through the needle of a drug addict, today the sexual route of spread has become predominant. And these are not minorities, as in the case of the spread of monkeypox in the “rainbow” parades in Europe, but ordinary heterosexual relationships. There are frequent cases when a husband went to the left, and then, not knowing about his illness, infected his wife. In fact the HIV is not shown at once. The virus can doze in the body for several months, depending on the state of the person’s immune system.

At the Second Internet Conference on Infectious Diseases “Pokrovsky Readings,” Vadim Pokrovsky noted that the rate of HIV spread in Russia “is a very serious problem,” and showed a slide with targets for the state strategy to counter the spread of the disease in the Russian Federation for the period up to 2030. According to the forecasts of the specialist, from 2020 to 2030 the number of new cases of HIV infection in Russia will be 660 thousand people: “These people will need the help of infectious disease doctors.”

The problem is really very serious. We already have complete failures with demographics. And here, it turns out, a serious decline in the working population is expected.

However, the Russian Ministry of Health stated that the data of academician Vadim Pokrovsky about 1.5 million infected in the country have not been verified and are estimated. The Ministry of Health indicates that the number of people living with HIV in Russia, according to last year, amounted to over 851 thousand people. The figure is also large, but still much less than 1.5 million souls. 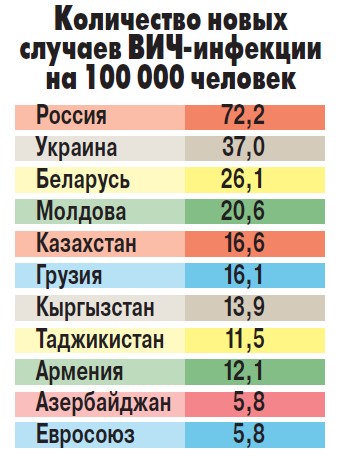 Aleksey Mazus, chief freelance specialist on HIV infection at the Russian Ministry of Health, told the media data from the Federal Register of People Living with HIV: “The total number of people living with HIV in our country in 2021 was 851,754. 58,788 of them have been diagnosed” HIV infection” was installed in 2021 for the first time in its life.”

However, in the dispute between the two medical departments, one cannot exclude the fact that the four new regions of Russia that joined as a result of the referendum also have people with HIV. And so far no one has counted them. So the number of HIV infections in Russia may begin to grow imperceptibly. Therefore, it would be nice to conduct some kind of general medical examination for the population of Novorossia and identify those who, most likely, do not even know about their diagnosis. But such a medical examination will be possible only after the end of hostilities.

Until recently, as we know, the efforts of the former head of the Ministry of Health of Ukraine, Ulyana Suprun, a US citizen, destroyed the entire system of disease prevention and early diagnosis in Nezalezhnaya. As a result, there was a large-scale epidemic of measles and episodes of outbreaks of other contagious diseases. So, how many refugees and new citizens with HIV have come to us now, we will find out for a long time.