The stern figure of Count Alexei Andreevich Arakcheev hangs over almost the entire reign of the Russian Emperor Alexander I in the first quarter of the 19th century. As the main friend and advisor of the Emperor, he became the most hated and dangerous person in Russia. And the period of his power was called “Arakcheevism”, which symbolized the reactionary and despotic nature of the era.

It was a mystery to Alexander’s subjects why their young and handsome tsar, who ascended the throne in 1801 on a wave of popularity due to his widespread liberal ideas and gentle nature, chose this cruel and unimaginative artillery officer as his main confidant and first minister. … Some said that Arakcheev, whose face was described as “a strange mixture of reason and evil,” acquired his influence on Alexander through hypnosis or even black magic. 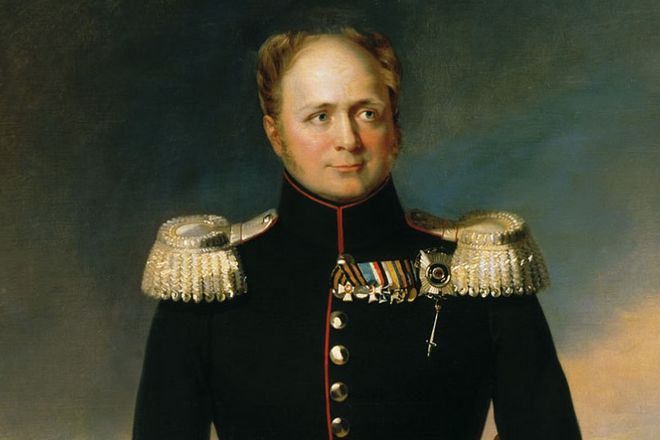 It was only towards the end of the reign that the Russian people began to understand some of the difficulties and contradictions in the character of Alexander I. Even then, few people realized that the symbols of imperial rule, which they hated so much by that time, were the result of Alexander’s policy, and not Arakcheev’s policy.

The need for reform

Alexander inherited a sprawling and backward empire. The country was supported not by a weak administrative structure, but by the rule of the landowning class. Who owned more than half of the peasantry. Just like the planters in South America owned their slaves.

Guests from Western Europe were amazed at both the extravagance of the way of life of the Russian aristocracy and the primitiveness of the country as a whole. While nobles and country gentlemen built mansions and palaces with their armies of serfs and indulged their every whim. The peasants dug the earth with clumsy implements and lived in squalid villages. Scattered across thousands of miles of Russian countryside. Much of which has been turned into a sea of ​​mud in the spring and fall and a frozen snowy desert for six long winter months.

Little was the difference between provincial towns and villages. There was not even an asphalt road between Moscow and St. Petersburg. While in these great cities themselves, there were many magnificent palaces and churches.

Alexander received a pro-Western education from his grandmother, Catherine the Great. And he knew well that Russia’s backwardness was partly due to its rigid social structure. And, in particular, the vices of the serf system. Serfdom gave rise to idleness and sullen obedience of the peasants. And the landowners are irresponsible and intolerant of any restrictions on their freedom. 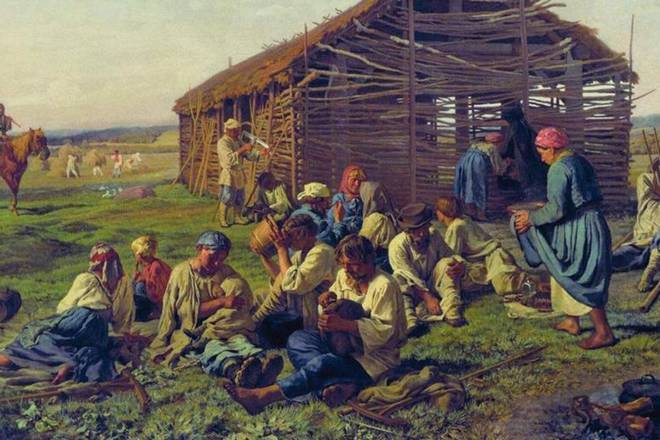 Therefore, great hopes were pinned on the fact that a small group of liberal aristocrats gathered around Alexander I at the beginning of his reign. Seeing in him the first tsar who decided to fight and ultimately end what they called “the curse of Russia.” But they misjudged him. At first, Alexander fiddled with ideas of reforms, created ministries to improve his government.

But it soon became apparent that he would not do anything to jeopardize his own unlimited power. At the same time, he developed a strong liking for military demonstrations and parades. Even in civilian life, which contrasted strangely with his interest in reform.

The appearance of Arakcheev at the throne

Alexander summoned Arakcheev to St. Petersburg at the very beginning of his reign. They first met in Gatchina, on the estate of Father Alexander Pavel near St. Petersburg. Arakcheev, rose from obscurity and became a brilliant young artillery officer. He was summoned by Grand Duke Paul to help him conduct military maneuvers.

During Paul’s brief, chaotic reign, Alexander found his military duties extremely tedious. Therefore, he began to rely heavily on Arakcheev for advice and help. And he was too ready to close his eyes to the unattractive side of Arakcheev’s character. He acquired a reputation for being cruel towards junior officers and soldiers under his command. They even said that in a fit of rage on the parade ground, he once bit off an ordinary ear.

In the first decade of Alexander’s reign, Arakcheev’s military career was extremely successful. Alone, he built artillery, turning the infantry into the main weapon of the Russian army in its fight against Napoleon. Appointed minister of war in 1807, he reformed a horrific military supply system.

In addition to his military successes, Arakcheev made a name for himself in another area of ​​life, as an enterprising landowner-experimenter. The social experiments he conducted on his estate in Gruzino, a hundred miles southeast of St. Petersburg, should have significantly influenced his career and the reign of Alexander.

Although Arakcheev built for himself a magnificent house and church on the estate, he did not limit his innovations to construction only. His goal was to change the whole way of life of the peasants. Orders and reprimands fell on their heads to keep their new homes in perfect condition. He hired a doctor to improve the health of the peasants, and gave them a smallpox vaccine. In an effort to reduce infant mortality, he himself drew up a care instruction entitled “Brief Rules for Peasant Mothers in the Georgian District”.

A communal bank was created that provided interest-free loans to poor peasants who wanted to improve their livestock. Striving to eradicate drunkenness, the main vice and only distraction of their serfs. He closed liquor stores and dispensed only small quantities of wine on holidays.

In his bureaucratic manner, Arakcheev also resorted to force. To force his serfs to accept his reforms. Each peasant carried with him a paper in which his misdeeds were recorded. Punishments were differentiated. For the first violation of the flogging in the stable. For the second – flogging by soldiers of the Preobrazhensky regiment with special truncheons, known as “sticks of Arakcheev”.

However, Gruzino quickly became the most famous estate in Russia. And Arakcheev was rightfully proud of his creation. He never tired of receiving a constant stream of visitors from all over Russia and from abroad.

The emergence of military settlements 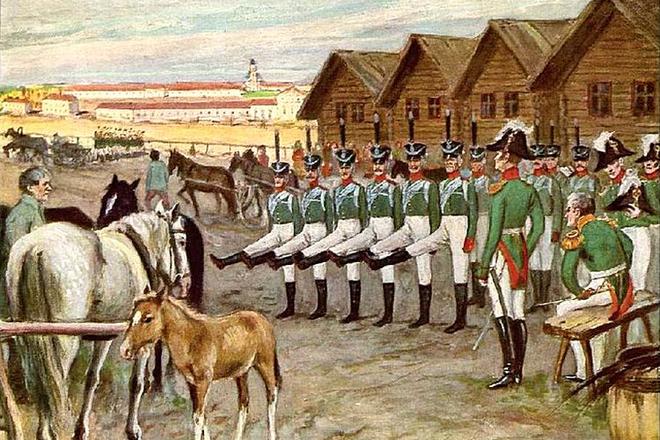 In 1810, when the emperor first commissioned Arakcheev to lead a project he had been courting for some time, the count drew on his experience in Gruzino. Thus, military settlements arose, which became both the greatest achievement of Arakcheev and the greatest failure of Alexander.

The military settlement theory was not entirely new. The soldier had to combine his military duties with agriculture. So that the army units can become self-sufficient, and the soldiers can live more stable on the ground. At the beginning of the nineteenth century, the principle of a sedentary army was already applied in Austria, Prussia and Finland.

By 1810, it seemed to Alexander that Russian military settlements could provide an answer to some of his problems. As Napoleon’s power continued to grow, it became clear that Russia would need a huge standing army for many years to come.

When the decrees were published, landowners and state-peasant communities had to surrender a certain number of their people. And the army service lasted twenty-five years – all the working years of a person. Often separated from their families forever, the conscripts were subjected to a harsh system of military discipline. And, in the end, they were sent to roam the country prematurely aged and deprived of roots.

The French invasion of 1812 caused unimaginable suffering and destruction across vast areas of Russia. It was only in 1815 that Alexander felt that he was able to turn his attention back to his internal problems. He soon returned to his plan to establish military settlements. And now the plan is even more ambitious. 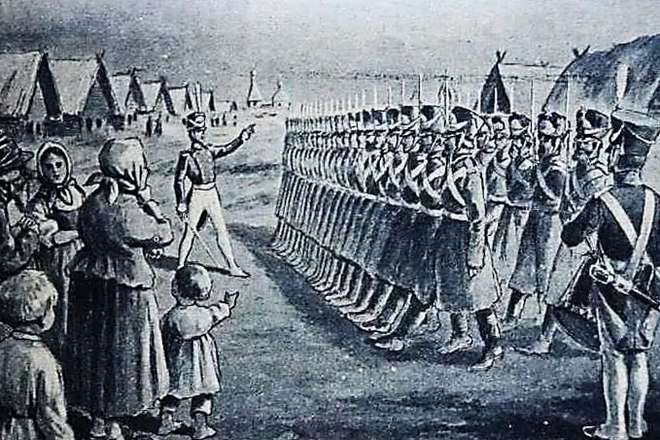 In 1816, the battalion of the Count Arakcheevsky regiment was stationed on the royal land in the Novgorod province, not far from Gruzino. The area was also removed from the jurisdiction of local authorities, exempted from taxes, and annexed to the newly formed Corps of Military Settlements.

As a result of his efforts, the construction program was completed at an astonishing speed. The colony was divided into two parts: “sedentary battalions” and “active battalions”. The first consisted of soldiers. Which were provided with houses and land. And also male peasants who were already engaged in agriculture in the area. And the latter consisted of combat detachments. Built on settled peasants and soldiers. Both units were required to devote at least two days a week to training and exercise.

Reasons for the failure of the military settlement project

The driving force behind the Emperor’s resolve was his vision to establish more than just military communities. The settlements were to become pilot projects for a campaign to improve the entire way of life of the Russian peasant, based on a new kind of communal life. Improved breeds of livestock were raised in the settled shelves, and experimental farming was widely practiced.

However, Alexander and Arakcheev did not succeed in stirring up enthusiasm for colonies among the settlers themselves. The changes were imposed from above too quickly and without considering local vulnerabilities. The life of the peasants was severely disrupted. Arakcheev’s attempt to establish that the land cultivated by the fighters of the sedentary battalions belonged to them was undermined by his other demand. According to which a settler who is poorly engaged in agriculture should be deprived of his property and transferred to combat battalions.

Officers were some of Arakcheev’s fiercest critics. Who were supposed to manage the settlements with him. Even though they were ill-prepared for the task, they did not empathize with the social experiment. The same opposition was shown by the military headquarters of the Emperor and the nobility. Barclay de Tolly, Alexander’s minister of war, wrote a lengthy memo. In which he showed that the soldiers will become second-class peasants, and the peasants – second-class soldiers.

Nevertheless, despite opposition from all sides, Alexander continued to create new settlements. Until his sudden death from fever in 1825. After the death of Alexander, Arakcheev was deprived of his official duties and retired into relative obscurity in Gruzino. Having transferred his command of the settlements to Prince Shakhovsky.

And yet the colonies had to bring about a final coup. In 1831, at the height of the cholera epidemic, a massive uprising took place in the Novgorod settlement. The uprising of 1831 was the final link in the experiment. Settlers set fire to exemplary villages, hospitals and schools, hacked into armories and killed anyone they could get their hands on. Even more alarming was the reaction of soldiers from a neighboring settlement, who were deployed to suppress the insurgents. Because they refused to obey their officers and threatened to join the uprising. 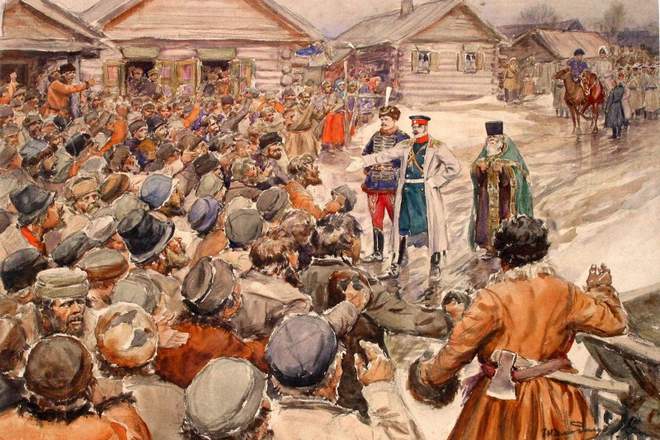 Now Nikolai fully realized the danger posed by the settlements. Although the last settlement was not officially abolished until 1857. The settlement regime was so changed after 1831 that they acted only in words.

Arakcheev died in 1834, leaving not a single mention of the destruction of his work. He had no heirs. And the Gruzino estate became a base for military cadets, who were christened Arakcheevsky cadet corps.

While the peasants of Gruzino returned to their old habits, the experiment left bitter memories. Which were erased only by the abolition of serfdom in 1861. And the settlements firmly consolidated the reputation of Arakcheev as a sinister tyrant in the Russian people.