“And before death it was … 3 minutes”

The world’s first family dynasty of astronauts – the Volkovs.

Volkov Sr. went into outer space twice, the younger one – four times, he is the first cosmonaut in the second generation. Then the fathers’ business will be continued by the sons of Romanenko, the Skvortsovs …

Alexander Alexandrovich made an appointment for me in Star City. Before that, I visited the local museum of cosmonautics, which opened in June 1967. Often the cosmonauts themselves lead visitors through its halls. More often than others – Alexander Volkov. This is the special value of such excursions – people learn about flying around the balloon, as they say, first-hand.

In 1971, the year of the 10th anniversary of Yuri Gagarin’s flight, a representative delegation of American astronauts entered the museum. Among them was the first man on planet Earth to set foot on the moon – Neil Armstrong. He presented the museum with an exact copy of the commemorative plaque that hangs in the lobby of the NASA administration building with the inscription in English: “In memory of Yuri Gagarin, the first person to visit space on April 12, 1961”.

– Then Neil said about the star hero of the USSR: “He called us all into space.” And Alexandra Volkov too?

– I heard the TASS message “There is a Soviet man in space” in my own school # 10 in the miners’ Gorlovka. I was then 13 years old. I remember very well that warm spring day and the general joy of people. Many boys of the country then fired up the dream of becoming astronauts. And I, frankly, did not even dream about it. Am I an astronaut? No, this is an unattainable height for me!

But on that sunny day, April 12, 1961, I firmly and finally decided to become, like Yuri Alekseevich, a military pilot. I entered the Kharkov school.

– Did your son Sergei choose the profession of an astronaut on the advice of his father?

– He grew up in Star City, whose life was permeated through and through with preparations for flights to near-earth orbit. So, I think, space is in his genes, in his blood. At first, he followed in his father’s footsteps – he became a military pilot. He graduated from the Tambov Aviation School, began to fly. He never once told me that he dreams of exploring space. And suddenly I read his statement with a request to enroll in the cosmonaut corps. Frankly, at first it hurt me that I wrote it without consulting my parents. Perhaps because he knew that he would not receive blessings either from me, much less from Anna Nikolaevna’s mother. If you only knew how hard the lot of wives and mothers of astronauts is! Women do not know about all the troubles that lie in wait for them, but their hearts are so sensitive … Dangerous – and very much! is our profession.

In addition, enrollment in the squad does not guarantee that you will definitely fly into space. There were 9 applicants in my group, and only five got their turn. After all, this is a life tragedy – to invest so much effort and years in training and in vain. I went into orbit after 11 years of intensive training.

– Was it scary in orbit? Has life ever hung in the balance?

– Every normal person in an extreme situation experiences a feeling of fear. The astronaut too. But he is a professional, carefully preparing to meet any surprise. If he stops reacting to danger, he will not be ready for the unexpected. In each flight, the astronaut has risky situations that can lead to death.

– Please tell us about at least one similar one in orbit.

– First, I’ll tell you about a case from my son’s life. His exit with a partner into outer space was associated not with experimental work, but with repairs. In the entire history of astronautics, no one has done this before. They determined that when undocking, the pyrobolt would not work and the descent vehicle would not be able to separate from the instrumentation compartment. How does it work? When undocking, three volts of voltage are applied, the spiral ignites the charge, it explodes and the lock opens.

While at the MCC, I saw how Sergei took out a bolt filled with explosives from the side of the ship in order to examine it. Terrible minutes! The station’s speed is 108 meters per second. Pirobolt could explode in the hands of his son from electrostatic electricity. And then the end …

– And Sergei knew that?

– Of course I knew! He deliberately took risks. I sighed with relief when my son inserted explosives into the armored case. On that day, my hair noticeably increased gray …

Cosmonaut Alexander Volkov during a spacewalk

BORN IN A SHIRT

Now I’ll tell my story. During the second flight, from November 26, 1988 to April 27, 1989, I had the honor for the first time in the history of our cosmonautics to leave the orbital station together with the foreign cosmonaut Jean-Loup Chretien. It was necessary to conduct (according to the French program) one extremely difficult experiment: to reveal a large, 6 by 8 meters structure, which consisted of thin carbon-fiber tubes, sharp as a razor blade. She was supposed to open automatically, on command from the station, but did not obey the pressed button. It had to be done manually. A command came from the MCC to move away from the structure, at least nine meters, so that the sharp tubes, if the antenna suddenly opens, would not touch our spacesuits and cut them. Death would come instantly. Alas, the “Frenchwoman” did not give in. And then I, the commander, took full responsibility. He left Chrétien aside, and he was forced to come close to her, grab his hands and start shaking. Quiet at first, then stronger, stronger. I was lucky: the structure opened without touching me. You know, I was born in a shirt …

The exit was on the verge of tragedy also because the resource of our spacesuits was designed for 6 hours, and we entered the station and closed the hatch through
5 hours 57 minutes. Chretien then showed me their newspaper with the headline: “And before death it was … 3 minutes.” In general, as in the famous Soviet song: “And there are four steps to death.” 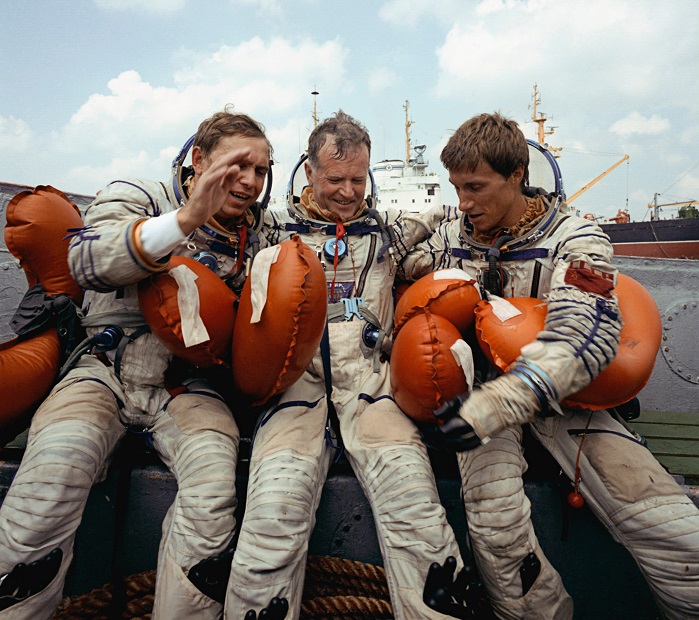 LEFT FROM ONE COUNTRY, BACK TO ANOTHER

– That year the President of France received you and your wife Anna Nikolaevna at the Elysee Palace and presented the country’s highest award – the Order of the Legion of Honor. And the mayor of Paris Jean Chirac has awarded you the title of honorary citizen of the city. This is how the feat of the Soviet cosmonaut was celebrated in Paris. Alas, in our country Gorbachev and his entourage interrupted the Soviet tradition of awarding the Gold Star medal for the second flight into space. I know that you were presented for an award, but they didn’t give you: they say, now flight into space is a common thing, not a heroic one.

– Yes, there was a great life risk on that flight. I went for it because I absolutely wanted to complete the task.

They are not sent into space under duress. By the way, at any moment you can tell the head of the Cosmonaut Training Center: “I will not fly.” You will not be forced, reproached. Takeoff – only at the call of the heart.

A person flies into space not for money, not for regalia. We are promoting new ideas, new technologies there so that people can live well on planet Earth.

Unfortunately, little is left of science on earth today. Some prominent scientists passed away, others went abroad in the dashing 90s, when geniuses were doomed to a beggarly life in Russia. It is a pity that they use their talent and intelligence not for the good of their homeland. Let us take comfort in the fact that they are still there, behind the cordon, working for the good of all mankind.

– Yes, a historic flight! They flew away from the great world power of the USSR, but returned – it is no longer there, disintegrated … Sergei Krikalev and I returned to another country. Life has changed dramatically: other moral values, money have become a measure of a person’s success. The heroes of the media are mummers, rich people, strange types. About the return of the crew from orbit in separate newspapers – in one line, on television – in a second. The prestige of the cosmonaut’s profession began to decline rapidly. And even then to say: we are paid less than the drivers of the capital’s trolleybuses …