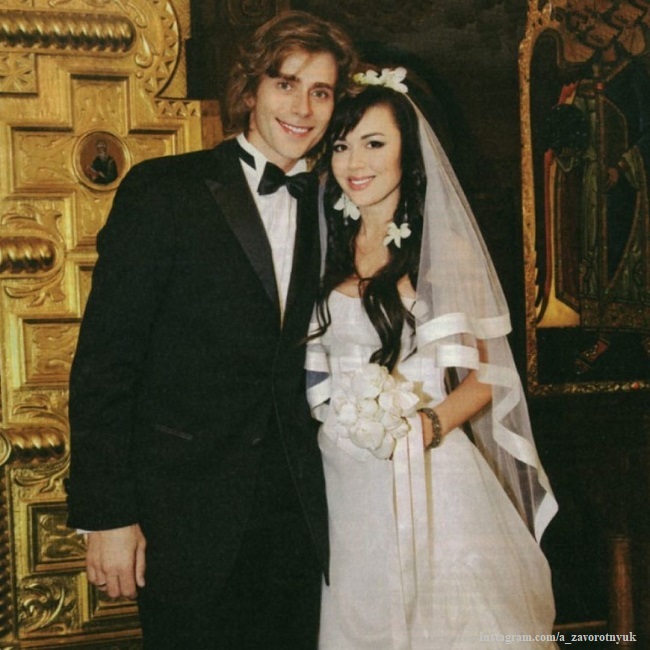 For the first time in a long time, actress Anastasia Zavorotnyuk has a post in her stories - her photograph in which the artist with a bouquet of white roses gently cuddled up to her husband, Peter Chernyshev.

Anastasia Zavorotnyuk has been fighting cancer for more than a year and a half. The star of the TV series "My Fair Nanny" has been diagnosed with glioblastoma - this is one of the most aggressive tumors, since relapses are frequent when present. The third husband of the actress, Pyotr Chernyshev, is doing everything to make his beloved get better as soon as possible. The skater works for wear and tear, paying for expensive treatment. And he spends all his free time with his wife.

On September 12, one of the most beautiful couples in Russian show business celebrates a special day. The couple celebrate their 12th wedding anniversary. Fans closely follow all the news regarding the state of Anastasia Zavorotnyuk. This time, the audience was moved to tears by a rare photo of the actress with her husband Peter Chernyshev. In the frame, the "beautiful nanny" with a bouquet of white roses anxiously clung to the skater.

"It is priceless to meet a person who will completely share life with you, no matter what trials it prepares. It so happened that recently you have had to completely change your way of life, habits, thoughts, aspirations. And it is all the more important to see that in this situation you have become even more dear and necessary to each other. Your love is your greatest supporting force, a real gift that you both deserve."- says the caption to the frame, also published in the artist's support group account.

The fans wished the spouses to overcome all adversity and be happy. In the comments, many subscribers admitted that they could not hold back tears, looking at a rare picture.

Recall that in September 2008, Anastasia Zavorotnyuk and Pyotr Chernyshev tied the knot, and soon the couple got married. For the actress, this union became the third, but only with the skater did she feel truly happy. The actress met Peter on the set of the show “Dancing on Ice. The Velvet season". According to the skater, he was literally struck by the beauty of Zavorotnyuk. Fell in love with her at first sight. The actress herself lost her head from the handsome athlete.

"We saw each other on the first day of filming, which is always very hectic. I ran past the participants, already in a dress for filming, with styled hair, and saw a young man. We met eyes, and I felt: mine. It felt like an electric shock", - the artist recalled her meeting with Peter.

The skater proposed to the actress while on holiday in Sardinia. Chernyshev, like Poseidon, came out of the waves with a diamond ring in his hands, got down on one knee and asked his beloved to become his wife. "It looks like happiness. It would seem that addiction should come, or maybe irritation appears. But no. I was waiting for this moment - now, now everything will pass, everything will end. It still passes. Many books have been written about this. But time passed, and the feeling remained the same. And I stopped waiting, afraid, and just took the state of affairs for granted. Well, nothing annoys me about Petya. Absolutely nothing", - a celebrity told about her feelings for Chernyshev.

When Nastya became pregnant, she was 47 years old. The actress hid her interesting position. Baby Mila was born in October 2018, but the public was told about her appearance a few months later - in March 2019. Peter and Anastasia literally shone with happiness. However, soon after the birth of the heiress, Zavorotnyuk was diagnosed with a terrible brain tumor.

Friends, colleagues and fans of Anastasia pray for her health, wishing a speedy recovery. They hope that the "perfect nanny" will overcome the disease and return to normal life.