Africa is perhaps the most contrasting and mysterious of the 5 continents of our planet. Researchers and tourists from all over the world are attracted not only by its natural and animal diversity, but also by numerous tribes and nationalities, of which there are about 3,000. do not surprise.

This is one of the most cruel and unfriendly tribes in Africa, whose representatives meet outsiders with war clubs or firearms that come from Somalia. Another characteristic feature of Mursi is an unbearable fetid aroma emanating from all of its representatives. It is associated with a homemade ointment that they rub on their bodies to protect themselves from poisonous parasites and insects. 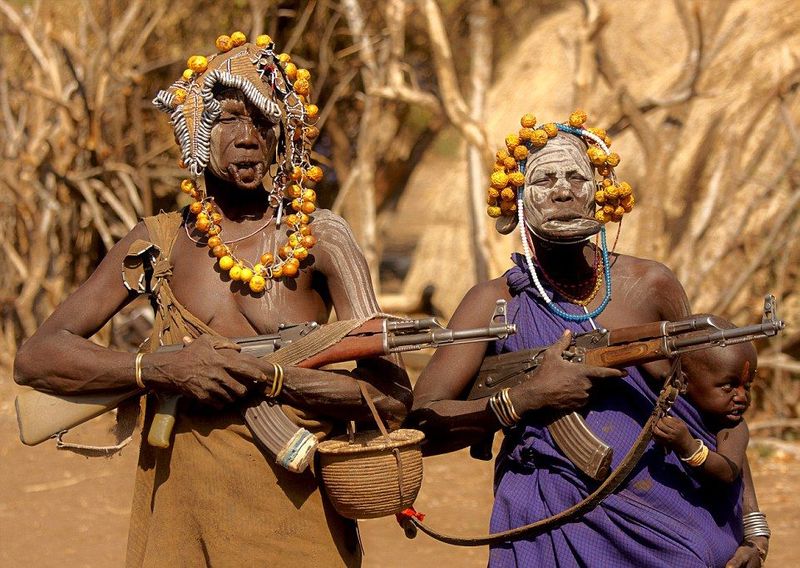 Men often get into violent fights for leadership. If such a showdown ends with the death of one of the participants, the survivor has to give his wife to the family of the deceased as compensation. It is customary for men to adorn themselves with fang earrings and horseshoe-shaped scars, which are applied in case of killing an enemy: first, the symbols are carved on their hands, and when there is no room left for them, other parts of the body are used.

The women of the Mursi tribe look very unusual. A stooped back, a sagging belly and chest, and instead of hair on the head, a headdress made of dry branches, skin of animals and dead insects is an amazing description of a typical representative of the beautiful half of Mursi. Their image is complemented by a clay disc (debi) inserted into a cut on the lower lip. Girls themselves have the right to decide whether to cut their lips or not, but for brides without such jewelry they give a much smaller ransom. 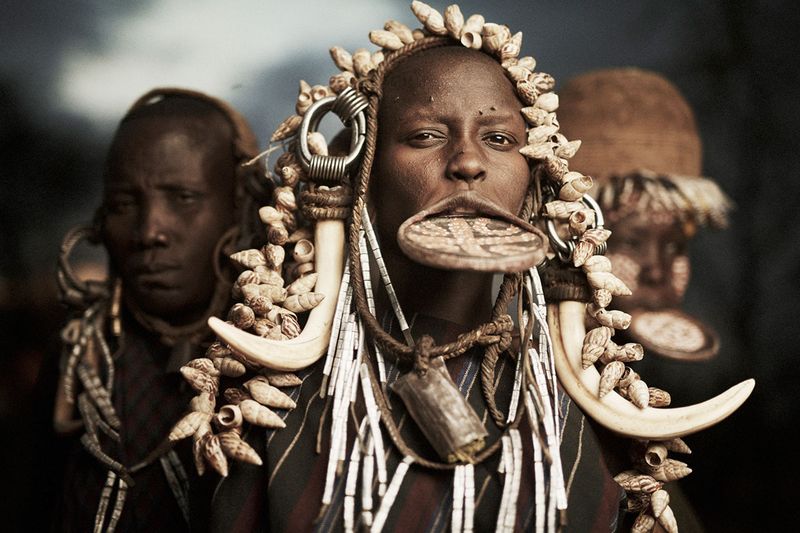 The whole Dinka people living on the territory of Sudan number about 4,000,000 representatives. Their main occupation is cattle breeding, therefore, from childhood, boys are taught to respect animals, and the welfare of each family is measured by the number of livestock heads. For the same reason girls are valued by the Dinka more than boys: in case of marriage, the bride’s family receives a whole herd as a gift from the groom. 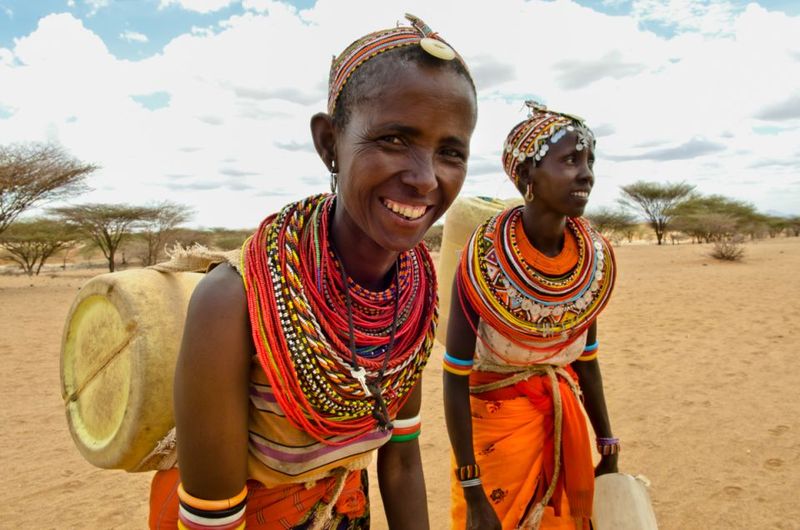 The appearance of the dinka is no less amazing: men usually do not wear clothes and adorn themselves with bracelets and beads, while women wear robes only after marriage and are often limited to a goatskin skirt or beaded corset. In addition, this people is considered one of the tallest in Africa: the average height of men is 185 cm, and for many it goes beyond the 2 m mark.Another feature of the Dinka representatives is deliberate scarification, which is practiced even among children after reaching a certain age and by local adds to the appeal. 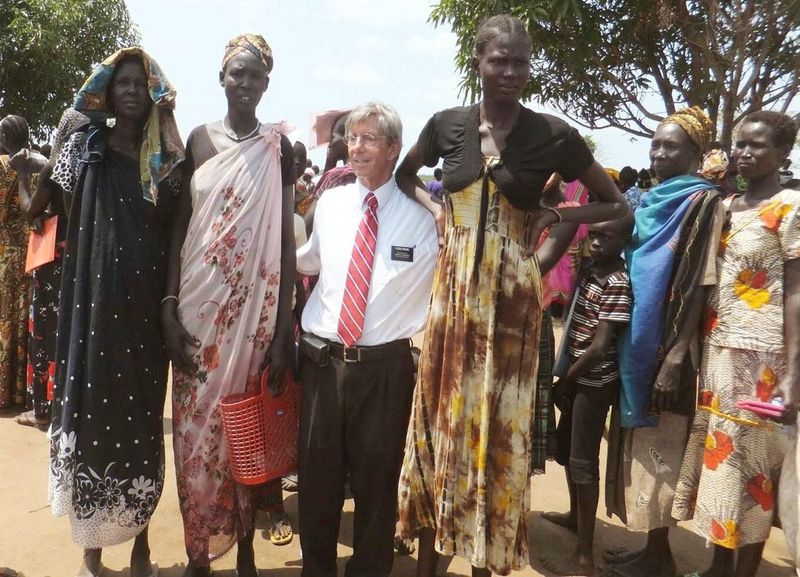 Central, Eastern and Southern Africa are home to numerous representatives of the Bantu people, whose number reaches 200 million. They have a peculiar appearance: tall (from 180 cm and above), dark skin, hard spiral curls. 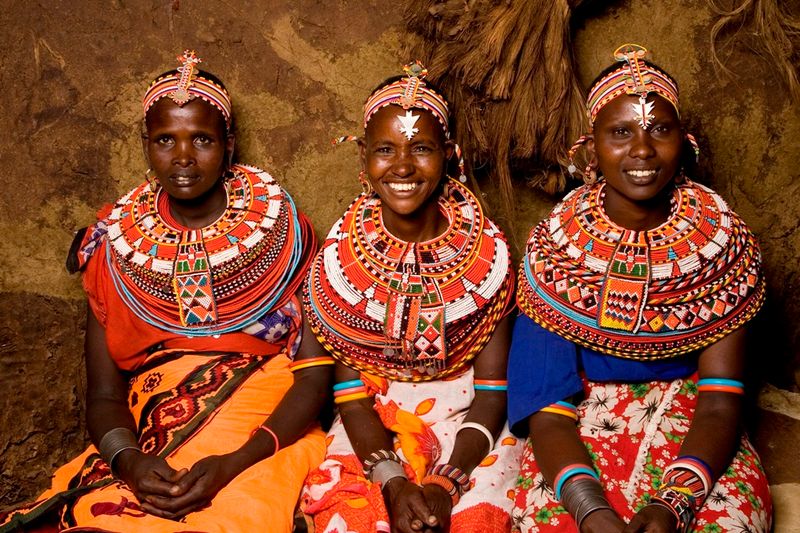 Bantu is one of the most amazing and most developed peoples of Africa, among which there are politicians and cultural figures. But, despite this, the Bantu managed to preserve the traditional flavor, centuries-old traditions and rituals. Unlike most of the peoples living on the hot continent, they are not afraid of civilization and often invite tourists to their excursions, which provide them with good earnings. 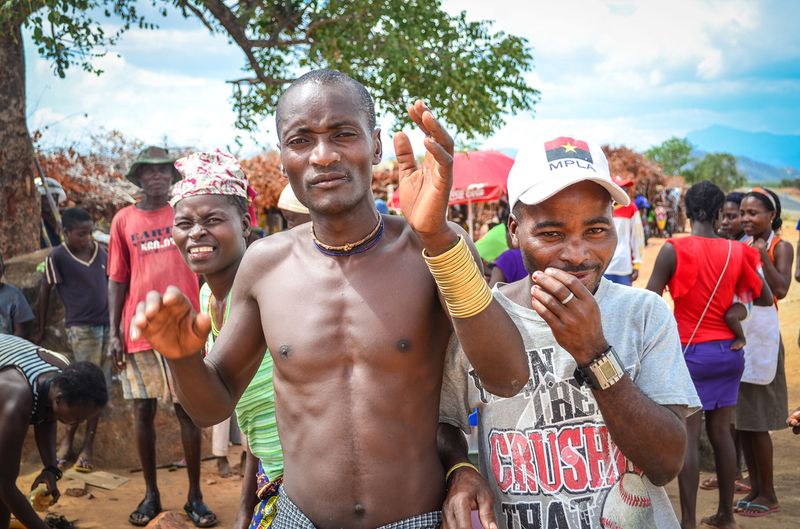 The Masai are often found on the slopes of Mount Kilimanjdaro, which holds a special place in the beliefs of this amazing tribe. Its representatives imagined themselves to be the highest people of Africa, true beauties and favorites of the gods. Due to such conceit, they often treat other nations with contempt and do not hesitate to steal animals from them, which sometimes leads to armed conflicts. 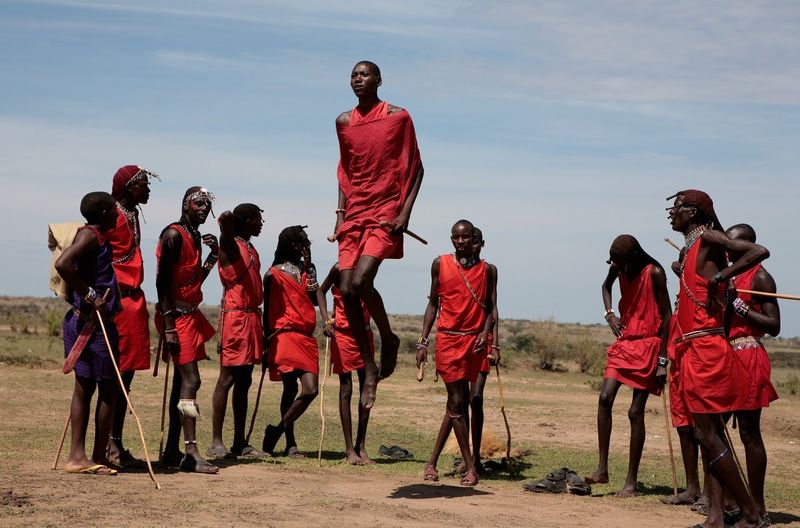 The Maasai live in a dung-covered dwelling made of twigs, often built by women. They feed mainly on milk and blood of animals, and meat is a rare guest in their diet. In the absence of food, they pierce the cow’s carotid artery and drink blood, and then close up this place with fresh manure in order to repeat the “meal” after a while.

A distinctive feature of the beauty of this amazing tribe is the drawn earlobes. At 7-8 years of age, children are pierced with a fragment of a horn and gradually expanded with pieces of wood. Due to the use of heavy jewelry, the earlobes sometimes hang down to shoulder level, which is considered a sign of the highest beauty and respect for their owner. 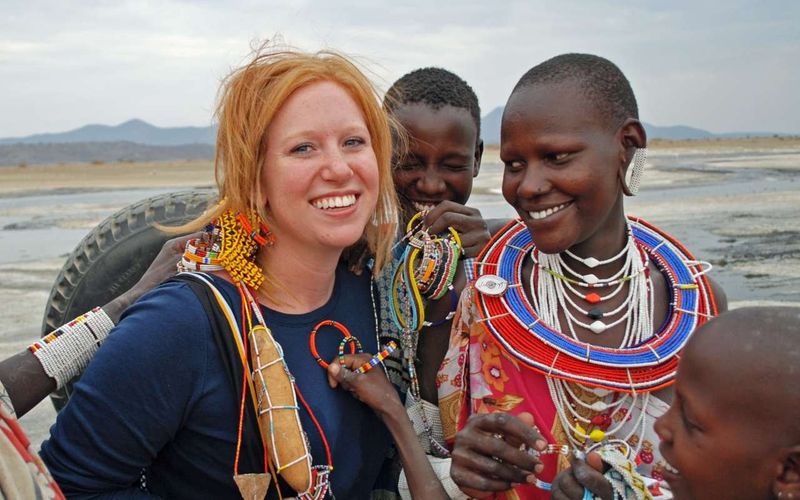 In the north of Namibia, the original Himba tribe lives, whose representatives carefully guard the established way of life from strangers, practically do not wear modern clothes and do not enjoy the benefits of civilization. Despite this, many residents of the settlements can count, write their own names and speak some phrases in English. These skills come from government-run mobile elementary schools, where most of the Himba children study. 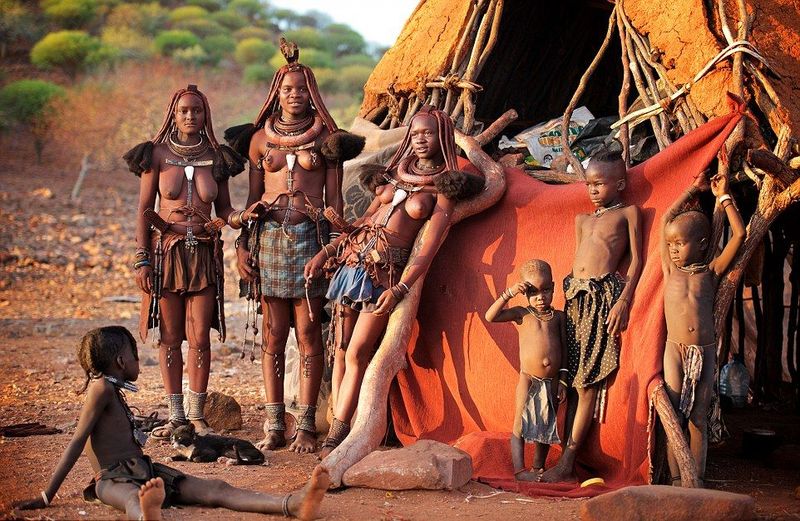 Appearance is of great importance in the Himba culture. Women wear skirts made of soft leather and adorn their neck, waist, wrists and ankles with countless bracelets. They apply a daily ointment made from oil, herbal extracts and crushed volcanic pumice stone to the body, which gives the skin a reddish tint and protects the body from insect bites and sunburn. When they scrape off the ointment at the end of the day, dirt will come off with it, which also helps to maintain personal hygiene and cleanliness. Perhaps thanks to this amazing ointment, Himba women have perfect skin and are considered one of the most beautiful among the tribes of Africa. With the help of the same composition and other people’s hair (often the father of the family), women construct their hairstyle in the form of numerous “dreadlocks”. 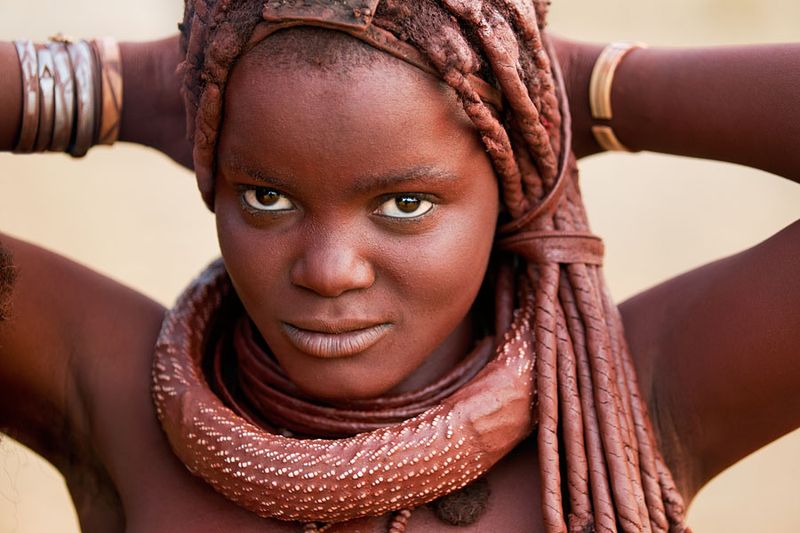 Hamar rightfully belong to the amazing tribes of Africa and one of the friendliest in South Ethiopia. One of the most famous khamar customs is initiation into men after reaching adulthood, for which a young man needs to run 4 times from side to side on the backs of bulls. If, after three attempts, he fails to do this, the next ceremony can be performed only after a year, and if successful, he receives the first property (cow) from his father and can look for a wife. It is noteworthy that the ceremony of young men is held in the nude, which symbolizes childhood, with which they say goodbye. 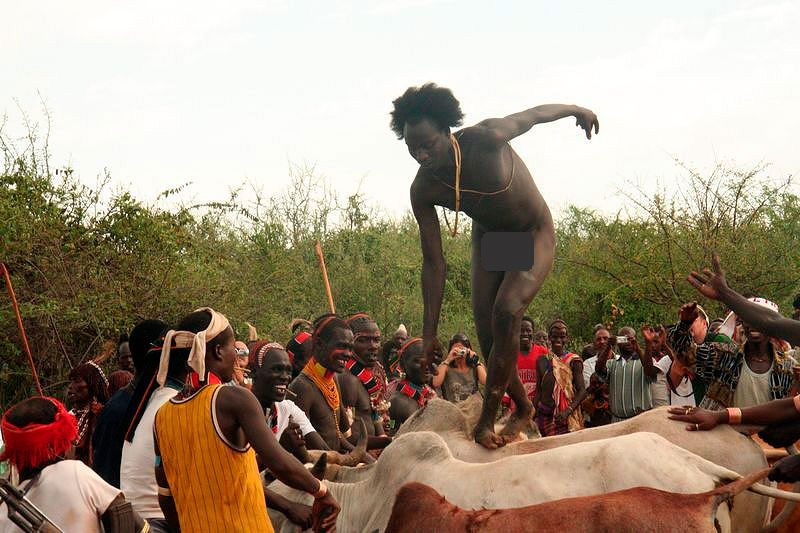 The hamar has another, rather cruel ritual in which all girls and women can take part: they perform a traditional dance in front of men and receive blows from them with thin rods on the back from them. The number of scars remaining is the main source of pride, an indicator of a woman’s strength and endurance, which increases her value as a wife in the eyes of men. At the same time, hamaras are allowed to have as many wives as they are able to pay ransoms (dauri) for them in the form of 20-30 heads of cattle. But the highest status remains with the first wife, which is confirmed by wearing a collar with a handle made of metal and leather. 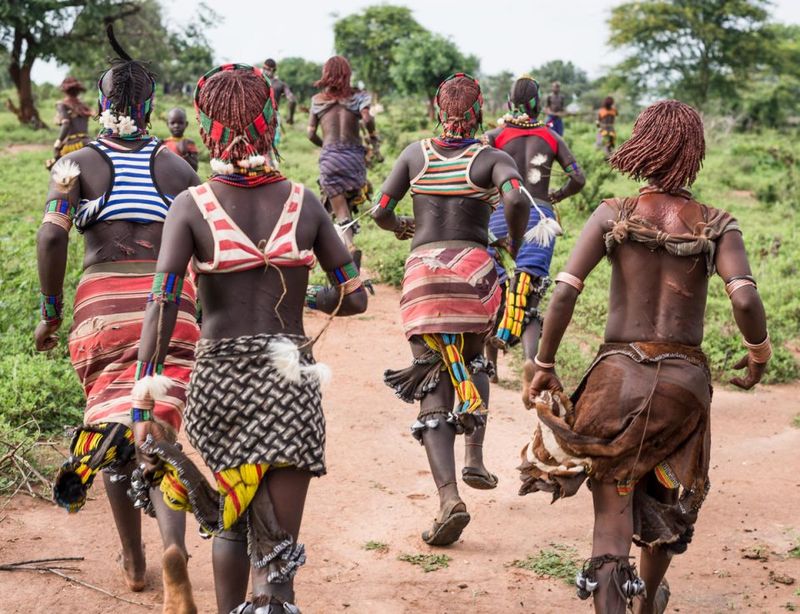 On the border of Sudan and South Sudan, there is an amazing Nuba tribe, which has family customs unusual even for Africa. At the annual dances, girls choose future husbands for themselves, but before obtaining such a status, a man must build a house for his future family. Until that time, young people can only meet secretly at night, and even the birth of a child does not give the right to the status of a legal spouse. When the housing is ready, the girl and the guy are allowed to sleep under the same roof, but in no case eat. Such a right is given to them only after a year, when the marriage will pass the test of time and will be considered official. 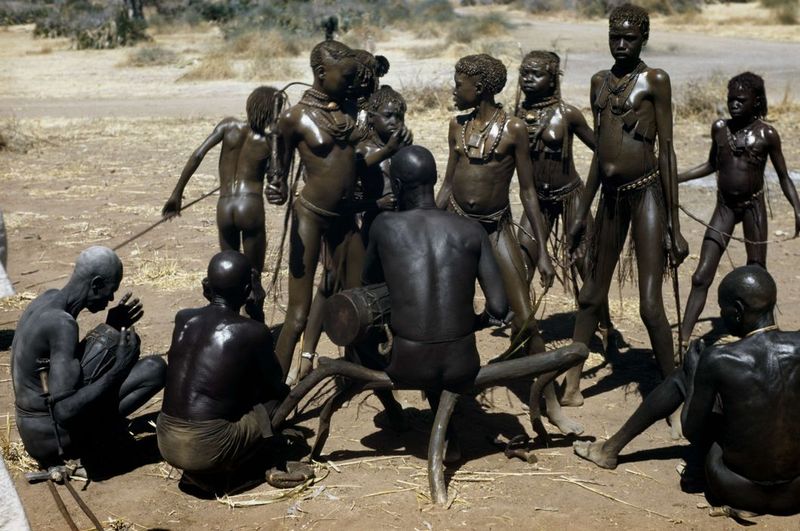 A distinctive feature of the noob for a long time was the absence of any division into classes and monetary relations. But in the 70s of the XX century. the Sudanese government began sending local men to work in the city. They returned from there in clothes and with little money, so they felt like real rich people among their fellow tribesmen, which gave rise to envy in others and contributed to the prosperity of theft. Thus, the civilization that reached the noob did them much more harm than good. But still, there are representatives among them who continue to ignore the benefits of civilization and adorn their bodies only with numerous scars, and not with clothes.

Karo is one of the small African tribes, which has no more than 1000 people. They are mainly engaged in cattle breeding, but men can spend long months hunting and even work in nearby cities. Women at this time will have to do household chores and another important craft – dressing of skins. 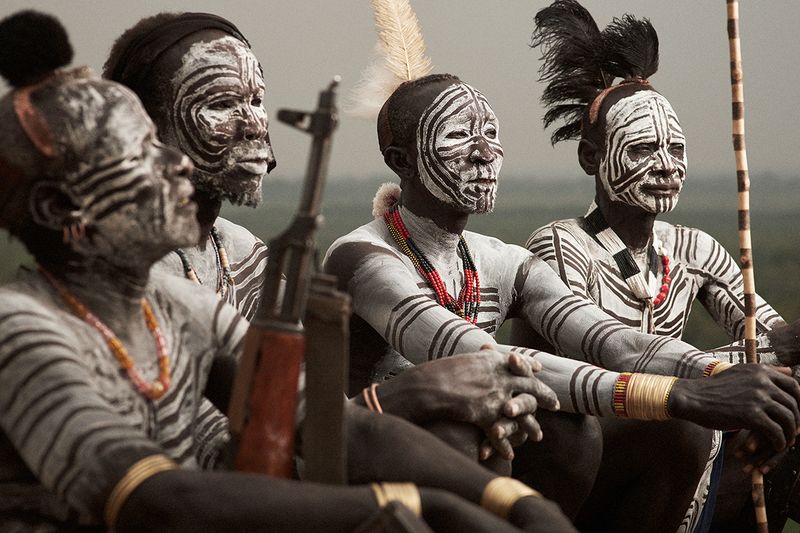 Representatives of this tribe can top the list of the most amazing craftsmen in Africa for decorating their bodies. For this purpose, they cover themselves with ornaments applied with vegetable paints, chiseled chalk or ocher, use feathers, beads, shells and even beetle elytra and corn cobs as decorations. At the same time, the male half of the population is painted much brighter, since it is important for them to have the most frightening appearance. Another notable detail in Karo men and women is the pierced lower lip, into which nails, flowers and simply dried twigs are inserted.

This is only a small part of the unusual peoples living on the territory of the African continent. Despite the global spread of the benefits of civilization, the lifestyle of most of them is fundamentally different from the life of a modern person, not to mention the outfits, traditions and a unique system of values, so each of the peoples of Africa can be considered amazing in its own way.