Amazing minerals of the planet

Dense forests and picturesque lakes, rocky mountains and winding rivers are all generous gifts of our Earth. But not all beauty is on the earth’s surface. No less amazing treasures of our planet are stored in the depths – minerals.

Mankind has been using stones since ancient times. Their indescribable diversity and beauty, created by nature itself, won the hearts of people. Back in the IV century. BC e. the ancient Greek philosopher Aristotle divided the entire surrounding world. All living beings and representatives of the plant world entered living nature, and he attributed everything else, including stones, to inanimate nature. With the accumulation of knowledge, the concept of “mineral” has significantly narrowed down. 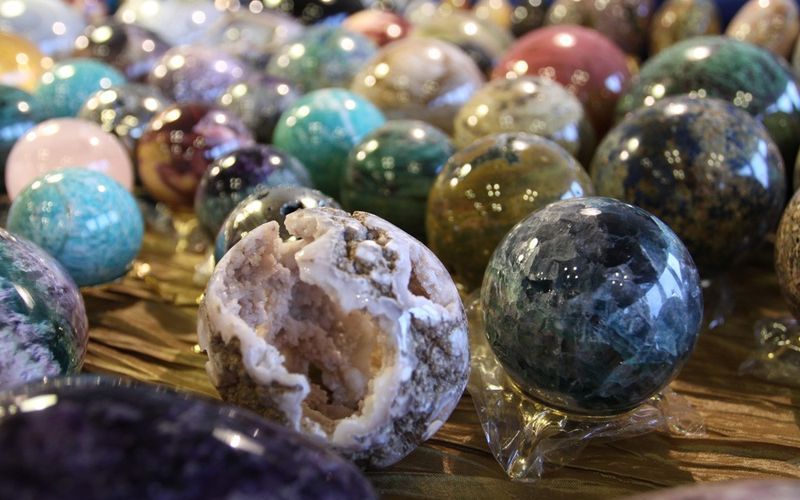 Mineral is a homogeneous substance of inorganic origin that is in a solid state and formed due to geological processes. Most have a crystalline structure and a certain chemical composition. Today, more than 6 thousand species are known, and dozens of new, previously unknown minerals are discovered every year. Moreover, as there are no two identical animals or plants in the world, so among the wide variety of minerals similar in crystal lattice and composition, no two are alike. This is due to the different physicochemical conditions of their formation, the duration of the crystallization process, as well as the influence of other substances. We will tell you about the most amazing minerals – wonderful examples of frozen natural harmony, which you can admire endlessly.

They are deservedly considered one of the finest minerals, which have a unique amorphous structure and consist of the smallest spherical particles of silica. They got the name from lat. “Oralus”, which means an enchanting gaze. Depending on the properties, a fairly large number of varieties are distinguished, which fascinate with delightful overflows of bright tones with ideal spectral purity. Gems are widely used in modern jewelry. Opals are found on all continents. 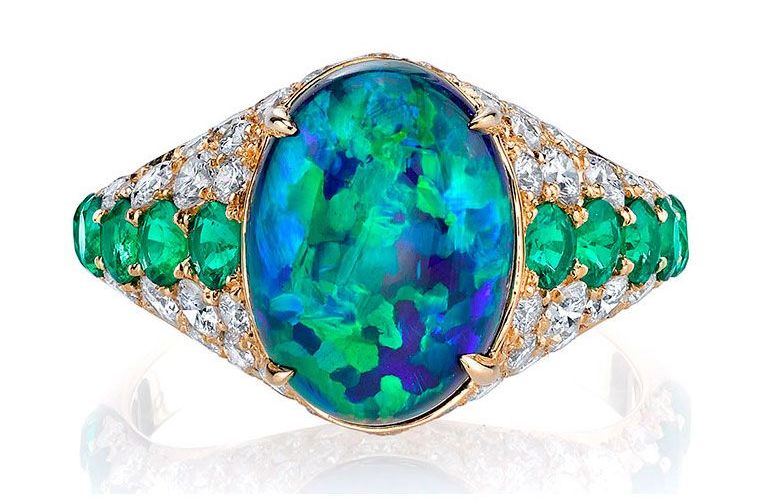 According to some reports, 97% of all opals entering the world market are mined in Australia. Moreover, the oldest mines in the world are located in the Czech Republic. In Russia, opals are found in Kamchatka.

Some species, such as blue opal “Universe” or “Ocean”, amaze with their transparency and inclusions, reminiscent of the vast world of Space or the enchanting depths of the sea. In addition, they often find true masterpieces of nature – petrified wood with opal veins harmoniously located in it. 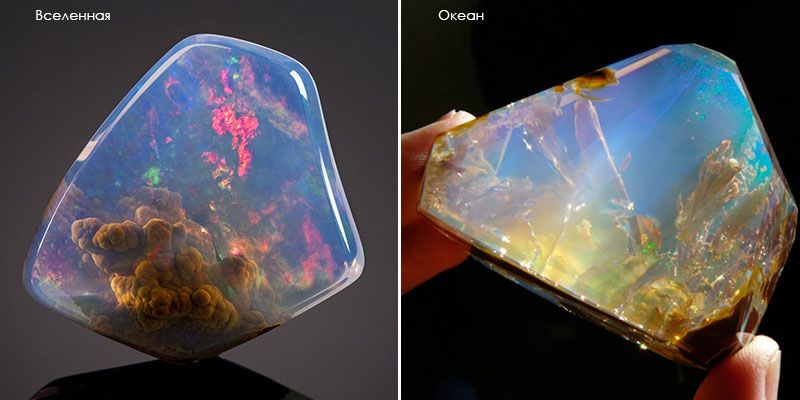 It belongs to precious stones and is the most valuable noble opal. For the first time, black opal was introduced to the world at the end of the 19th century. Despite the name, in fact, the color can be dominated by a variety of tones from dark blue to gold and red. The beauty of gems lies in the play of their colors, which are observed in the veins – multi-colored flashes sparkle like lightning in a thunderstorm.

Opal “Troy Fire” is perhaps the most famous. It was presented by Napoleon to his wife Josephine. The gem was kept in the Vienna Museum of Art, and then disappeared without a trace under mysterious circumstances.

Visually similar to black opal. It is characterized by bright blotches on a matte background. Boulder is usually found on large boulders of iron ore, found in cracks and depressions, so the thin opal layer often has an intricate shape, repeating the outlines of a crevice. 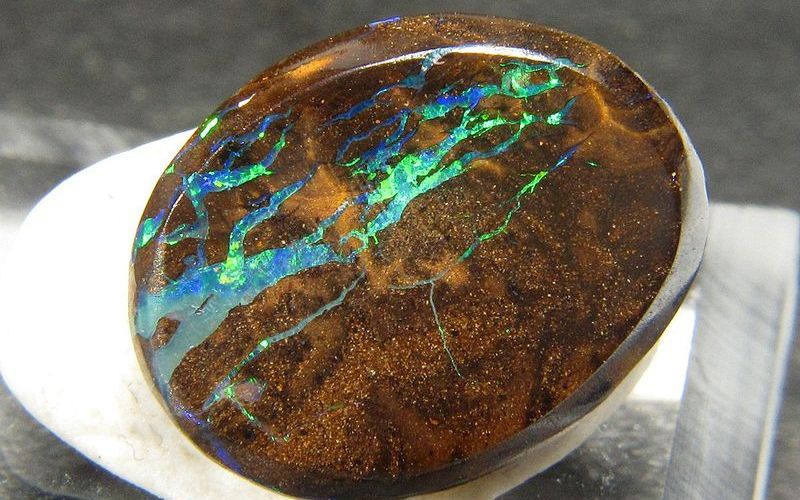 A translucent or transparent stone, the color range of which varies from deep orange-red to wine-yellow hue. You can meet it in cavities and cracks in volcanic rocks. Gem is almost the only type of opal that lends itself to cutting. 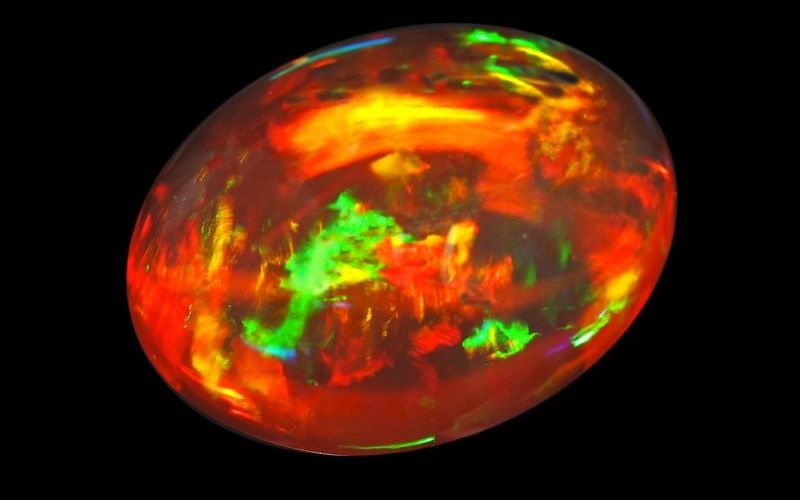 It is a popular collection mineral with a glassy luster, smooth edges and rich sky-blue and azure shades, as evidenced by its name (from the French “azur” – azure). It is formed in the near-surface oxidation zones of copper deposits. Azurite is fragile and not resistant to external factors, therefore, when weathering, it is replaced by green malachite. The largest azurite weighing 4.5 tons is kept in the New York Museum of Natural History. 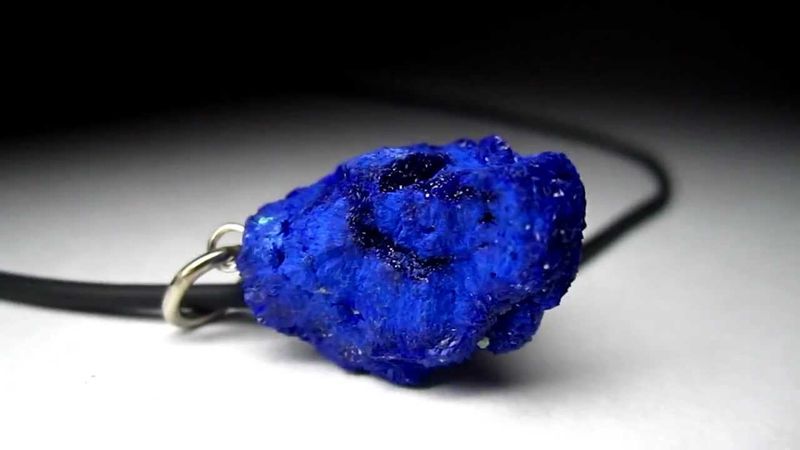 Magic crystals delight not only in appearance, but, according to some beliefs, help a person become happier.

One of the most mysterious semi-precious stones. Its magical properties were known even BC. e. ancient Egyptians and Greeks. Many legends and tales are associated with it. The name comes from ancient Greek. malakos (mallow). The mineral is a product of the weathering of copper ores and fascinates with bizarre patterns in the form of thin concentric circles, star-like placers, chaotic ribbon patterns. It also has a rich palette of colors from light turquoise to deep dark green tones. The shape is also quite varied, lamellar, needle-like, and the most common is round. 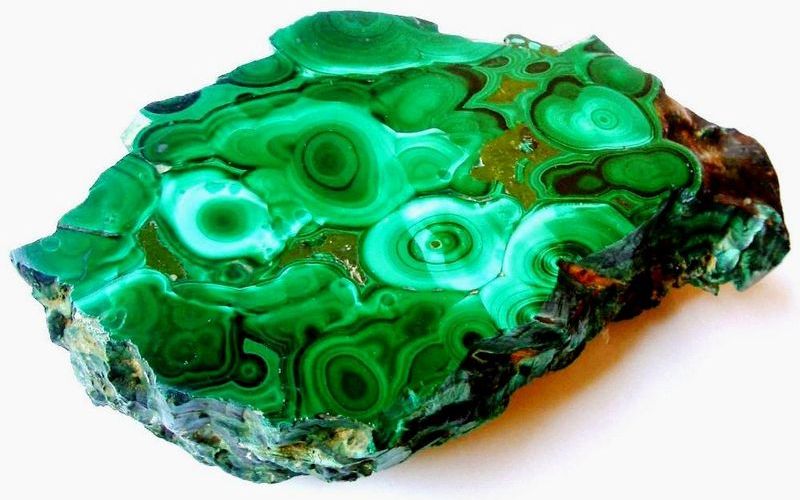 Among the varieties of malachite are distinguished:

Malachite can rightfully be called a “Russian stone”, because it was in Russia in the Urals that giant malachite deposits were discovered. The stone was very expensive, so it was the prerogative of the upper classes and was considered a symbol of wealth. Malachite craftsmen made truly amazingly beautiful jewelry filled with majestic and magical aesthetics.

This rare small crystal is named after the Englishman J. Beildon. Occurs in oxidation zones of polymetallic deposits. In most cases, it looks like mastoid crusts with a fibrous structure or dusty masses. The color ranges from apple to deep green. 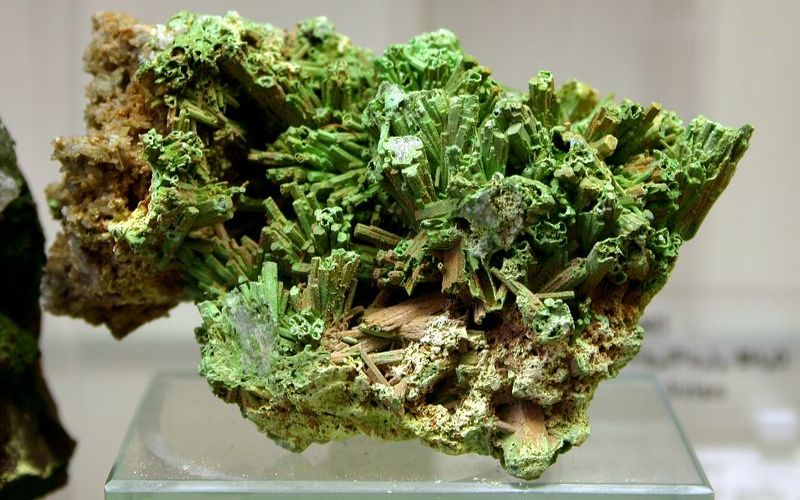 It got its name from the surname of its discoverer – the mineralogist F. Wolfen, who in the middle of the 19th century. discovered unusual deposits of “yellow ore” in Australia. This translucent crystal can have orange, olive, yellow, silver, brown colors with a beautiful sheen. Finding a suitable wulfenite for cutting is difficult, since it is very fragile. Although, due to the high content of lead, it is not recommended to use it for making body jewelry. At the same time, wulfenite intergrowths of lamellar crystals that form interweaving of stone petals are popular among lovers of stones. 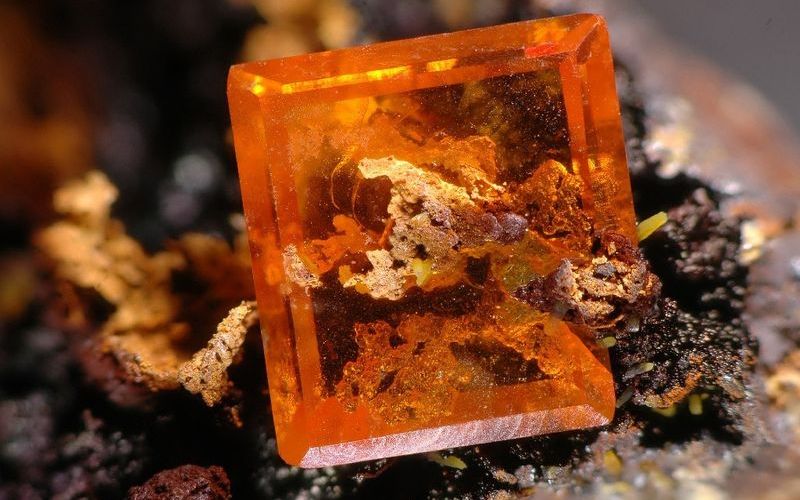 It is a rare copper mineral that derives its name from two words of Greek origin: “klineis” meaning “tilt” and “klas” meaning “splitting”. It was first discovered in the 30s. XIX Art. in an old English mine. It has the appearance of elongated tabular, prismatic or rhombic crystals, which in most cases form rosettes and fan-shaped intergrowths. The color is a pleasant bluish blue with a greenish tint. When you change the angle of view on a crystal under the same lighting, it changes the color range from bluish to dark green. Surprisingly, this exquisite mineral, when heated, begins to give off a bright garlic smell. On Russian territory, it occurs near Nizhny Tagil. 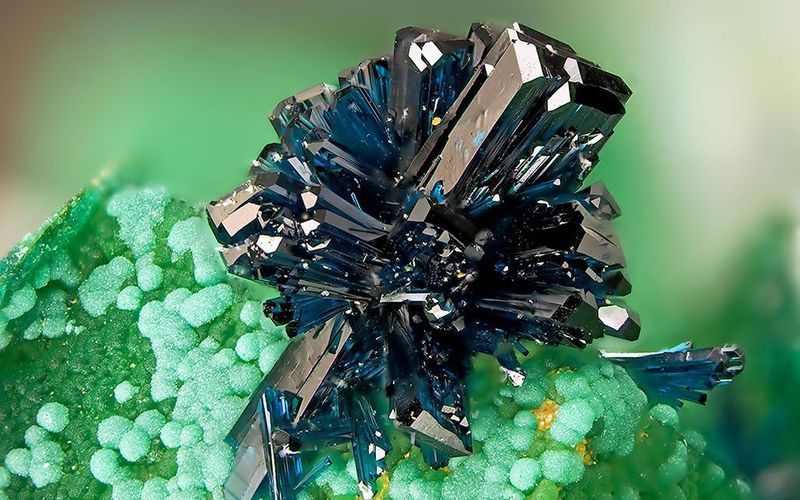 The mineral is golden in color with a metallic luster and is visually very similar to gold. The crystal has a cuboid shape with often mirrored, perfectly smooth edges. It has been used to make jewelry since the days of Ancient Egypt. The name “pyrites lithos” from the Greek. means “stone that carves fire.” Indeed, when struck, pyrite strikes sparks, so a person used it as a flint. Although it is called in another way – “the gold of fools”, as illiterate gold miners very often mistook it for a noble metal. 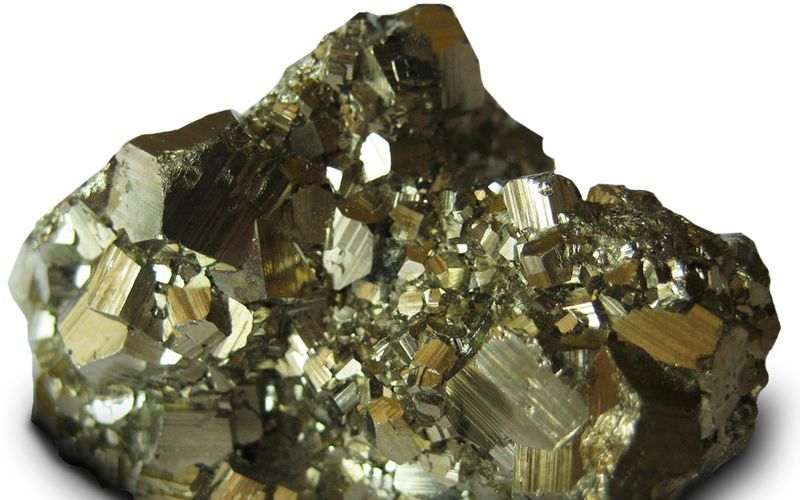 The most beautiful representative of the zeolite group. Under natural conditions, it is mainly found in the form of druses, which are composed of long needle-like crystals. Thin prisms and fragile needles, like rays of light, diverge from a common center. The color is white or colorless, although it can also have a greenish, yellowish or pink tint. Due to its unique properties – to twist and wriggle under the influence of fire, the crystal was named “skoles”, which means “worm” in Greek. 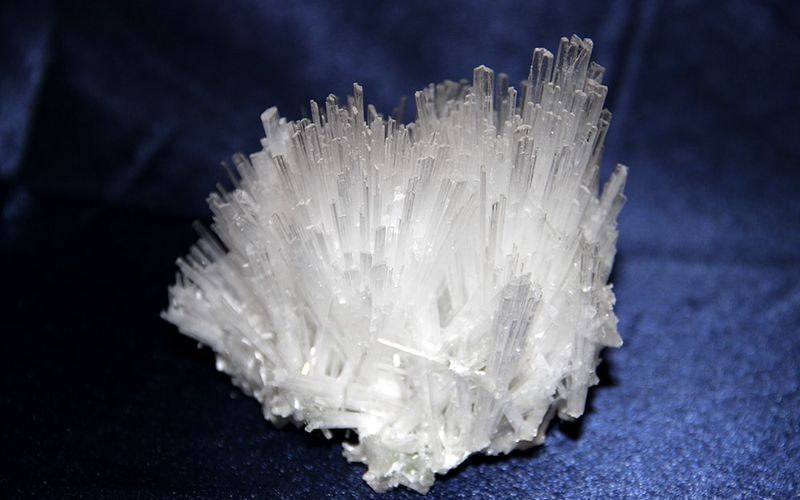 The many-sided mineral, the name of which comes from the word “turamali”, which the local residents of Sri Lanka, where its most famous deposits are located, means “precious stone”. Tourmaline can become electrified when heated. Crystals usually have a prismatic elongated shape, but there are several dozen color varieties.

The color of tourmalines depends on the chemical composition, and some can be painted in several colors at once. The polychrome ones are incredibly good and resemble a sparkling piece of a rainbow. 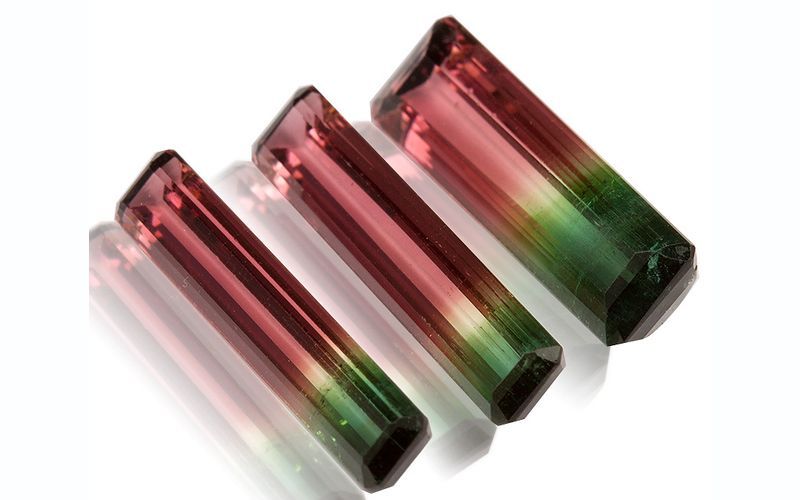 One of the most interesting species – Paraiba tourmaline is mined in Brazil and is characterized by a neon glow of cold tones from the color of the spring sky to a rich emerald. It was found relatively recently, about 30 years ago, but immediately gained recognition in the world jewelry market. And every year its value is growing rapidly.

This is the “Ural emerald” – the rarest transparent mineral with a beautiful glassy luster from the pomegranate family. Discovered in the 19th century. on the territory of the Saranovskoye field on the western slope of the Urals and is named after Count S. Uvarov. In nature, a crystal originates in rocks rich in iron and manganese. The found samples are very modest in size up to 3 mm in diameter, although there are also larger uvarovites suitable for faceting. Catherine the Great wore exquisite emerald green crystal jewelry with pleasure. 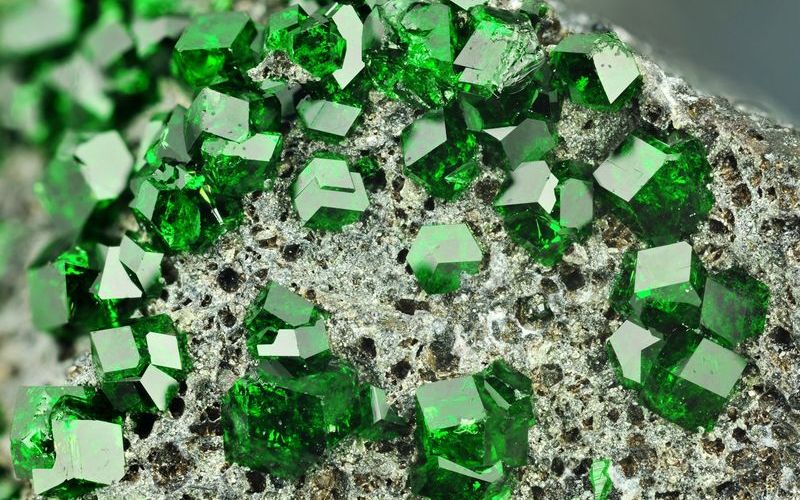 It has been known for over five centuries. The formation of a crystal of the original cubic shape is associated with hydrothermal ore veins, limestones, and also dolomites. There is probably no mineral on the planet that has such a wide color spectrum. Pure fluorite is colorless, but such specimens are very rare in nature. Various impurities of Cl, Fe and other elements give the crystal a wide range of shades: pink, yellow, blue, violet, all tones of green. In the dark, the stone emits a light glow. It is used to make lenses. The largest deposits in the Russian Federation are found in Transbaikalia. 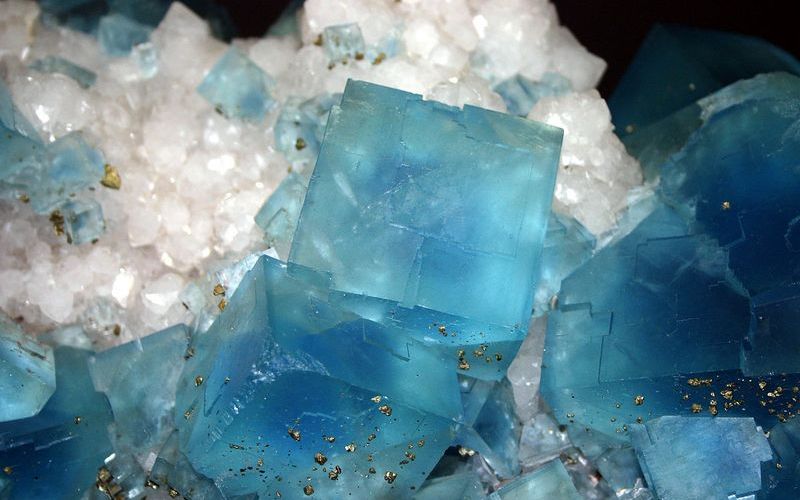 Sometimes, new mineral species are found in meteorites that have fallen from the sky. So, in the Krasnoyarsk Territory in the middle of the 18th century. local residents found a meteorite – pallasite, of extraterrestrial origin. It was an iron-nickel base interspersed with olivine crystals.

It is a deep-seated high-temperature mineral that is found all over the world in placers of destroyed rocks and in volcanic formations. The color depends on the depth of penetration of impurities and varies from golden to green-brown tone. Amazing beaches of green olivine sand are formed by the destruction of volcanoes by the surf. It is also common in pallasite meteorites, which have become coveted exhibits for collectors, despite the astronomical price of up to $ 40,000 per kg. It is believed that olivine is filled with the energy of the entire universe and brings good luck to its owner in all endeavors. 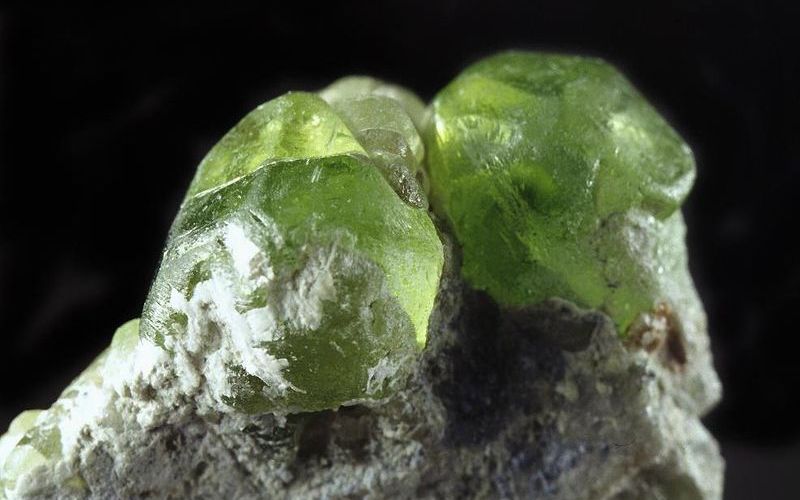