One significant element of the heritage of each era is architectural works, among which many buildings and structures stand out for their special design or ingenious constructive solutions. Amazing construction projects of our time are becoming the embodiment of super-progressive technologies, and the main focus of architecture has become autonomy, energy efficiency, environmental friendliness and avant-garde design. The implementation of advanced technologies in construction has always been hampered by the high cost. At the same time, there have always been bold architects and investors who are revolutionizing architecture and presenting amazing buildings to the world. 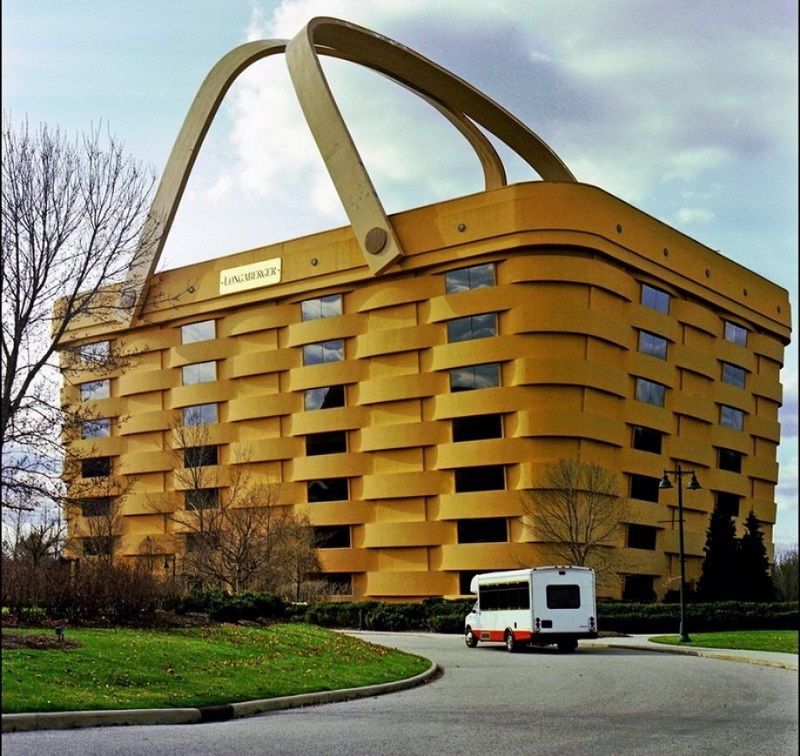 The Ostankino Tower is an amazing structure, the design of which has no analogues around the world. At a height of 540.1 m, its foundation lies only 4.6 m, and the top swings within 12 m.The main feature of the structure is an unusual solution – to reinforce the tower barrel with 149 strained steel ropes that squeeze the structure, turning it into a kind of giant spring.

Today the Ostankino tower ranks 10th in height among free-standing structures, but after the completion of construction, its height was a record for 9 years. The construction of the structure began in 1960 and lasted for 8 years. Although construction work after the commissioning of the object was carried out for another year. 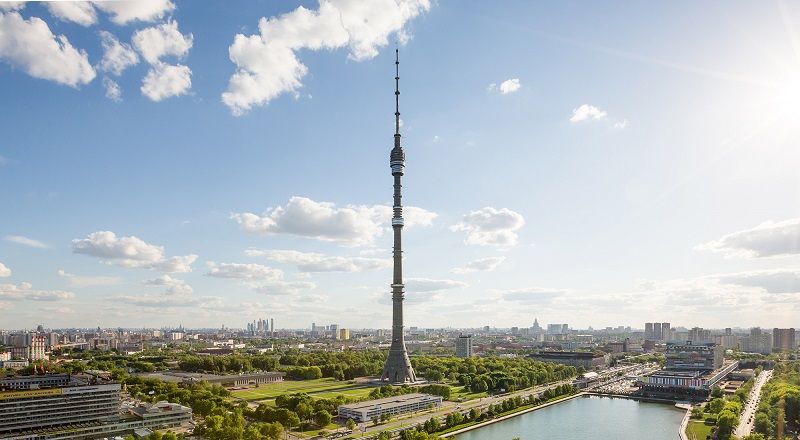 The history of the tower’s design was not so simple and had unexpected twists and turns. Initially, in 1955, an all-Union competition was announced, in which the Kiev Design Institute won. Nevertheless, immediately after the presentation of the project, leading Soviet engineers noticed the similarity of the proposed version with the Eiffel Tower. As a result, interest in the project was lost without arousing enthusiasm in the highest government circles.

An unexpected turn was the proposal of the engineer Nikitin, who proposed to build a tower of concrete. As Nikitin himself said, the idea came to him in a dream in the form of a lily turned upside down by a stem. They listened to his opinion and gave him the opportunity to submit his own application. Nikitin prepared the first foresketch and the concept of the structure in one night. As a basis for the preparation of the project, the unrealized developments of thin-walled concrete structures by Kondratyuk and the popular Italian engineer Luigi were taken. 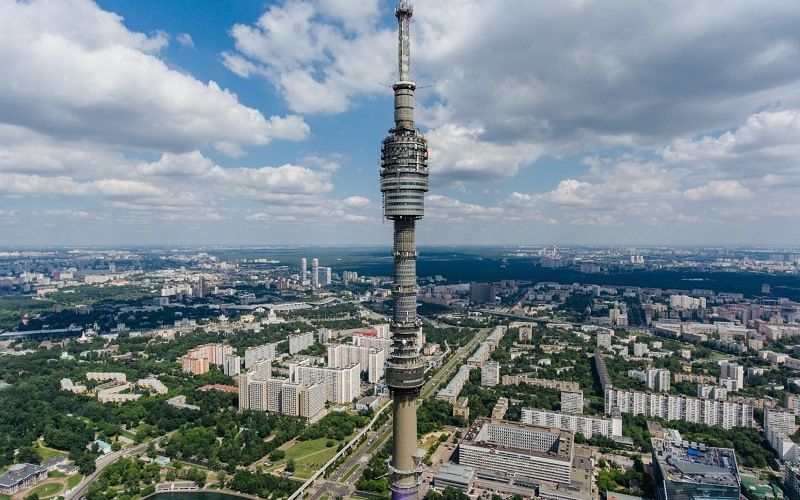 The construction of the Ostankino tower began even before the approval of the drawings, but was suddenly stopped, as the project raised doubts about the stability of the structure. In the course of revision and consultation of the German engineer F. Leonardt, the number of supports was increased from 4 to 10. The depth of the foundation was also increased from 3.5 to 4.6 m, and the width of the base – by 1.5 m. As a result, the tower appeared in this form. where she is today. Now everyone has the opportunity to visit the Seventh Heaven restaurant and admire the views of Moscow from the observation deck located at an altitude of 340 m.

This direction implies structures that can move and change shape. The concept itself is not a novelty – drawbridges, which were built in the Middle Ages, became the first representatives of kinetic architecture. Today the direction has acquired a new round of development, being embodied in “smart” buildings with a touch of avant-garde. 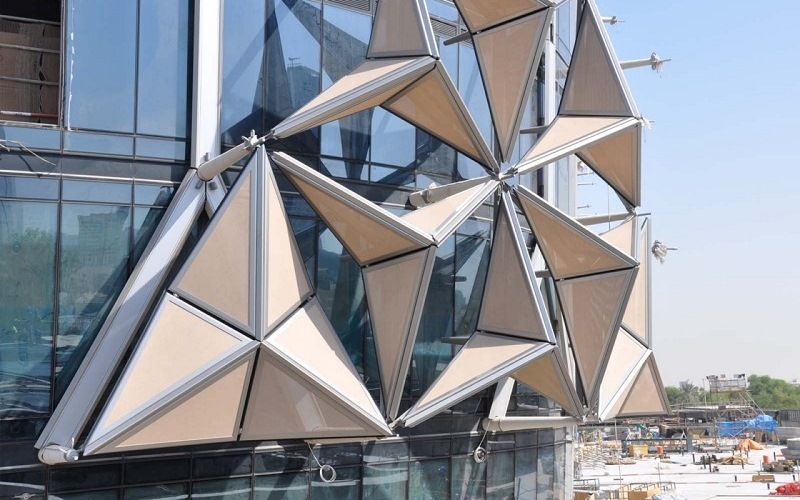 The idea of ​​movable structures was first presented at the beginning of the 20th century in a book by the Soviet architect Y. Chernikhov. The book “Architectural Fantasies” included 101 compositions of a theoretical nature. For the first time, a full-fledged project was developed in the late 1920s. architect V. Tatlin. The famous Tatlin Tower was conceived as a monument to the III International and was a 7-storey revolving building with offices for members of the Comintern. The project was never implemented, being embodied only in a 4-meter layout and a significant impetus for a new direction.

With the development of technology, the idea of ​​kinetic structures became more real and began to be of interest not only in terms of avant-garde, but also in the use of natural energy sources – wind, water and light. The mechanical movement of building elements began to be used to rotate solar panels, shutters and even entire building modules. If we approach the idea from the side of street decor, then sometimes the illusion of change is enough, which the architect R. Ley embodied in his project.

Sidney and Lois Eskenazi Hospital is located in Indianapolis, Indiana, USA. The peculiarity of the building is that it constantly changes its appearance depending on the position of the observer. The interactive facade is made without the use of electronics, and is based on lenticular photographs. 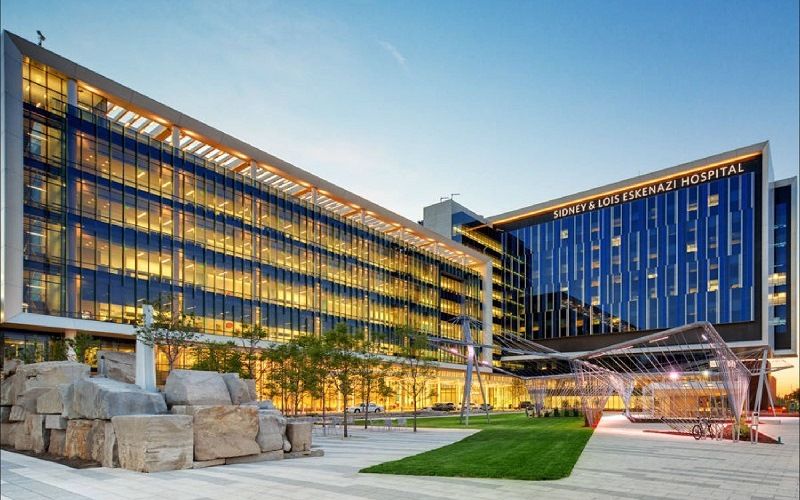 Seven thousand aluminum panels in yellow and blue are positioned on the front facade in such a way that the shades change as people pass by. Thanks to the optical effect, passers-by observe a “live” picture that changes the image. First, it is a stadium with fans, then an abstraction and again a picture, but this time of floating clouds.

Wembley Stadium, which opened in London in 2007, is the epitome of kinetic architecture in the truest sense of the word. The huge space turns into an open stadium in less than 2 minutes, and if it rains during a football match, the retractable roof again covers the sports complex.

The stadium is on the 2nd place in Europe in terms of capacity and is capable of accommodating 90 thousand spectators.

Its sliding roof, when open, forms a giant single-span arch with a height of 134 meters, which is comparable to a 48-storey building. The authors of the project are the British architectural bureau Foster and Partners and the US company Populous. 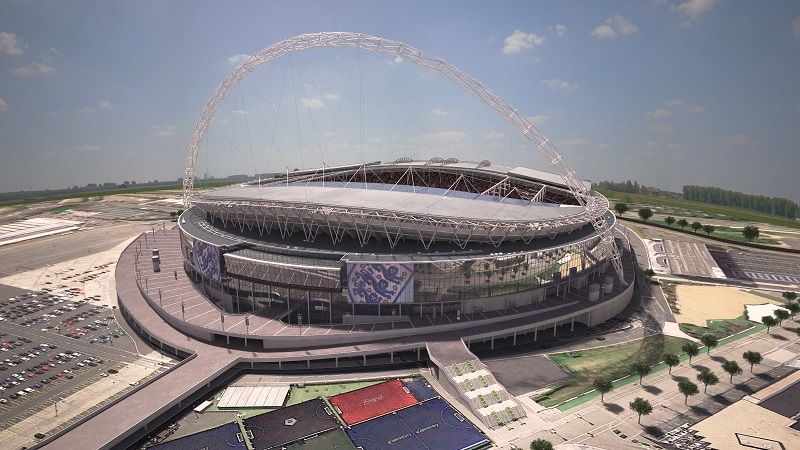 It is also worth mentioning the German multifunctional stadium Veltins Arena. His football field moves to the street in 4 hours, passing under the stands. Thus, the grass on the field does not need artificial lighting, and the stadium premises without a football field are used for various events.

Many architects consider glass architecture to be the architecture of the future, while many fans of brutalism prefer stone and massive rough forms. It seems impossible to combine such opposing styles, but kinetics works wonders. 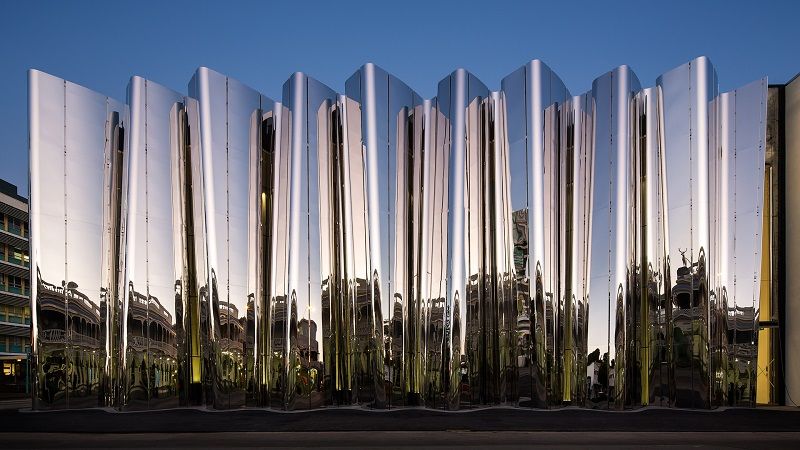 In India, a 2-story house was completed in early 2018, resembling a windowless concrete box with a marble façade on the front. The structure looks more like a bunker or defensive fortification. In this case, the front plates are movable. Six marble slabs on each floor slide to the sides, overlapping and revealing a graceful glass façade. At the same time, the shifted slabs form walls, between which a terrace is formed.

The amazing structures of the world of the French architect J. Nouvel amaze the imagination not only with their unusual forms. The buildings themselves regulate the natural light inside the rooms by controlling the screen elements of the facade.

One of these buildings was the campus of the University of Southern Denmark in Colling. The glazed façade is covered by 1,600 automatically controlled triangular elements. The shutters, made of perforated sheet steel, open according to the light. The elements are driven by electric drives, which are controlled by controllers with light sensors. 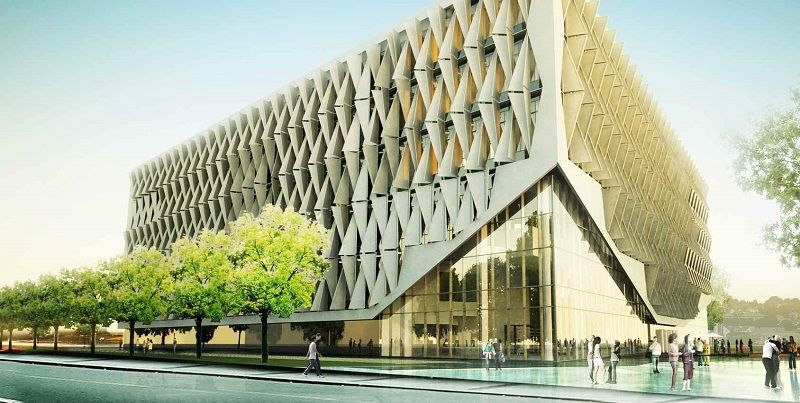 The structure is a real work of modern design, and the unusual insolation carries both artistic and functional load. In general, the campus building harmoniously fits into the system of the ecological territory of the park with abundant landscaping and a reservoir.

The most amazing buildings are still unrealized due to technical difficulties and too high cost. But still, we can say with confidence that humanity is on the verge of an architectural revolution. There are already ready-made projects that can turn the well-established idea of ​​motionless houses in the mind. The implementation of these projects is a matter of time, and interest in them is growing every day.

Daring British architects D. Grünberg and D. Wolsfson became innovators in this area. By order of a Chinese engineering company, a project was developed for the dynamic house and administrative building of the company’s headquarters. Buildings can change shape by rotating each tier (floor). 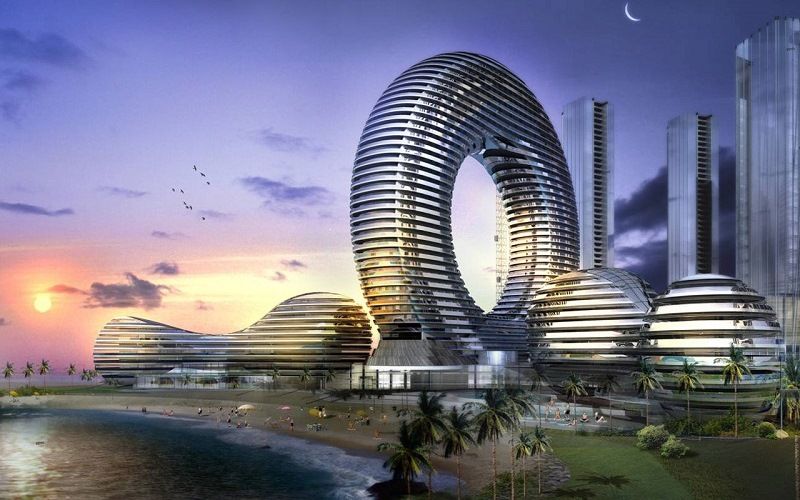 A similar project for a reshaping 59-story skyscraper was created by the Italian company Dynamic Architecture. Vertical turbines are integrated into the building, which are driven by air currents and generate electricity to rotate the floors of the building. So far, the oil sheikhs from Dubai, for whom the project was created, are in no hurry to invest in construction, but at world exhibitions the presentation of this project causes the most lively disputes and discussions.

D. Fischer’s project presented in Dubai in 2008 also remains on paper. The 400 m high skyscraper will rotate 180 ° per day. The basic structure of the skyscraper is represented by separate tiers of floors hung on the central trunk of the building. The floors do not rest on each other, so each floor can be rotated independently. So far, 3-D visualization in video format allows you to see such buildings. The spectacle is spectacular and fantastic. The video contains various angles and a view from the inside, showing a changing panorama in the windows during rotation.

As long as the movable skyscrapers of the future remain in perspective, the amazing buildings of the world can be found in private construction. Lovely houses made of wood, winding a feeling of warmth and coziness, have become a trend in the stylistic direction of Live edge. A distinctive feature of such buildings is natural lines and minimal changes in natural forms. In addition, eco-style is expressed in the use of building material – firewood. What was previously considered waste during the processing of construction wood and was used exclusively as fuel has now become a promising building material.

Firewood is used as a wall material in the construction of 1-2-storey houses, laying them across the axis of the wall. A natural fossil, clay, is also used as a binder. Before laying each subsequent row, the clay is applied in two longitudinal rows, and the gap is covered with wood chips. The thickness of the wall directly depends on the length of the logs, which have various sectional shapes and thicknesses. In terms of sound insulation and heat engineering properties, wood walls are not inferior to gas blocks and surpass them in strength.

Firewood houses have a special natural aesthetics, which won the sympathy of many fans of extraordinary architecture. With accurate cutting of logs with the same length and neat laying strictly along the line, the wall turns out to be flat and even does not require facing from the inside.

A real or biofireplace fits perfectly into the interior of such a house, but in this case, for fire safety purposes, the firewood is processed with antipyrine. Electrical wiring can be done in retro style – twisted cords on insulators. The laying of communications should be hidden under the floor, and windows and doors must be made of wood. In many respects, including aesthetic, firewood houses are comparable to a traditional log house. Moreover, their construction is much cheaper and easier from the technical point of view.

Today, a variety of styles and images flourish in the world of architecture. There is an opportunity to use super technologies and preserve traditions, combine opposites and merge with nature, use natural energy and preserve ecobalance. Perhaps very soon a person will be able to live in complete harmony with nature, enjoying its beauty even in a metropolis.