Africa is a huge continent that keeps an endless number of secrets and mysteries. In the African expanses, you can find savannas, mountains, eternally thirsty for rain deserts and forests, where rainfall every day, woodlands and evergreen stiff-leaved shrubs. Such an abundance of natural areas is home to a huge number of amazing representatives of the fauna that inhabit this continent.

Here you can find giant and the smallest animals, which, nevertheless, can be more dangerous than any giant. The unquenchable interest in the wildlife of Africa cannot be satisfied by the numerous travelers who go here every year, but those who are not yet ready to make such a trip can get acquainted with the amazing African fauna in more detail on the Internet.

The local population calls these animals the wood elves, because they look extremely cute and funny. These small animals have an elongated proboscis-nose, which is very mobile, like the ears of the jumpers. The movements of these parts of the body in an animal perform the same function as facial expressions in humans. 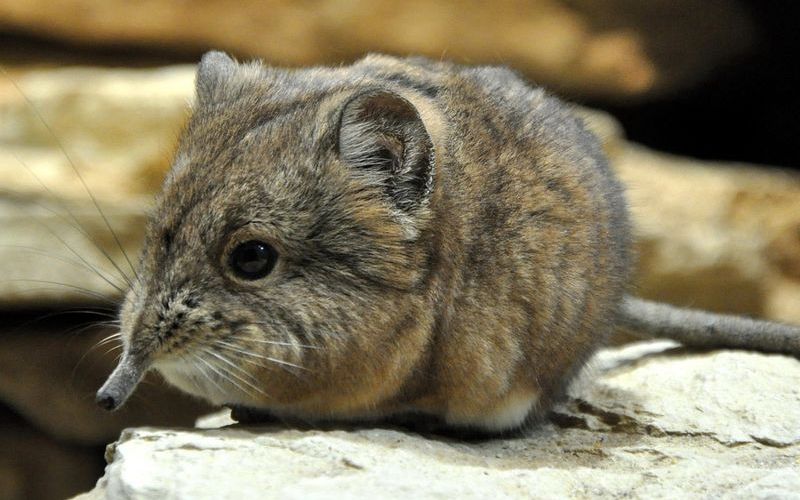 It is very difficult to examine the jumpers in detail, since they move extremely quickly. Among small mammals, they are considered the fastest, as they reach speeds of almost 30 km / h! With a size of 10 to 20 cm, this pace can be considered lightning fast. Surprisingly, jumpers move both on all four and only on two legs, but on four it turns out much faster.

The front legs, which are much shorter than the hind ones, are arranged in such a way that the animal can successfully dig holes in solid ground. Despite this ability, he is not very willing to do it, preferring to occupy other people’s empty dwellings, where he lives alone or with a couple.

The jumpers’ coat is very thick and perfectly protects from the cold at night, but during the day they suffer from heat, preferring to hide in the shade of trees and bushes. The heat of Africa is poorly tolerated by them, and from heatstroke they can even fall unconscious.

This amazing animal is one of the visiting cards of Africa. Running herds of giraffe gazelles look mesmerizing, so they can be seen in almost all programs about this continent.

They are interesting because most of their lives are spent on two legs. Such graceful steps are possible due to the special structure of the pelvic part of the skeleton, which allows giraffe gazelles to balance on their hind legs for a long time. This unusual adaptation for cloven-hoofed animals appeared in the process of evolution, allowing them to eat leaves from trees at a height that is achievable only for giraffes. 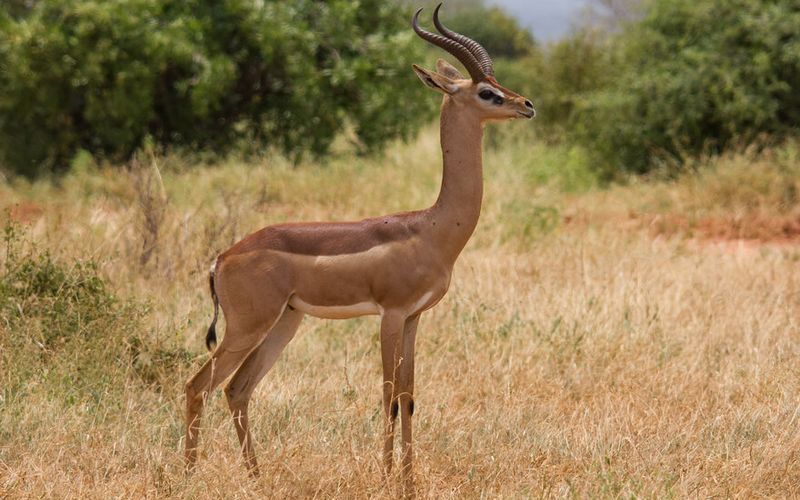 Another useful device is a small head that easily penetrates between acacia thorns in the desire to reach the juicy leaves and branches. Due to the fact that the giraffe gazelle has to eat thorny trees with thorns, its tongue is very hard: it is impossible to pierce it with a thorn.

The head of the males is crowned with thin horns, which are already somewhat the subject of desire of many collectors who come on safari to the savannah. This put the species on the brink of extinction. In the early 2000s, there were less than 70,000 giraffe gazelles in the world, and the number continues to decline daily, despite the fact that it has long been listed in the international Red Book.

A person who has seen this bird at least once will never forget it: a huge beak that seems to be carved out of stone, and eyes full of dignity and tranquility. The whale glider lives mainly in swamps in tropical regions of Africa; it can stand motionless in a swampy area for several hours, which contributes to the appearance of many beautiful photographs in which the bird is captured in its natural habitat.

When the whale head gets tired of standing in one position, he can walk through the swamp, or even fly a decent distance, although this seems incredible, looking at its impressive size: only the wingspan is more than 2.5 m. Males are usually larger than females. and can grow up to 1.55 cm. 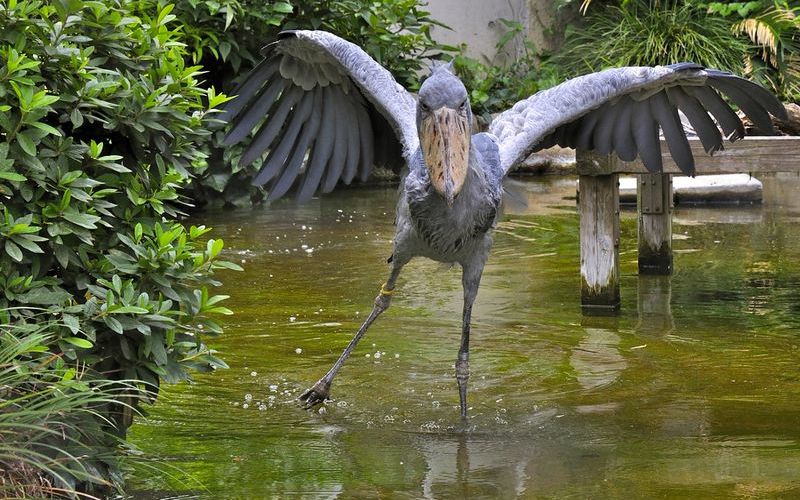 To feed himself, the whale head often has to eat. The diet consists mainly of aquatic animals: fish, frogs, snakes, and sometimes even small crocodiles. This bird is very friendly, which cannot be said by looking at its appearance. In addition, the animal gets along well with people, therefore, in its homeland, it is often tamed by families living near its habitats.

These amazing animals living in Africa remind someone of rodents, and someone finds that their eyes are very similar to bats. In fact, galagos belong to primates, they just have a very small size – up to 30 cm. Their characteristic feature is special sounds, exactly reminiscent of the crying of a baby. This repeatedly forced tourists to climb into the bushes, from where they can hear such crying in order to save the thrown child, but from there only huge galago eyes look at them.

The ears of the animals are completely unique: while moving through thorny bushes, the animal can fold them into a thin tube so as not to damage it with thorns. Since the period of activity of this primate falls at night, it rests during the day. To prevent extraneous daytime noises from disturbing sleep, the galago closes the ear canals with ears, which in this case act as beaters. During periods of extreme heat, the ears can dry out and be damaged. To prevent this, the little omen gently moistens them with the moisture that is always at hand (or rather, under the foot) – its own urine. 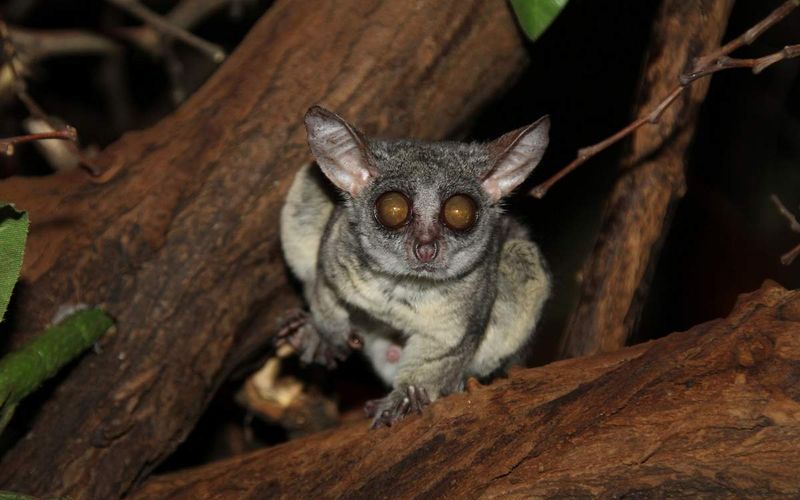 After the appearance of the babies, the galago mother transfers her cubs directly to her mouth, which already has 2 languages ​​in it: one is longer (with the help of it the animal eats insects and plants), and the second is shorter, in order to publish the same “Crying” sounds, telling relatives of a possible danger.

This bird, inhabiting Africa, is the heaviest on Earth. Due to its heavy weight, the African ostrich is not able to rise even a couple of centimeters into the air.

These birds have no teeth, therefore, to grind food in the stomach, they absorb small pebbles or any other solid objects that will grind all the food. If there are a lot of locusts around, then ostriches can gain excess weight, which will prevent them from developing tremendous speed while running, for which they are considered excellent sprinters.

Bird watchers observing African ostriches in nature say that these birds sleep while sitting with their necks raised up. But when sleep gets deep, they drop their heads down, just like sleepy people who ride the bus to work, which looks extremely funny. 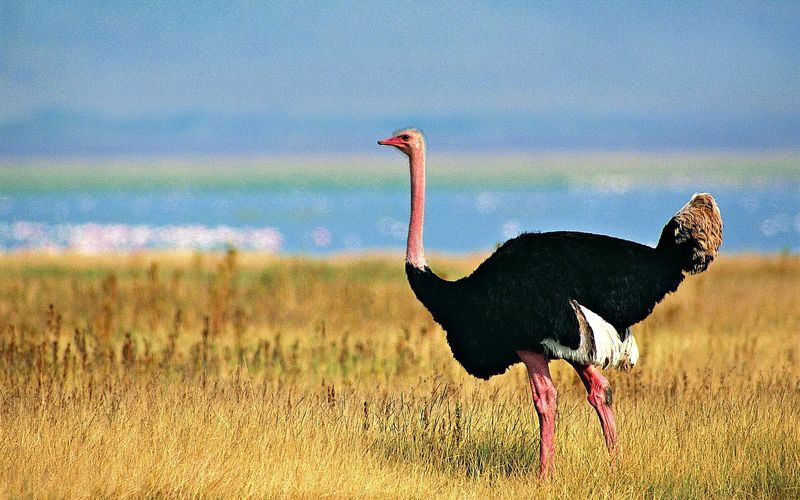 The males of the African ostrich are wonderful fathers who are very responsible for their parental mission. First, the ostrich equips a nest in the ground – a hole, in which it anxiously monitors the order, daily cleaning out all the trash and grass that got inside. After the female lays eggs, he incubates them in a disciplined manner at night when the couple is resting.

After the chicks hatch, he vigilantly monitors their safety. If a predator appears nearby that threatens the lives of the kids, the father pretends to be sick or injured. It affects the weak, falls to the ground and moves slowly, leading the enemy away with it, while the chicks hide in a safe place.

Okapi’s only habitat is the Congo River Basin. This amazing animal resembles a horse, a giraffe and a zebra at the same time. Fancy coloring makes it very bright and noticeable against the background of greenery. Maybe that’s why the species is on the verge of extinction.

Males differ from females by the presence of small horns on their foreheads, which they never use, as they are very shy and fearful creatures. The tongues of these animals are amazing: not only are they dark blue, like that of the Chow Chow, but also so long that the okapi can easily lick their eyes with them. These animals need such a long tongue in order to reach the leaves growing on the lower branches of trees. 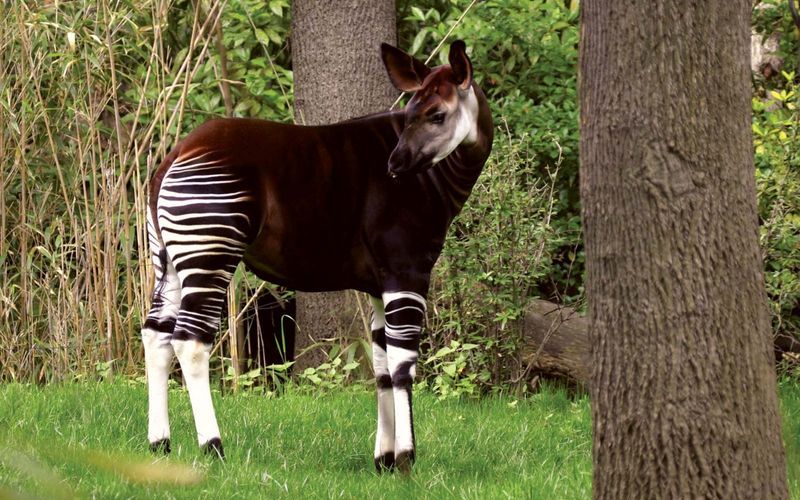 It is very difficult to meet okapi in a zoo or in captivity, because they do not tolerate fishing and moving to a new environment. For this reason, they live in only 20 nurseries in the world, and it is impossible to artificially restore their numbers.

The main feature of the crowned crane, which makes it very noticeable and beautiful, is the crest on its head, consisting of golden feathers. When the sun’s rays hit them, the crest turns into a sparkling glow overhead.

The life span of these birds is 50 years. In zoos, with good care, they can live 60 or even 65 years. Their body looks very massive, but most of the volume is occupied by feathers, so the weight of the crowned crane is only 3-5 kg. They live near rivers or swamps, where there is enough food not only for them, but also for their offspring, and sometimes they arrange nests right on the water. 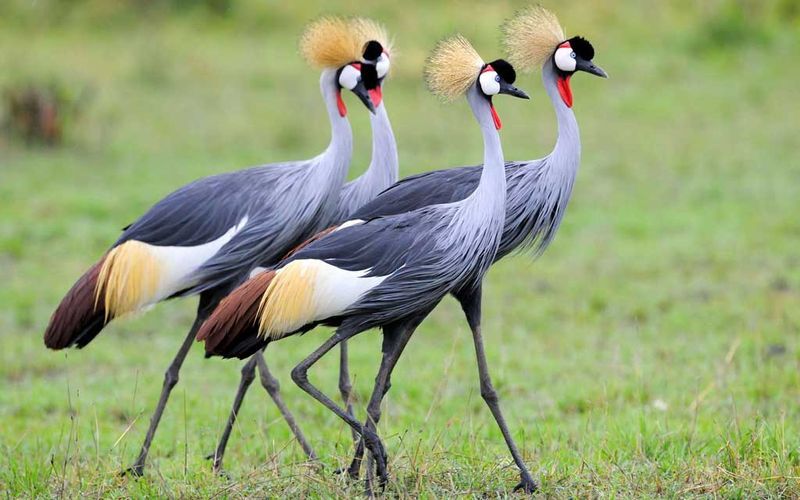 Despite their large size, crowned cranes fly excellently: at a time they are able to fly several tens of kilometers, rising into the sky for 10 km, at the height of air routes of aircraft. Although these birds are protected, this does not stop the hunters in any way. For the local population, they become easy prey that can be eaten. Most of the specimens suffer and die when they are caught and transported to zoos, since any zoo in the world wants to get such a beautiful representative that attracts everyone’s attention.

When looking at these animals, one recalls prehistoric pictures of the Earth, inhabited by huge dinosaurs. The appearance of the girdle-tail is extremely exotic not only for the middle lane, but also for Africa itself. On the dorsal, caudal and lateral surfaces there are solid spines that make it different from all other lizards. The size of these reptiles can vary from 17 to 70 cm.

The belt-tail differs from the whole world of lizards in that it does not lay eggs, like any other reptile, but gives birth to live babies. Immediately after birth, they are fully formed and can lead an independent life. 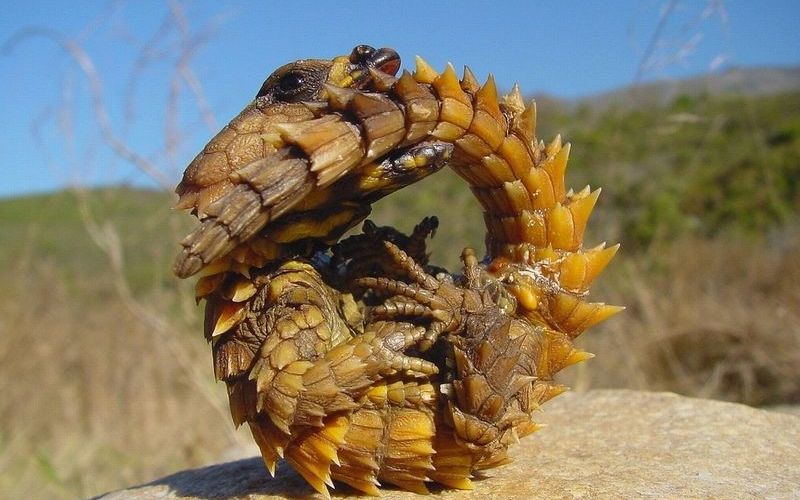 These creatures feel great in the heat, so the desert becomes their home most often. Animals live in large groups of 40-60 individuals and look very impressive together. The scales on the body serve them in moments of danger: being frightened, the belt-tail curls up into a ring, grabbing its tail with its teeth. In this case, all the bristles turn around to the predator with thorns, and the lizard cannot be eaten. Thus, the most delicate and vulnerable part of the body – the abdomen – remains reliably protected.

In the cold season, some members of this species can hibernate until the ground and air warm up to a comfortable temperature. After that, they gradually come out of the state of suspended animation and continue their active life.

In Africa, there are enough cute and scary animals, there are surprisingly good-natured ones, and there are aggressive predators. This continent is a whole world in which every lover of nature will meet many new and unusual representatives of the fauna. Scientists compare Africa to the depths of the world’s oceans, which still hold a lot of interesting discoveries for those who want to learn something new about the planet.