In order to describe all the frogs and toads that live on the American continents (in South and North America), a multivolume edition is required. Representatives of tailless amphibians are striking in their number and variety. Some of them live all over the world, others are exclusively “American” registered. Let’s get to know the main frog families and their most amazing representatives.

Representatives of this genus got their name for the sharp outgrowths above the eyes. These horns give animals the weirdest look. The color can be varied, often the color scheme, for example, black-brown or red-brown, becomes an ideal disguise. A frozen individual is not immediately identifiable as a living creature. In America there are:

An Amazonian slingshot found in the Amazonian basin. 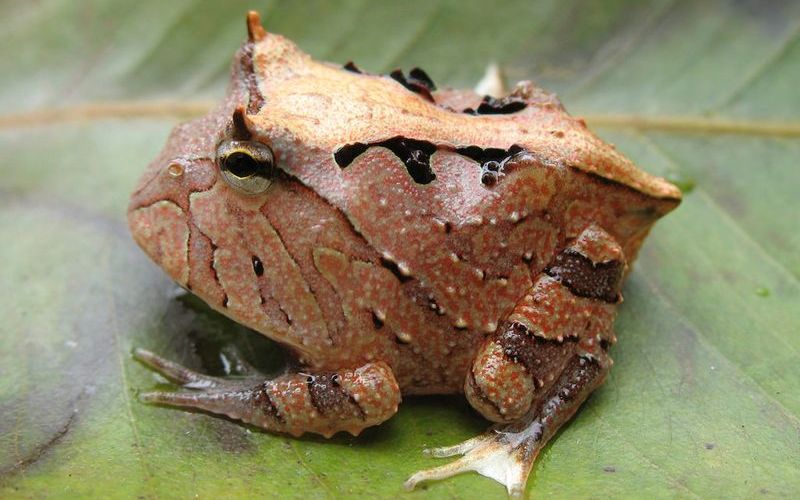 Decorated, as the name implies, on the skin of the amphibian “cheerful” ornament. 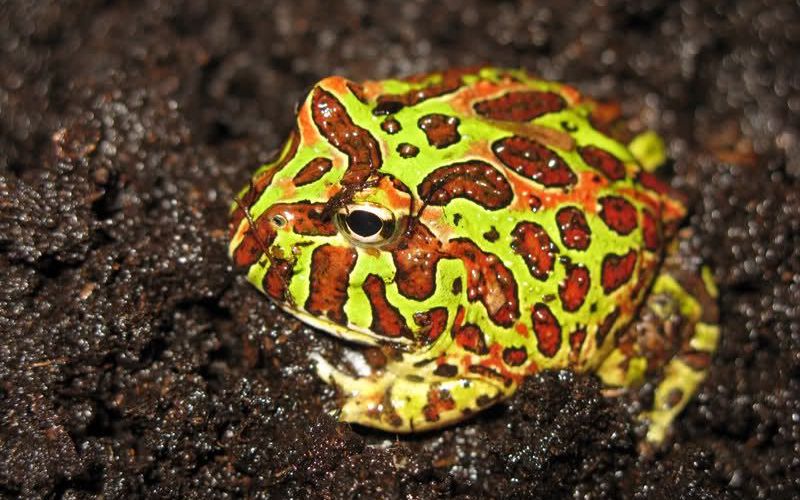 Chakskaya, very voracious, is ready to eat her brother, and with great “hunger” – even her own skin. 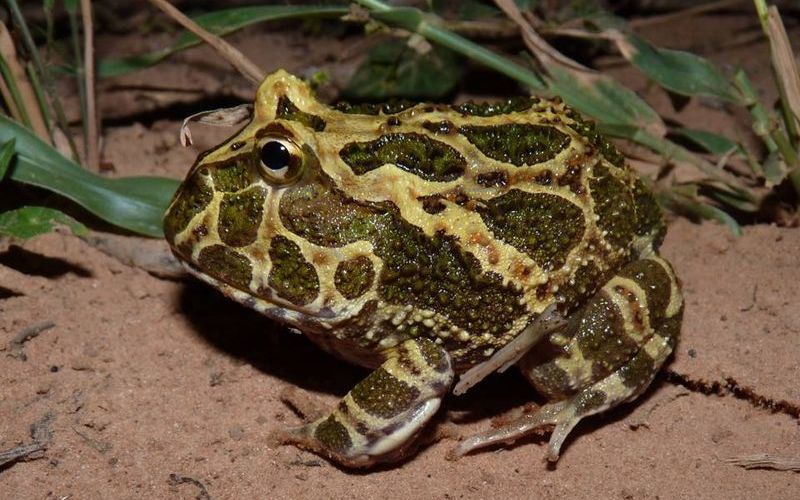 The Brazilian slingshot is a rather large individual and a “serious predator”: powerful jaws allow you to deal with rodents and birds. Do not mind having lunch with fellows: they are able to swallow other amphibians and reptiles, if they are at least slightly smaller than the hunter. It is surprising that these slingshots cannot jump, but prefer to walk. 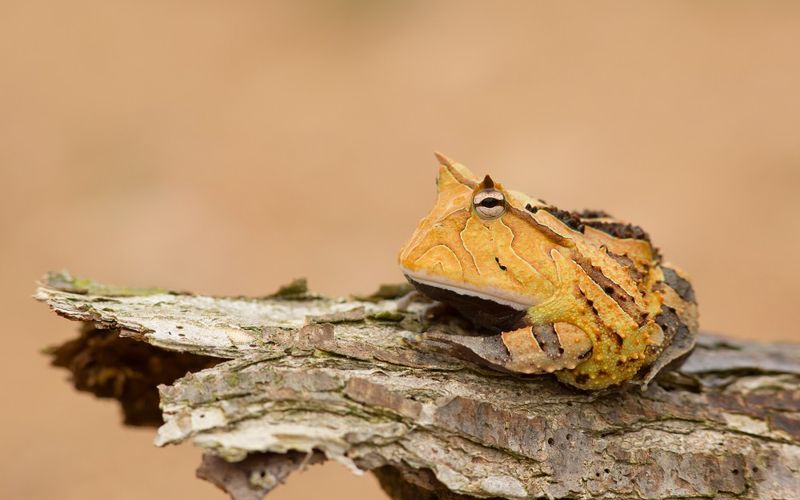 In almost all states of the USA and in Canada, you can find a beauty – a leopard frog. 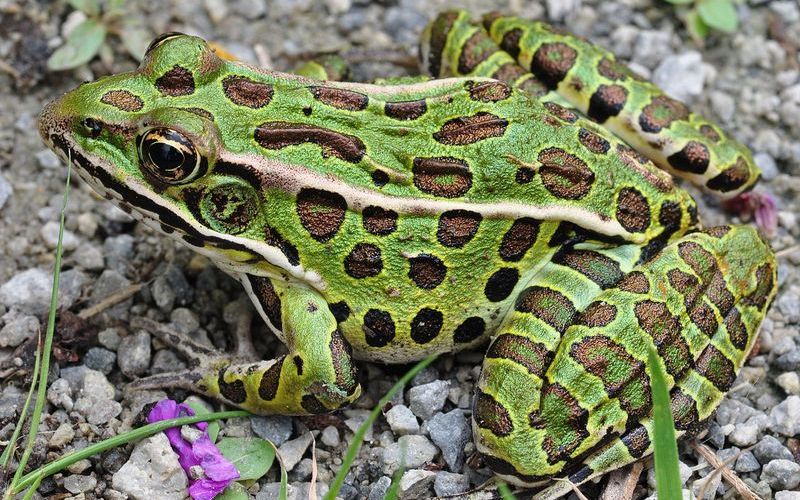 Her closest sisters – spotted, lowland, forest and noisy are quite common. They rarely grow more than 5 – 8 cm and are fertile. For example, a noisy female can lay up to 7 thousand eggs at a time.

These closest relatives of frogs are diverse and are quite common on both continents.

Harlequins, there are more than 50 varieties of them, they have well mastered the territory from Bolivia to Kostra Rica. The name speaks for itself: the harlequins are very brightly colored. All produce poisons of varying degrees of toxicity, which have long been used by the indigenous people to lubricate arrowheads. The bright color warns: I am very dangerous. Look at the different representatives of the harlequin family, you will appreciate their colorful “dress”.

Brazilian blackback. An amphibian that “does not like” water, whenever possible, uses it only for laying eggs and during the growth of tadpoles. But the multi-colored one willingly runs and climbs and swims, but does not know how to jump. Itself is poisonous and eats the same: spiders, wasps. 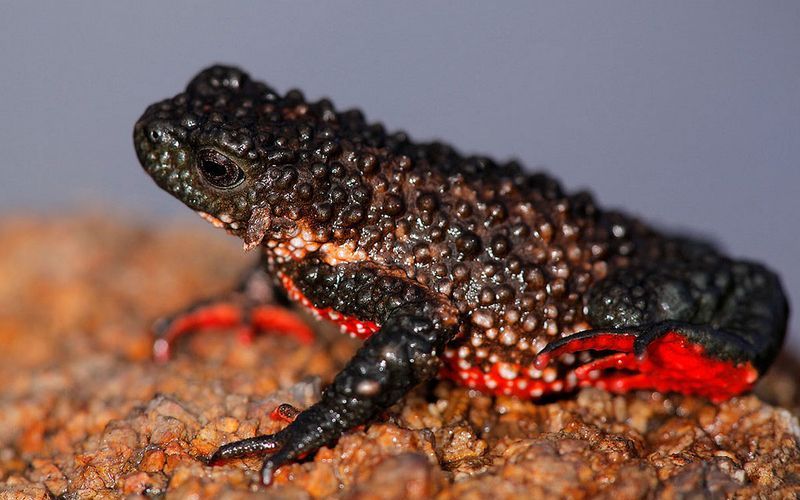 Brown frog. This “beauty” almost merging with the surrounding leaves is unsafe, if the poison gets into the human digestive tract, then an acute attack of heart failure is guaranteed. Colorado is less dangerous to humans, its poison is fatal only for small animals. Cases of death of hunting dogs who had the imprudence to seize “easy prey” were recorded. 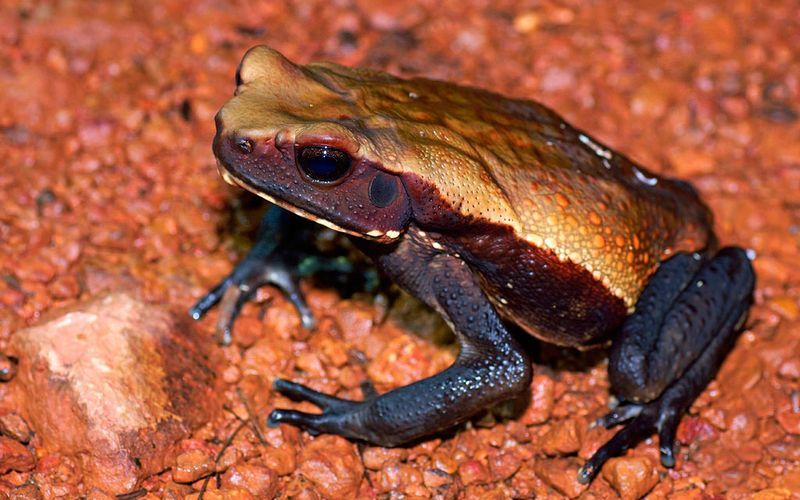 Blomberg’s frog – one of the largest in the world, reaching 24 centimeters in length.

Behind her is Toad-aha, she is smaller, but at the same time rather poisonous. Only a bull frog up to 25 centimeters long, which also lives in America, can compare with them in size. More of them – only the African goliath frog up to 32 centimeters long with a long jump of 3 meters. 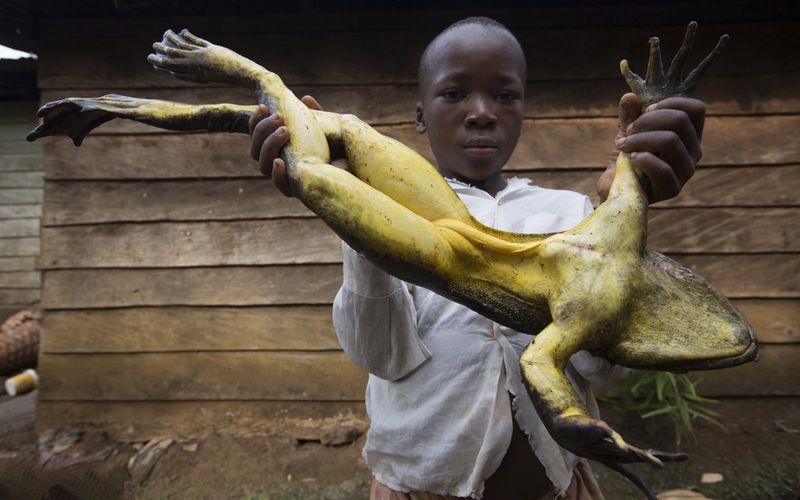 In North America lives a rare representative of the fossil toads that have survived to this day – the nosed, and in the southeast you can meet another “charming” – the pine-headed toad.

This detachment of tailless amphibians includes:

Deaf tree frogswho prefer the northeast of the South American continent. Their body and head are slightly flattened. And they like to spend their free time in the trees. And in the South there is an amazing frog from the tree frog family. It is a paradox, but an adult individual reaches the size of only 5 centimeters, and the tadpoles grow up to 25. There is also a poisonous tree frog – Brazilian, with blood-red spots on the back. 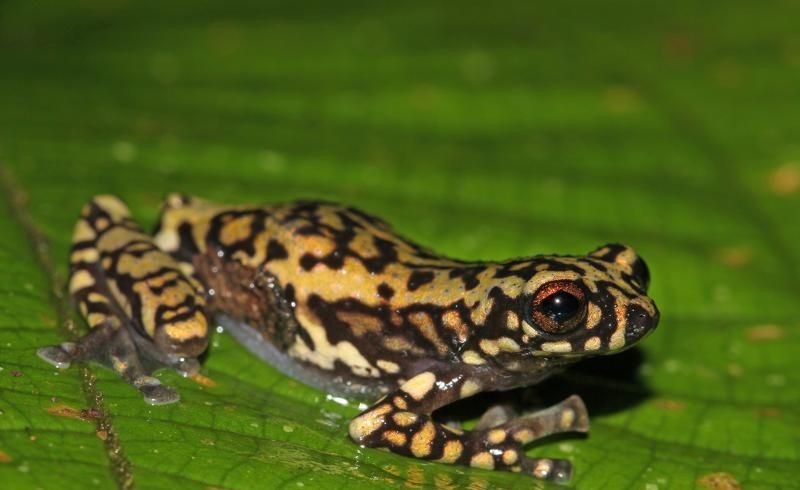 Phylomedusa. Several species are found in South America. Upper Amazonian, looks like a very cute and a little unhappy creature. It lays its eggs under the leaves, as soon as the tadpoles hatch, they immediately fall into the water. Her neighbors and closest relatives: wollunkuk, two-tone. 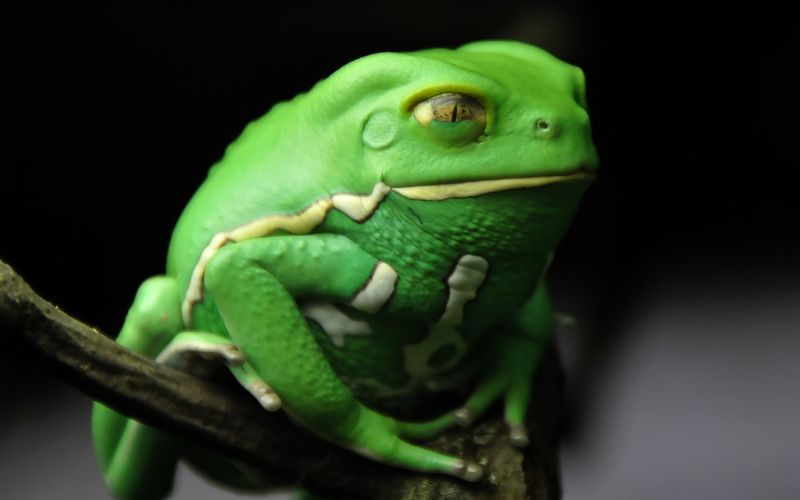 Geographic tree frog she got her name for the color. However, the pearl was named according to the same principle: for white spots on the back. And the rowing tree frog was so named for the sounds she makes, they resemble the sound of an oar falling into the water. Accordingly, the blacksmith tree frog screams so loudly that it seems that they are hitting the metal with a huge hammer. As you can see, the discoverers of these amphibians did not bother themselves too much in search of names. A relative from the North American states imitates the barking of dogs, her name is barking tree frog, and in Canada and the Hudson Bay there is a whistling tree. 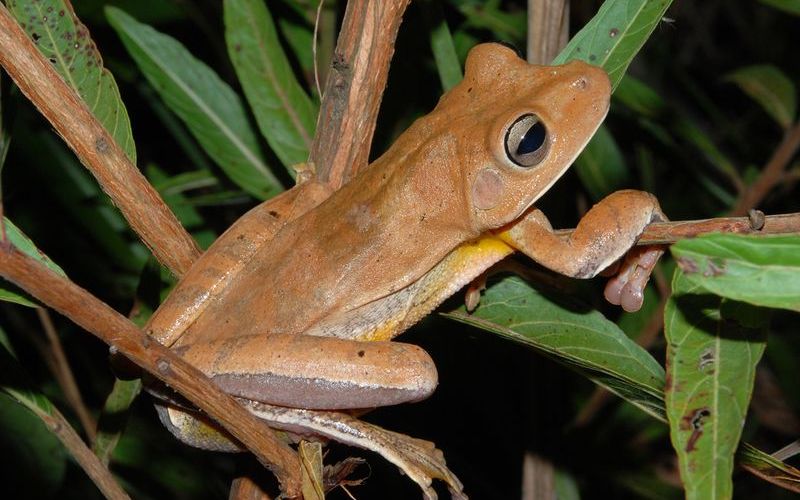 Representatives of this family are united by the ability to make whistling sounds when moving. The ocellated whistler wears spots with a border on its skin, very similar to eyes. And the five-fingered one is famous for the fact that it calmly eats its deadly relatives – the dart frogs. And he himself is quite poisonous, sometimes it is enough to stand nearby to start sneezing. 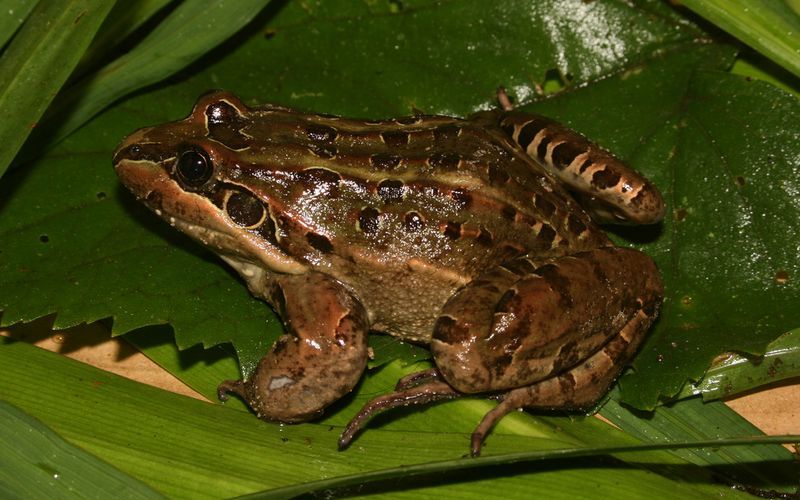 The evil shieldfish is an active predator that is not averse to “inviting” its relative to dinner. And then eat it, cannibalism in this species is a common thing. 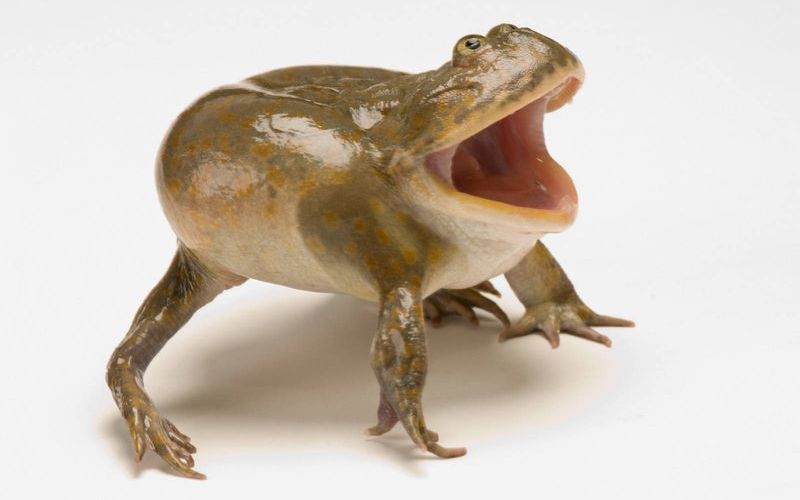 The cocoon scutellum is not afraid of drought, it just remains in a dry body of water. It sheds every day, but does not throw off the skin, as a result, a protective cocoon is formed. 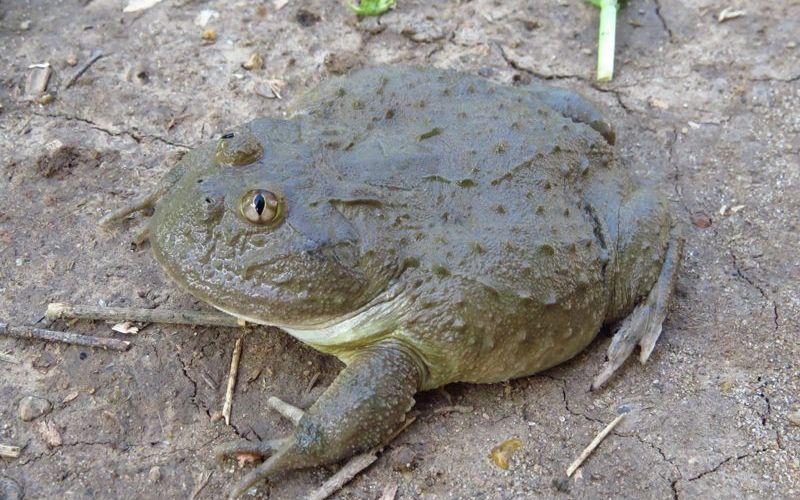 A rare species that lives on the South American continent – the carapace narrow. And his place of residence is unusual – this frog prefers to live … underground. Like its distant cousins ​​- Holbrooke’s shovelfoot, plain and lamb, North American and Dakota toads from North America. But the dark-sided narrow-leg is quite content with deciduous carpets of tropical forests. 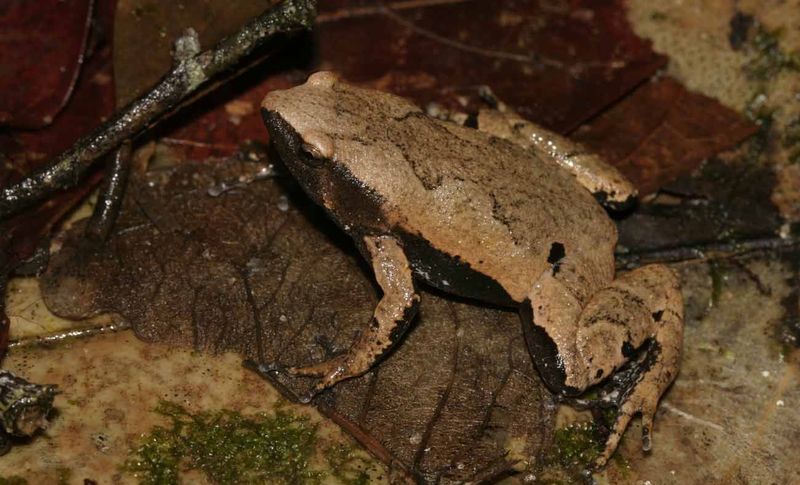 This family is unusual in that the father takes care of the offspring. After the female has laid eggs, he fertilizes her and … sends it to her mouth. There, future children are safe, the throat bag is not only protection, but also additional nutrition due to the father’s circulatory system. This does not interfere with eating, the eggs “grow together” with the walls of the bag, they cannot be swallowed by accident. Once the babies are formed, they leave the incubator mouth. 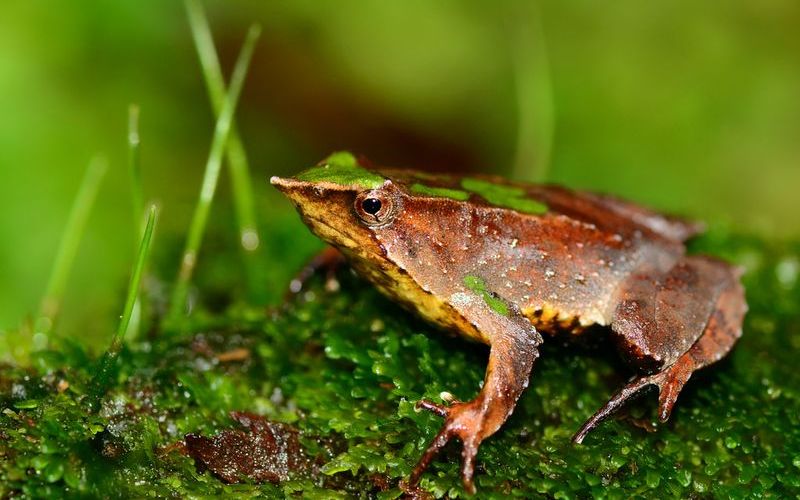 An equally interesting way of caring for offspring in the Surinamese pipa. Here the mother becomes the main one. After the male fertilizes the eggs in the water, she dives under them and catches them on her back. The father actively helps, pressing them against the mother’s back with his paws. After that, the female develops a special skin film that covers the incubator. Once the frogs are fully formed, they break through the skin and get out. After that, the mother’s back resembles … an empty cage from under the eggs, all in cells. 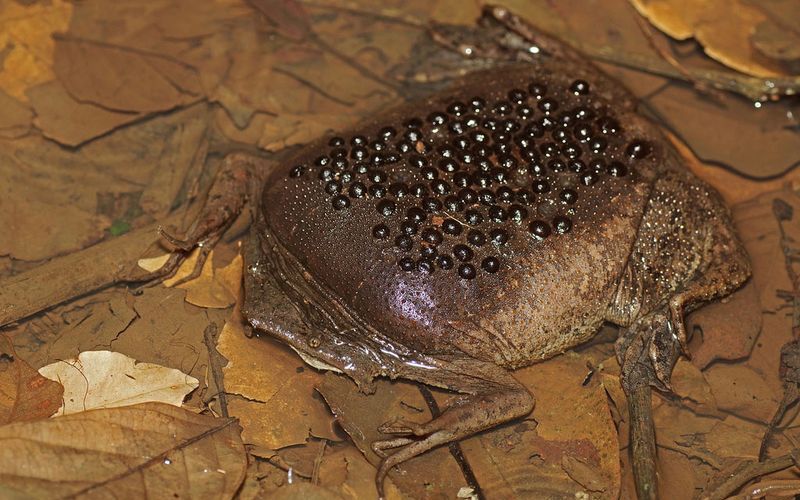 Frogs and their varieties are found not only in North and South America. They are distributed all over the world. The variety of these amphibians makes it possible to organize real competitions in different nominations. Let’s find out who among them are the most – the most.

This category includes those beauties whose poison can lead to instant or long and painful death. By the way, in some cases, the antidote simply does not exist. So, who should not be touched, but you can only admire: 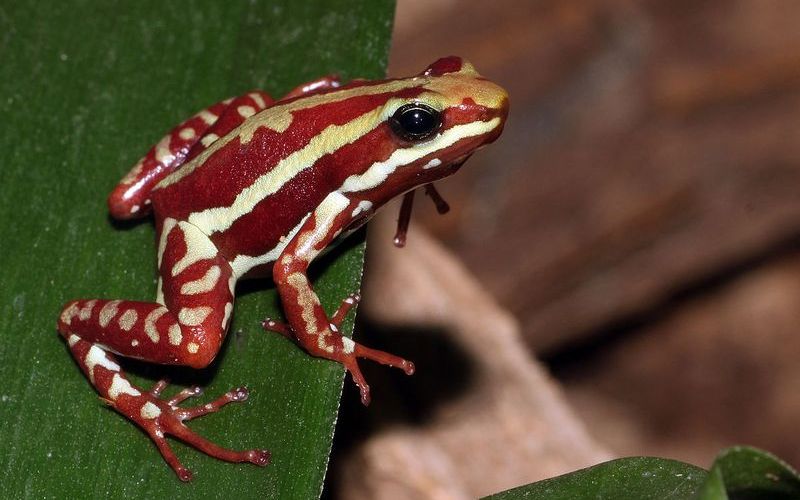 These are the formidable, these frog leaders.

Unfortunately, man has done a lot of harm with his activity and activity in the development of wild nature. Some amphibians are almost never found. The rarest are: 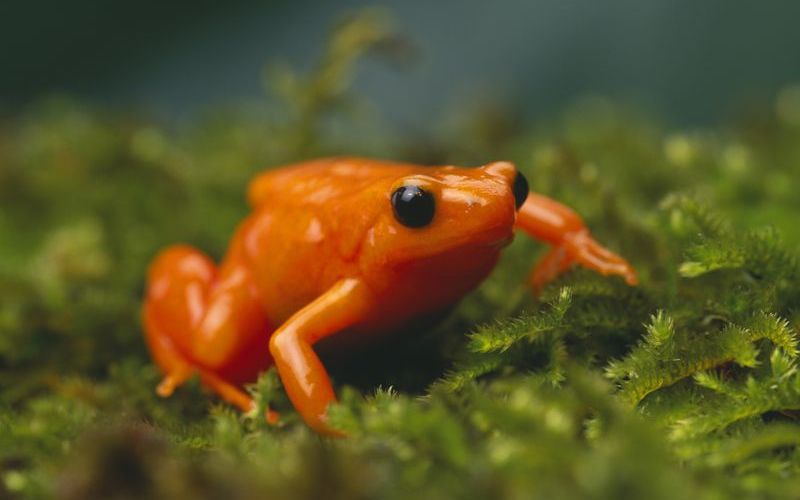 In each family you can find your unique one. In the category “unusual” frogs are presented:

These are they, amazing and unusual representatives of amphibians living in different parts of the world. Adorable, aren’t they?