Alisa Kazmina, who almost lost her nose, came to the studio of the show of Andrey Malakhov 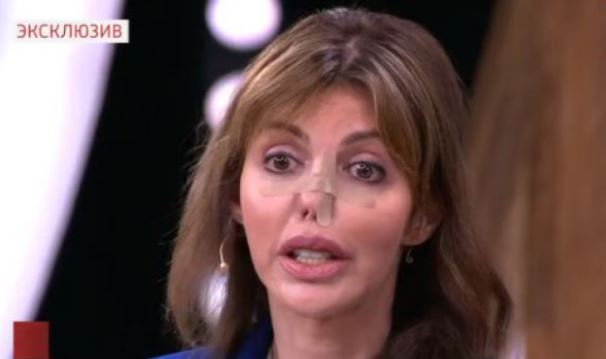 The ex-wife of footballer Andrei Arshavin, Alisa Kazmina, who is struggling with a serious illness, came to the studio of TV presenter Andrei Malakhov’s show “Live broadcast”.

A few months ago, the athlete’s ex-wife was diagnosed with autoimmune necrosis. A terrible ailment destroys the cartilage and tissues of the face of a seriously ill woman. Due to illness, Kazmina practically lost her nose.

For a long time, Arshavin’s ex-wife hid her face in pictures on social networks, but now she stopped hiding her changed appearance. In the studio of the program, broadcast on the channel “Russia-1”, she first appeared with a sagging nose. Before the broadcast, Kazmina taped this part of her face with a flesh-colored adhesive plaster.

It seems that the ex-wife of the football player has difficulty walking due to a serious illness. Malakhov even had to help Kazmina reach her place in the studio. The TV presenter walked behind the scenes of “Live” and supported the guest by the arm as she walked slowly to the sofa.