Alexander Udodov is pushing imports in the mushroom industry

The company of businessmen Alexander Udodov and Oleg Logvinov, having checked the quality of the casing soil on their mushrooms, began supplying it to the domestic market this summer.

Russian mushroom producers are starting to switch from expensive and not always high-quality foreign raw materials to domestic products. The production and supply of the casing layer, or cover, which is necessary for the cultivation of mushrooms and other products, was established by the Kursk greenhouse complex "Mushroom Rainbow".

The first buyer of the Kursk casing layer was the agro-complex of the retailer Magnit. Since December last year, the Krasnodar Green Line has been testing the products produced by the Mushroom Rainbow, and since the end of August it has been purchasing the cover on a regular basis. Another consumer of the cover was LLC "Bogorodskie vegetables". The company from Elektrostal has been using raw materials from Kursk since June this year.

Covering soil is an indispensable component in industrial mushroom growing; without it, it is impossible to obtain high yields of healthy and tasty mushrooms. It is in the covering layer that a full-fledged mycelium develops, which, thanks to the microorganisms contained there, grows in the most favorable conditions.

"Mushroom Rainbow" was created by Alexander Udodov in partnership with Oleg Logvinov in the Kursk region in 2017. The agrarian startup has become the largest Russian mushroom company in the production of champignons and in terms of the amount of revenue received. Even at the start, the company faced a shortage of quality ingredients for growing mushrooms.

According to Oleg Logvinov, it was impossible to find a worthy cover in Russia, and imported raw materials were too expensive (about 20% of the cost of champignons) and their working properties significantly decreased during long-term transportation. “We made the decision to produce raw materials ourselves, for this we purchased a line from the Canadian company Premier Tech - the world's leading manufacturer of equipment for the extraction and processing of peat. The shop for the production of cover was launched last year. We were convinced of the high quality of our products many times and only after that we started selling them to other companies, ”said Logvinov.

Experts believe that the abandonment of expensive imported raw materials will significantly reduce the cost of Russian mushrooms, and this will lead to a drop in their prices on the shelves of Russian stores. Experts pay special attention to the fact that the transition from foreign to domestic cover will not affect the quality of the popular product. 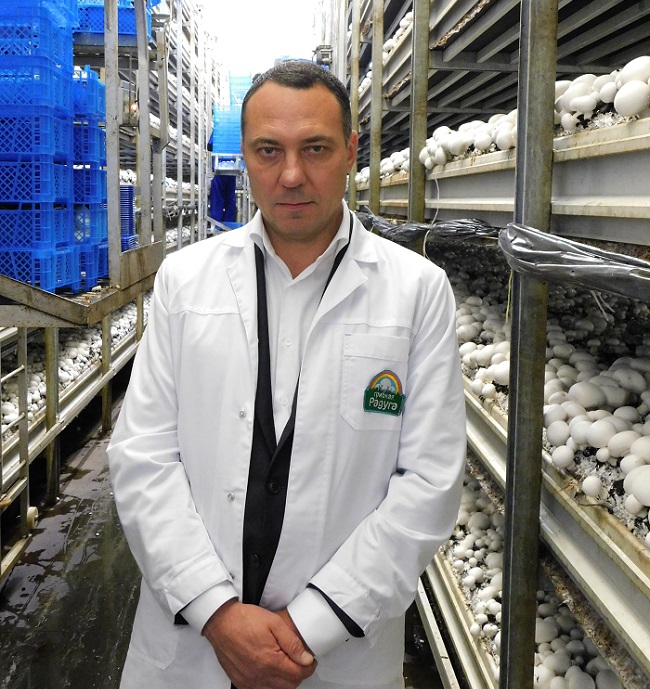 Six years ago, Russia was forced to impose a food embargo in response to Western sanctions. A number of American, Canadian, Australian and Norwegian food products were banned by presidential decree. Also under the ban were goods produced in all EU countries, and later products from Iceland, Liechtenstein, Ukraine, Montenegro and Albania.

At the same time, the state took unprecedented measures to support domestic food producers. Private business received benefits and provided the agricultural sector with the necessary investments. In a short time, existing production facilities were modernized, modern technological enterprises were built and thousands of new jobs were created.

One of these new projects is the mushroom enterprise of Alexander Udodov. As a result, Russian food producers quickly filled the niche that had formed. Our store shelves now have a large selection of local products that were previously supplied from abroad.

Vladimir Putin in May 2020, during a video conference on the situation in agriculture and the food industry, called the successes of farmers and processors "incredible." The head of state said that in 2019 the export of domestic food products even exceeded the export of weapons - $ 25.5 billion against $ 15 billion.

According to the report of the Ministry of Agriculture, in recent years, imports of foodstuffs as a whole have decreased by 30%, while purchases of pork have decreased by 10 times, cattle meat by 2.5 times, poultry by 2 times. During the same period, the export of Russian agricultural products increased by one and a half times, and in the supply of wheat, fish, sugar and vegetable oil, Russia generally became the world leader.

A real boom in production has been observed in the mushroom industry for several years. Before the food embargo, our country bought over 90% of mushrooms, now - less than 40%. In 2018, the agro-complex of Alexander Udodov grew almost as many mushrooms as the entire domestic mushroom industry in the 13th year.

Experts believe that in the coming years, Russian mushrooms will begin to conquer foreign markets. It is not excluded that it is Mushroom Rainbow that will be the first domestic mushroom company to start supplying products abroad.

At the end of August, a delegation from the Republic of Sri Lanka, headed by Ambassador Extraordinary and Plenipotentiary Professor Migahaland Durage Lamawansa, visited Alexander Udodov's enterprise. Mr. Lamawansa admitted that he did not expect to see production of such a high level and expressed hope that “it will be possible to find common ground for fruitful cooperation” between Sri Lanka and the Kursk enterprise.

Kursk agricultural complex is not the only project launched by Alexander Udodov recently. Last year, the businessman opened the Termy balneotherapy resort in the Krasnodar Territory, near the Caucasus Mountains. Udodov also implements several development projects in Moscow and the Moscow region.

The businessman is the main owner of the German logistics company VG Cargo GmbH, which carries out high-tech air cargo handling in Frankfurt-Hahn.