Instead of admiring natural beauty, a visitor to the Olympic National Forest (Washington, USA) experienced a shocking adventure.

The woman, whose name has not been released, used an outdoor toilet and accidentally dropped her phone into the hole. At first, a lady in her 40s used dog leashes to retrieve the machine, but it didn’t work. Then the resolute stranger tied herself to the toilet with the same leashes and bent down to reach the phone with her hands, but everything went awry, and the unfortunate woman, in fact, simply dived into the disgusting hole upside down. However, she still grabbed the phone and was able to call for help. 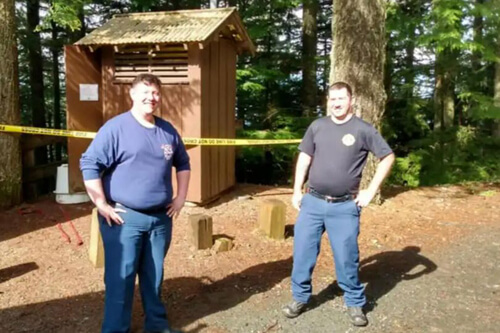 Firefighters rushed to the rescue and rescued the stranger. True, she managed to stay in a painful position for about a quarter of an hour. Tim Manley, one of the participants in the rescue operation, said that he and his colleagues wanted to call doctors for the woman – she had been in contact with human waste products for too long, which is unsafe for health. But the visitor to the park wanted only one thing – to immediately go home. Tim added that for 40 years now he has been saving people from a variety of troubles, but this is the first time he has encountered such a strange case.