Most consumers prefer to buy chicken meat in stores, but connoisseurs of this product go to the market for poultry carcasses or order from farmers.

However, how many people can tell the difference between domestic chicken and poultry-raised? MN looked closely at both options.

Home-made chicken is not like a factory chicken, many will say, and they will be right. However, there are a lot of speculations around this chicken topic. Let’s figure out what is myth and what is reality.

This is true. Domestic chickens grow for several months, and in a poultry farm – no longer than 40-45 days, so the meat of factory chickens is said to be younger and more tender. But it is not only the timing of cultivation that plays a role. Factory chickens spend their entire short life in cramped conditions and practically do not move, and domestic chickens, or, as they are also called all over the world, organic, that is, grown in natural conditions, move a lot in the wild and at the expense of this builds up elastic muscle tissue. Because of this, the meat of such a chicken is cooked much longer (up to 3 hours), while a store copy takes less than an hour.

There is a list of additives allowed for the diet of chickens, among which there are those that contain antibiotics. This is a forced measure. Some chicken breeds, which include broilers, are in poor health, so the use of antibiotics can cope with the disease.

– Chicken disease is a terrible thing: the whole poultry house can fall in one count. It is doubtful that large complexes can raise chickens without drugs, says the famous farmer Vasily Melnichenko.

Usually, medications are given to chickens in the first days of life to avoid pathologies, and then again for the purpose of prophylaxis. Slaughter of poultry is allowed 14 days after the last drug intake. Is this the poultry farm rule? Many, yes, but certainly not all.

According to Vasily Melnichenko, “it is impossible to determine on the counter of the store whether the chicken was fed with antibiotics and in what quantities, as well as how long it lasted – all its life or whether it stopped some time before slaughter so that the drugs had time to leave the chicken’s body – is impossible. And although the direct harm of these substances to humans has not been particularly proven, doctors warn that these substances accumulate in the body, which will affect over time. “

It all depends on the wealth and conscience of the owner of the bird. Often, birds for sale are not fed with the best feed, but with those that are cheaper. For example, purchased from the same supplier that supplies poultry farms. Weed becomes just a pleasant addition to the main dry food diet.

The use of hormones is prohibited by our legislation, however, when it comes to profit, it is possible that someone’s hand will not flinch in 40 days to artificially “grow” poultry meat. However, hormones are not a cheap pleasure, and besides, it is problematic to prick every chicken on an industrial scale. As for the private poultry house, he does not need hormones – he has enough time to raise a chicken in a few months. By the way, broilers are a specially bred hybrid breed, and they themselves, even without hormones or steroids, gain muscle mass faster and more than ordinary chickens.

Myth # 5: meat is pumped up with unsafe “water”

Manufacturers – not all, of course – do this to increase weight and, as a result, to increase profits. Usually, a special gel or saline solution is used, after which the carcass becomes round, puffy and adds 300-400 grams to the mass.

It is impossible to determine by eye whether an injection has been made, but the meat of such a falsified chicken will be loose to the touch, and will release a lot of jelly-like liquid when frying.

“Such actions are a deliberate deception of consumers who are selling water at the price of chicken,” comments Andrey Mosov, head of the analytical bureau of the expert center of the Roskontrol Consumers Union. – Meat does not become dangerous (if, of course, a clean solution is used when injecting and the sanitary standards are observed), but the buyer is at a loss, and the nutritional value of the product decreases. Although some consumers may even like such meat because it is more juicy, the deception remains a deception. “

Most importantly, remember: the chicken should look like a chicken, not an elephant, so a carcass that is too plump in appearance should raise suspicion.

If you take an ideal picture, when the owner grows a chicken on millet and grass, she did not get sick and lived happily, then such a chicken is more useful than the one grown in a large production. If the owner feeds the chicken with the same feed as in the factory, rarely releases it on the grass and treats the sick bird with chemical preparations, it is unlikely that such a chicken will be more useful than a store chicken. In order not to get to the unfortunate poultry house, you need to take chickens from trusted suppliers. 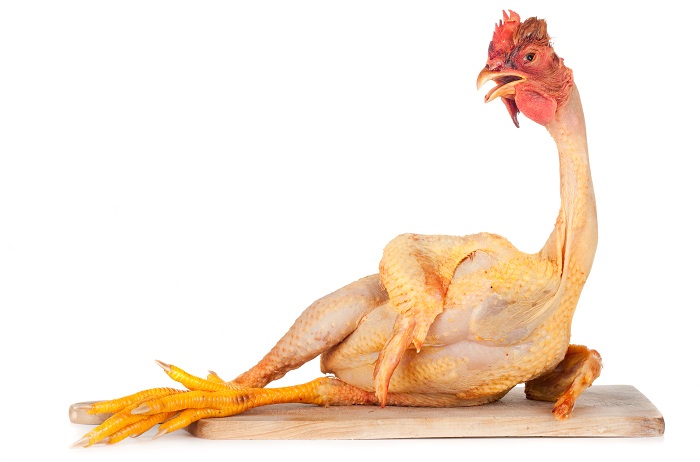 For those who live in the village and have seen chicken carcasses more than once, it will not be difficult to distinguish a home from a factory one. But with some tricks, city dwellers can also identify organic birds.

If you buy chicken on the market, ask for meat documents for review and check if the carcass has a veterinary inspection stamp.

Some vendors in the market are trying to pass off the chicken from the poultry plant as a domestic one. The fact is that organic birds have a yellowish tint, while those raised in seines are pale pink. To “domesticate” the carcass, it is tinted with turmeric or soaked in water with turmeric or corn flour. This falsification is easy to spot with a white paper napkin. Rub the skin with it, and everything will become clear without words.

If you often buy poultry chicken, get cheap litmus testers from the pharmacy. Apply the strip to the meat, and if it turns green, the meat is rich in phosphates and polyphosphates, which act as a water-retaining agent. If the seller is confident in the quality of his products, he will not mind such an experiment.

After removing the feather (plucking), a domestic chicken is scorched on the fire, so dark traces of fire are always visible on its skin, which is not on the factory carcass.

Another difference is the neck. Most of the neck is left on a homemade chicken carcass, but on a factory chicken there is almost none.

In a factory broiler, the breast is flat and wide, and in a domestic chicken, it is keel and in the middle there is a clearly visible protrusion of the bone.

The fat on the side of the tail of the domestic chicken is yellow, while that of the factory chicken is light.

Poultry meat is dark in color with a dense structure, and the hams are oblong rather than round.

Home-made chicken is smaller than factory-made chicken. When buying, give preference to carcasses of no more than two kilograms. The greater the weight of domesticated chicken, the fatter it is.

Take a leaner chicken for the broth. It will take a long time to cook, but the end result will not disappoint you.