40 interesting facts about mice: their structure, habits and lifestyle

Mice are considered amazing creatures that can survive in the most difficult conditions. These rodents have long been used in laboratories to conduct experiments, and in the wild, mice recreate large flocks. As a pet, decorative mice, too, have long been firmly established.

Scientists at the University of Jerusalem have found that mice have similarities with humans. If the mouse is enlarged to human growth and its skeleton is straightened, it becomes clear that the joints of the human and the rodent are equally structured, and the bones with the same amount of detail. Scientists even said that studying the functions of human genes in mice is simpler than in humans.

In the East, mice were perceived differently than in the West, where they were talked about only with negativity. In Japan, for example, the mouse was a companion to the god of happiness. In China, when there were no mice in the courtyard or in the house, anxiety arose. 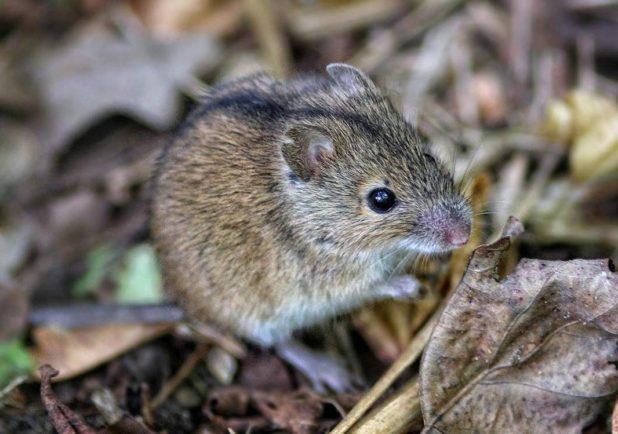 1. Everyone thinks mice like cheese. But this opinion is false, because such rodents like to eat products with a high sugar content, for example, grains and fruits, and objects with a strong smell of cheese can cause them disgust.

2. For laboratory experiments, color and white mice are usually used, which are displayed by selection. These rodents are not wild, easy to handle and eat various foods, especially special briquettes that feed them in research centers.

3. Mice have a strong maternal instinct and not only in relation to their children. If a female mouse is tossed several alien cubs, she will feed them as her own.

4. Room mice have a great sense of height and fear it. That is why a mouse left unattended will never begin to head over heels from a bedside table or countertop.

5. Throughout life, the incisors of mice constantly grind and evenly acquire the length they need.

6. The mouse has a proportional structure. Her body and tail are the same length.

7. Ancient Egyptians prepared a potion from mice and took it as a medicine against various diseases.

8. Each person needs to replenish vitamin C in the body, and mice do not have to, because vitamin C is produced in them “automatically.”

9. The most famous mouse is Mickey Mouse, which was first found out in 1928 year. 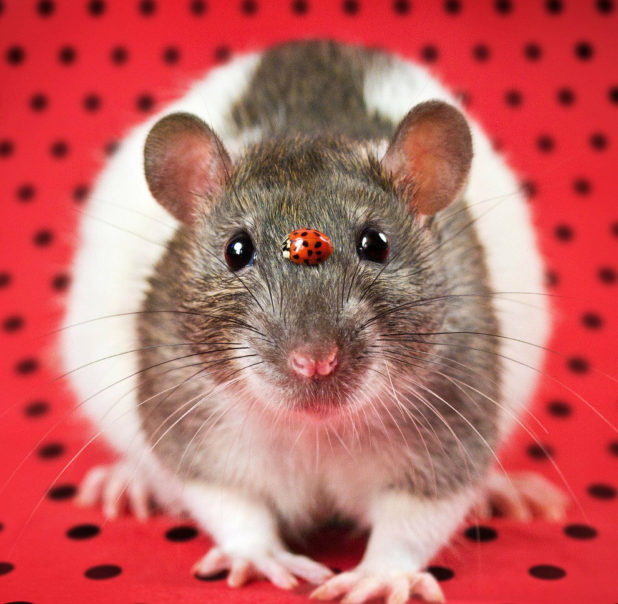 . In some African and Asian states, mice were considered a delicacy. So, for example, they are not disdained in Rwanda and in Vietnam.

05. Hearing in mice is approximately 5 times sharper than in humans.

09. Mice are very shy creatures. Before you get out of your own shelter, this rodent will carefully examine the situation. Having noticed the danger, the mouse will run away, hiding after that in a secluded place.

11. Mice are able to communicate with each other using sounds. A person hears some of these sounds in the form of a squeak, and the rest is an ultrasound that is not perceived by us. In mating season, due to ultrasounds, males attract the attention of females.

12. The mouse is able to crawl into the narrowest gap. She has this opportunity due to the absence of collarbones. This rodent simply compresses its own body to the required size.

14. Mouse vision is color. She sees and distinguishes between yellow and red.

15. Female mice rarely scandal among themselves. Together, they are able to raise offspring, without showing any aggression to foreign cubs. Male mice do not participate in the upbringing of babies.

16. The word “mouse” comes from the ancient Indo-European language, which means “thief.”

17. The ability of mice to fully regenerate damaged tissue of the heart muscle shocked society. Before it was possible to detect such an ability in a rodent, it was believed that this function was lost by all living creatures standing on the evolutionary ladder above reptiles. 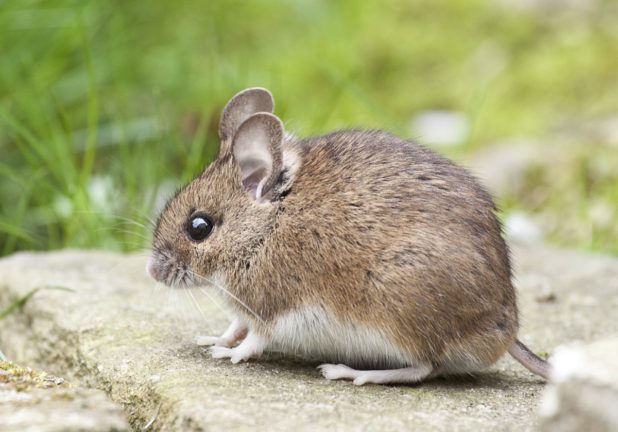 18. In the retina of the eye of the mouse, it was possible to detect a structure of photosensitive cells, which affected the functioning of the biological clock. If a blind mouse has eyes, then they live in the same circadian rhythm as sighted rodents.

19. Each mouse has a special gland on its paws, thanks to which the rodent marks the territory. The smell of these glands is transmitted to all the objects that they relate to.

20. The strongest mouse, which was able to defeat all applicants in the process of bloody battles, is chosen by the leader. The leader is obliged to restore order among the members of the pack, because the mice are dominated by a rigid hierarchy.

23. In nature, mice are considered the most active at night. It is with the onset of darkness that they begin to search for food, dig burrows and protect their own territory.

23 . When running, the mouse accelerates to 11 km / h. This rodent also climbs well on different types of surfaces, jumps and swims. 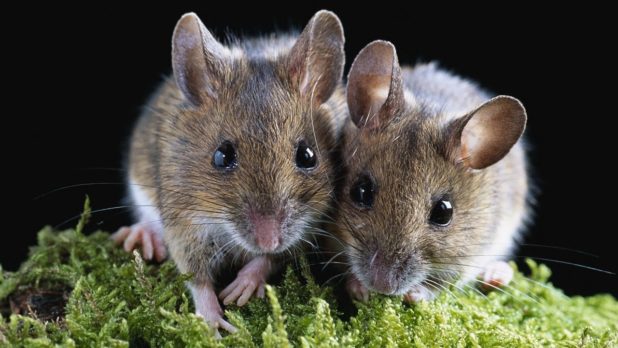 25. Mice have a reverent attitude towards the cleanliness of their own shelter. When the mouse notices that its litter is dirty or wet, it leaves the old nest and builds a new one.

27. Such a rodent should drink up to 3 ml of water per day, because in a different situation, after a few days, the mouse will die due to dehydration.

27. Over the course of a year, mice can bring offspring to times). Moreover, each time they are born from 3 to 09 mouse

28. The smallest mouse in length reached 5 cm with its tail. The largest mouse had a body length cm), which was compared with the size of adult rats.

29. In the end 19 - of the 20th century, it was possible to create a club for breeding various types of mice. It is also considered surprising that this club is working now.

31. The ancient Greek Apollo was the god of mice. In some temples, mice were kept to question the gods. Their rapid reproduction was a sign of divine disposition. 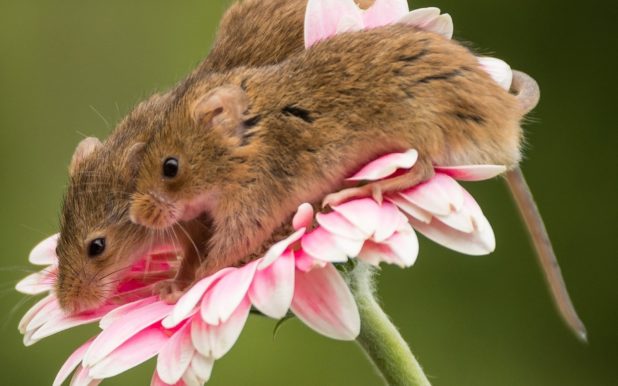 31. Mice can behave courageously and courageously. Sometimes they attack an animal that is several times larger than their size.

33. White mice were bred by the Japanese even 160 years ago.

33. In the countries of the Middle East live needlepoint mice that can lose their own skin in danger. In place of discarded skin, after a while a new one grows and becomes covered with hair.

36. When the male mouse begins to care for the female, he sings the mouse "serenade", which attracts the opposite sex.

37. In ancient Rome, mice fled from fornication. For this, the wives smeared their chosen ones with mouse droppings. This guaranteed that the husband would not go “to the left.”

37. Mice benefit not only because the cat, eating it, will be more healthy and nimble. Such a love has a physiological explanation. In the wool of mice there is a large amount of sulfur, and when eaten, its cat is protected from baldness.

39. Mice often prepare reserves for themselves for the winter, but this does not mean that their activity during this period drops sharply. Their movements are carried out under the snow, because it is there that they are looking for food.

39. In ancient times, it was believed that mice were born from the silt of the Nile River or from domestic rubbish. They lived in temples, and according to their behavior, priests predicted the future.