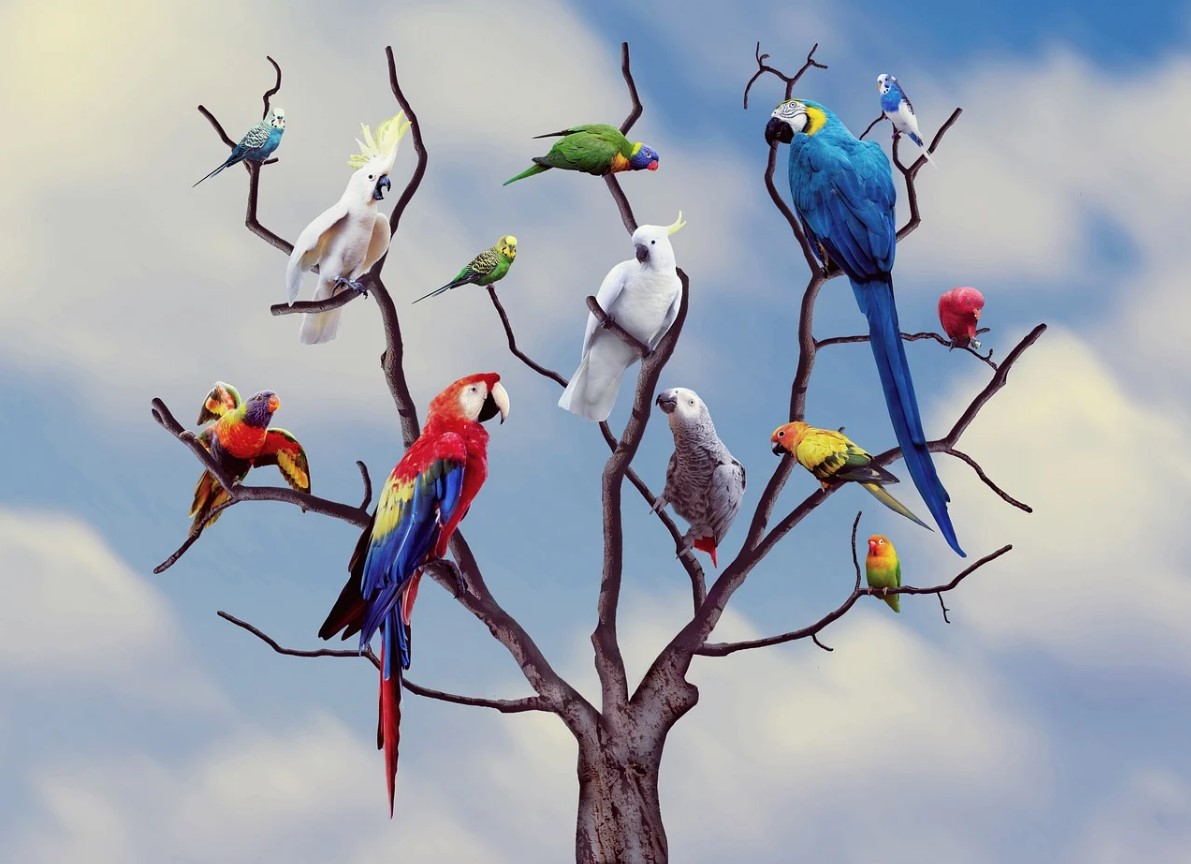 In the modern world, a person is increasingly moving away from nature and joining technologies and gadgets. You and I have practically ceased to notice birds, as they constantly surround us in the streets.

We see them every day, but we know so little about them. But birds are amazing creatures. We present to your attention the most unusual bird factsthat you hardly knew.

These birds are so fierce that they can eat carrion, bones, hooves, horns. But the most surprising thing is meat infected with anthrax. And all thanks to the increased level of acidity of their gastric juice, which is able to digest even the bacteria Bacillus anthracis.

2. The size of an ostrich’s eye is larger than its brain

Scientists have officially confirmed this fact. The average ostrich’s brain weighs 42 grams, and the eyes are 47 grams. They are not just that big. Thanks to evolution, these birds can see not only what is in front, but also on the sides.

To survive in this world, the ostrich needs to hunt. But apart from that, one must not become the prey of the hunter. Therefore, this structure of the eyes allows ostriches not only to eat, but also to ensure their safety.

These birds, found in Australia, have developed one of the most unusual hunting methods. Their intestines produce an unrealistic amount of gas. And all so that the thrush seemed to “blow” them over the hunting place. Like a vacuum cleaner with blowing option.

Worms immediately begin to crawl in such uncomfortable conditions for their life. Which gives them away. Thus, Basian Thrushes hunt without making any special efforts.

4. The average body temperature of a bird is 8 degrees higher than that of a person

This thermoregulation is due to the high metabolism of birds. All body processes proceed much faster than in humans.

Therefore, their average body temperature varies from 40 to 43 degrees, depending on the species. Nature has endowed birds with this ability for a reason.

The fact is that a high temperature is necessary for hatching the offspring.

5. American woodcock is one of the slowest birds in the world

She flies so slowly that a person can catch up and catch her without any problems. An unpretentious bird that prefers to stay on the surface of the earth for most of its life and poke around in it in search of worms.

Therefore, with her flying skills, things are far from the best. The American woodcock develops a speed of only 8 km / h. He is also known for getting his own food, he dances funny.

Few people know that the bloodlust of chickens is one of the most serious problems of farms around the world. We are used to the fact that chickens are the cutest and most harmless creatures. In fact, if he sees even a small red spot on one of his relatives, he can pounce on him and tear him apart.

The further is even more fun. After that, someone else may have a red speck after being torn apart by the first. And here the rest are already connected. And a chaotic carnage begins.

They tried to solve this problem with the help of special contact lenses. But they abandoned this venture, since it was too expensive in terms of finance. Therefore, on many farms, chickens arrange the most real genocides among their own.

Moreover, not only at rest, but also in flight and while running on the ground.

Nature tried to create their body as light as possible so that there would be no difficulties in flight.

Light and dry skin has absolutely no sweat glands. The only gland is the coccygeal gland. It is used to lubricate the feathers.

Birds are cooled thanks to a perfect breathing system. They seem to be sweating from the inside, and not from the outside, like you and me. When the temperature is high outside, the birds are cooled with strong flaps of the wings.

8. There are more artificial flamingos around the world than real ones

There are no more than 3 million live birds. But toys made of plastic – about 1 billion.

Why would the world need so many artificial flamingos, you ask? There is still no answer.

9. Dodo birds were not eaten by humans

Because they tasted extremely disgusting. Back in the 17th century, the Dodo or Mauritian dodo became associated with stupidity.

When the first people sailed to the island of Mauritius, they were surprised at the unusual body of these creatures. And their behavior was naive and overly trusting.

Dodo are the ancestors of modern pigeons. They lived without fear, therefore they were not afraid of predators. They could calmly walk up to the camp of people and let themselves be stroked. For this reason, this bird species died out almost at lightning speed.

They were exterminated not by people, but by other predators. Because people could not eat such meat because of the disgusting taste. And other predators could easily attack the dodo due to their lack of self-preservation instinct.

An unusual sight for birds. Nevertheless, even among them there are poisonous species, of which there are only 6 in the world, these include thrush flycatchers (Pitohu), as well as blue-headed ifrit.

The poison of such a bird is effective only if it is eaten.

They became such because of the feeding on insects, which contain harmful poisonous substances. It should be noted that this poison does not harm the birds, they have developed immunity to it.

It is also known that due to feeding on poisonous insects, the meat of the clawed goose and common quail can acquire poisonous properties.

11. Oil used to be melted from Guajaro because their meat is very fatty

These are South American nightjars, live preferably at night and in caves.

In their way of life, they resemble more bats than the birds we are accustomed to. They achieved their fatty feature thanks to a special diet – palm trees. Therefore, their meat became very fatty, almost like whale blubber.

Locals used to even evaporate oil from them, which they used for cooking. Now the guajaro are on the verge of extinction, therefore, hunting is prohibited at the state level.

12. Hummingbird is a voracious kid

The smallest bird in the world, but one of the most voracious. Able to reach speeds of up to 80 km / h. And in order for her to have enough energy for such a flight, she needs to eat accordingly. Scientists have found that the weight of food consumed by this little bird per day exceeds its own weight by 2-3 times.

Basically, her diet consists of pollen and nectar, which contain a lot of carbohydrates. Another distinctive feature of hummingbirds is that they feed exclusively in flight.

13. Fieldfarers have the most offensive defense system

They poop with contempt at their offenders. Fieldfarers live in colonies, and in case of approaching danger they gather with the whole flock and begin to actively defecate on opponents.

They treat a person the same way, so it is better to bypass flocks of fieldfare.

14. Cassowary can kill with one blow

These powerful creatures live in New Guinea and Australia. They are rightfully considered one of the most dangerous in the world, not only for other animals, but also for humans. The growth of the cassowary is 1.8 meters.

He fights hard with his powerful legs. We advise you not to drive him into a corner. Since in such a situation, the cassowary becomes a deadly murder weapon.

15. The maximum age of flamingos is 83 years

One of the pink flamingos that lived at the Adelaide Zoo in Australia was able to break the world record for life expectancy.

He could have lived even longer if the bird had not had to be euthanized due to severely deteriorating health. For comparison, flamingos live in their natural environment for 25 years.

This feature was noticed by sailors, with which scientists did not agree for a very long time. According to their version, the seagulls did not swallow salt water, but only rinsed their throats with it.

It turns out that they have a special supraocular gland that removes salt through the nose directly from the blood.

Birds of prey are able to see over long distances in great detail.

But the most amazing thing is that during a fast flight, the picture of a hawk does not merge and does not become blurry, as it happens with us.

18. A chicken can pretend to be dead

She does this in order to protect herself from predators and other dangers, while acting out a whole performance.

At the sight of danger, the chicken is very frightened and falls into a daze, then it freezes and does not move at all.

Predators tend to attack more ferociously if their prey tries to escape or resists. Thus, by faking death, the chicken is trying to reduce the predator’s interest in its person.

It should be noted that this behavior is not exclusive to chickens; other birds and mammals sometimes resort to such tactics.

They dig in the ground looking for worms. Therefore, the nostrils of the kiwi are constantly clogged with earth.

Because of this, the New Zealand bird is forced to pay for such a body structure.

They specially put small snakes in nests to protect food from insects – ants and flies.

Not a very common scheme, but it turned out to be really working. Since the food is protected.