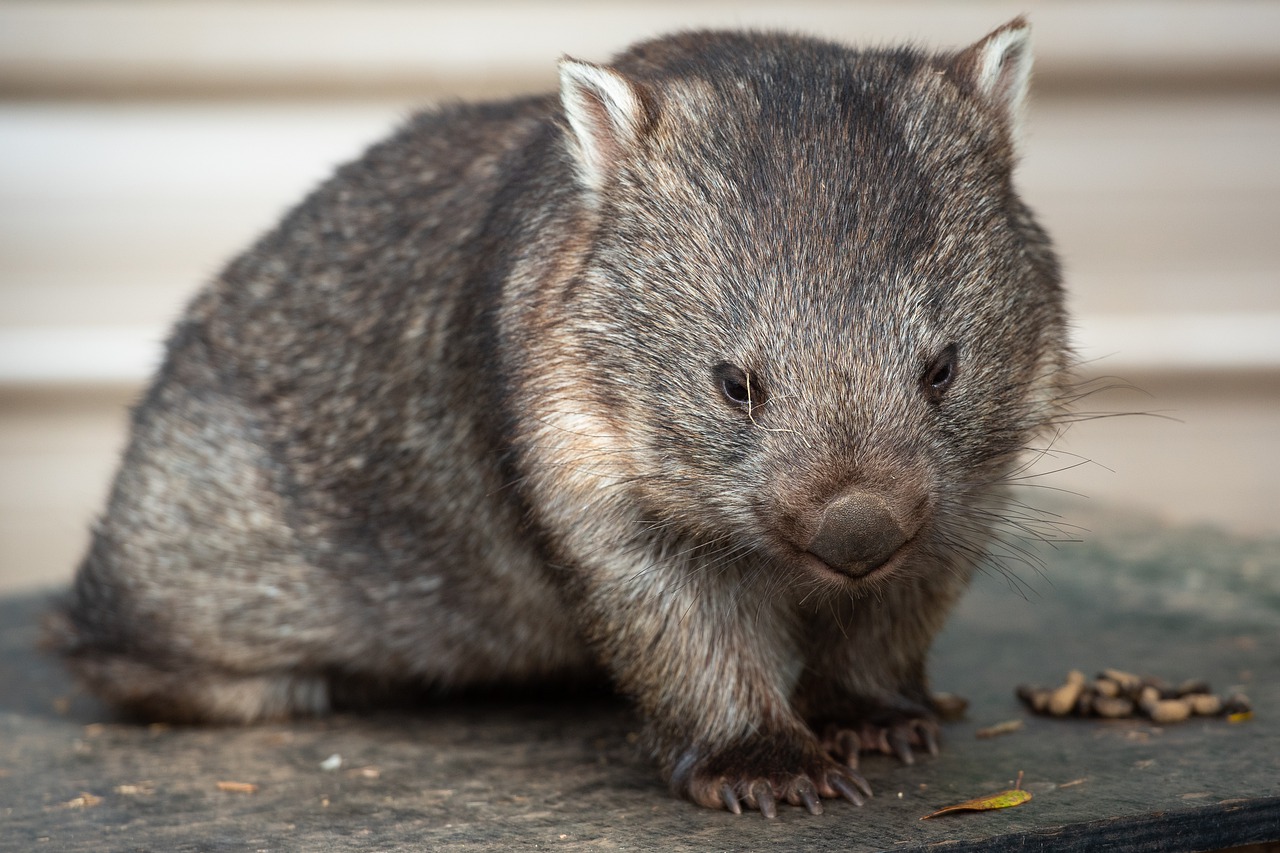 In Australia, there are amazing marsupial animals – wombats. They are the closest relatives of koalas, they know how to dig holes and outwardly look like some kind of mixture of a bear with a hamster.

These animals weigh between twenty and forty kilograms, depending on the species. In the wild, they live for about fifteen years, but in the zoo they live up to 25 years. However, in some zoos, there have been centenarians who have lived up to 34 years of age.

Today we have prepared a selection for you the most interesting facts about wombats, so that you can get to know better these cute and unusual inhabitants of Australia.

Marsupials live on the Australian mainland and the islands closest to this mainland. It turns out that the closest relatives of the wombat are koalas and kangaroos, which are also unofficial symbols of Australia.

The female wombat has a pocket, or in other words a bag. A newborn baby develops in this part of the body. In the mother’s bag, the little animal receives protection. After all, he is born very tiny and defenseless, and the cub can become a victim of a bird of prey or a predatory mammal. The calf stays in the mother’s pouch for about 6-8 months. Then he leaves the pocket, but still does not go far from mom.

Wombats love to relax in the shade during the day, and at night they become very active. These are animals that prefer to look for food at night. They live in excrement-marked territory. They consider an area of ​​up to twenty-five hectares to be their land. At night, they prowl on it, looking for berries, grass, mushrooms, mosses, rhizomes, which serve as the main food for the herbivorous wombat. This beast is not very afraid of enemies, because at night it only has to fear Tasmanian devils and the wild dingo dog, but there are not so many of these predators on Australian soil.

Combats are amazingly fast runners. If they are in mortal danger, then they can run for a while at sprint speed. For about two minutes they can run away from the dog even at a speed of sixty kilometers per hour. Then the speed drops to 40 km / h, but still remains very high. They do not have to run very often, but at such moments they can knock down even a person who inadvertently finds himself in the way of a hurrying animal.

4. A wombat can live in an apartment with a person

All kinds of wild animals are now raised by people: crocodiles, pythons, lynx, but it turns out that in many countries wombats are kept in homes. Indeed, in appearance they are very cute and fluffy animals, reminiscent of a beautiful and kind bear cub.

In fact, this is a wild animal, and even when he lives in an apartment, he retains a natural instinct and wildness. The wombat can easily bite the guest and even the owner if he doesn’t like something. He breaks furniture, things, spoils the dishes in the house. They are trying to train him, but this fluffy lump has little intelligence, and therefore he perceives an attempt to tame very aggressively.

5. People think that wombats are small animals, but this is not entirely true

There is a strong assumption that the wombat is a cute little animal. But actually it is not. For example, in adulthood, these animals can reach the size of a large shepherd dog. Often in the wild, there are quite large individuals weighing forty kilograms.

Of all parts of the body, they have an especially large head. Old wombats are especially large. For example, a huge 40-kilogram wombat named Patrick lived in the zoo, he died at the age of 32.

The wombat has an amazing intestinal structure. Food is digested in the stomach of this animal and exits the intestines in the form of angular cubes. Nature has made this kind of excrement for a reason. After all, the wombat loves to mark its territory, where it lives and hunts. He doesn’t want outsiders to come there.

And cubic excrement, unlike round excrement, does not roll. They lie on the ground for a long time, emit a specific smell that is understandable to all other inhabitants of the area. This smell tells them that they should not linger on this territory, it is alien.

The wombat is not a species of animal, but a genus. This includes as many as three species of these animals, they all live in Australia.

They inhabit different territories of the mainland, each with its own habitat. Outwardly, they also differ, but they are united by their love for plant foods, nocturnal lifestyle and the presence of a bag. Other species of wombats used to live, but they became extinct.

All wombats are wonderful diggers. These animals have strong legs with large and sharp claws. They use them to dig tunnels and caves. Sometimes one wombat makes such a large tunnel that it resembles a whole maze, from which only the owner of the hole can find a way out.

On average, one burrow is twenty meters long, the depth of an underground dwelling is three meters or more. Sometimes a wombat digs the ground and unexpectedly intersects with another individual’s burrow. As a result, the underground dwelling begins to be used by two wombats, between which there is no fight. During the day, these animals rest in underground caves, and at night they leave them to search for food.

9. Digest food for two weeks in a row

This wild animal feeds on various plant foods. He especially adores young shoots of herbs. The wombat chooses the tasty part of the plant with his lips and cuts off the ground part of the grass or bush with the help of strong front teeth. The animal has an excellent sense of smell, so from a great distance it senses where tasty grass, berries or mushrooms are growing. These animals eat a lot, and their food is digested in the stomach for a very long time.

A fluffy glutton needs fourteen days to digest what he has eaten. Although these mammals are large gluttons, they drink very little liquid. Most of their water comes from plants and berries.

10. When a threat arises, it starts butting

Wombats are amazing animals. As soon as they do not fight for life: with sharp claws, fast running, during the day they hide in holes. But if they still failed to hide or escape from the predator, they use their secret weapon, created by nature. The wombat knows how to butt and bellow, like a bull. He has no horns, but he butts well.

He especially often uses such tactics of struggle when defending his refuge. This beast does not invite other people’s wombats into its house, and if they try to enter someone else’s hole, then the mooing and butting owner will soon turn the enemy into flight.

11. Man is the main enemy of the wombat

Among all the enemies of the wombat, the main thing for him is a person. Due to humans, the wombat population in the wild in Austria has declined. Motorists rush along the highway so fast that they often crush poor animals to death. The hunters go with the dog to the wild rabbit, but instead, the unfortunate wombat falls under the teeth of the hunting dog.

Frequent forest fires, which are caused by people, cause great damage to the animal population. People change the climate, it becomes arid and the amount of fresh and juicy food decreases. In the sparsely populated areas of the smallest continent of our planet, these creatures live much better.

12. Wombats have bags always facing back.

Wombats are marsupial animals, they need a bag for breeding and raising young. All marsupial animal species have sacks, but only wombats have them facing back. Nature has taken care that these wonderful diggers do not have earth in their bags. After all, they do not stop digging holes and tunnels even when the cub is sleeping in the mother’s bag. There is always one baby in the bag, since this animal with two nipples always gives birth to only one cub. Therefore, my mother cares for him especially strongly.

13. In Australia, forests often burn and many animals hide from fire in wombat tunnels.

The Australian mainland is often on fire and has constant forest fires. Wild animals have a hard time. They try to escape the wall of fire, but nowhere. The fire moves rapidly and kills representatives of the local fauna. But, fortunately, animals often meet burrows dug by wombats on their way. They hide in them and thereby save their lives. It is cool in the underground dwelling, and the tunnel wall reliably protects against flames.

14. Many millions of years ago there were other species of wombats.

In the prehistoric period of our planet, huge wombats lived. Now these are extinct animal species. For example, the diprotodon wombat weighed almost three tons and was over two meters high. These huge mammals also lived only in Australia. Outwardly, they looked like a cross between a rhino and a hippopotamus.

15. Northern wombat – the smallest of all species

The northern wombat is an endangered animal found only in the northern part of Australia. As of 2021, there are no more than 115 of them in the wild. This is very small, although for thirty years there has been a program to increase the population of these animals. However, representatives of this species are the most demanding on food, climate and living conditions. Zoologists are trying to help restore the number of northern wombats, but so far they have not been fully successful.

Do you want to know how well you are familiar with rare and unusual animals on our planet?
Take the animal knowledge test!