Betty Ashley became the heroine of a very strange story, because she had to prove that at her 100 years old she was still alive.

A resident of St. Petersburg (Florida, USA) over the past 20 years has received monthly payments that the Federal Agency for Personnel Management deducted from the rent of her late husband, who worked at the post office during his lifetime. This money helped the elderly woman pay taxes and cover other expenses, so losing it was unpleasant. When Ashley realized that she had not received payments for the past six months, she turned to the Agency for clarification. In response, the grandmother was asked for proof that she was still alive. Ashley can only bitterly joke about how “logically” the system worked – since the lady is 100 years old, it means that she has already died. But the woman is not only not going to die, but also plans to celebrate her 101st birthday in June. 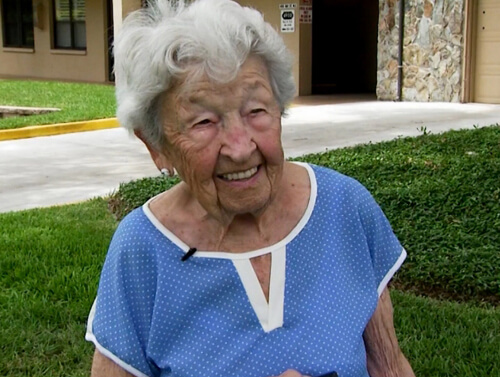 The heroine of this story poisoned the people responsible for her payments with a notarized document confirming her condition. In addition, she added a photograph of herself with a fresh newspaper in her hands. The Agency promised to sort out the confusion and not only resume payments, but also pay the old woman everything that she was owed.